This is the harrowing moment lifeguards and surfers lose the battle to save a 94 stone ox from drowning off the coast of Brazil after it escaped from an cattle fair.

Video shows rescuers trying to drive the Nellore bull back to the shore in a bid to prevent it from wading further into the strong currents on Thursday 29 around 11am.

However the animal appeared to have a death wish and refused to return to the Stella Maris beach in Salvador, in the north east state of Bahia.

Lifeguards spent more than two hours struggling to persuade the ox to get out of the water. They used surf boards, buoys and threw a rope across its path to stop it from going deeper and lassoed it in an effort to pull it clear. 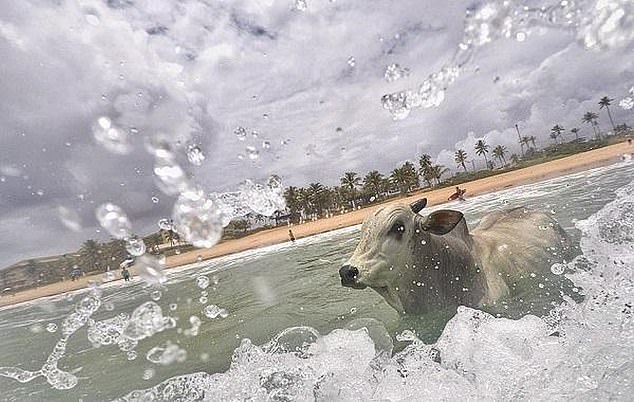 Witnesses said the bull was ‘very scared and stressed’ at the beach in Salvador, Brazil

Lifeguard Januário Brito said: ‘We managed to get it to the sand three times, but he kept going back into the water.  As if he knew what the outcome of his life was so it didn’t matter anyway.

‘We had no choice but to surround it to see if we could get him to the coast, but he was very scared and stressed. He even got angry and tossed his head and made a run for us even in the water.’

Despite all efforts, the confused creature ploughed on and was eventually pulled under by the current and overcome by the waves

Video taken on the beach shows dozens of rescuers hauling the beast out of the sea on surfboards with a rope attached to its muzzle and attempting to resuscitate it by raising its head and administering side compressions.

As it lay on the ground, there was an almost imperceptible twitch of its ear, but the massive ox had swallowed too much water and passed away seconds later. 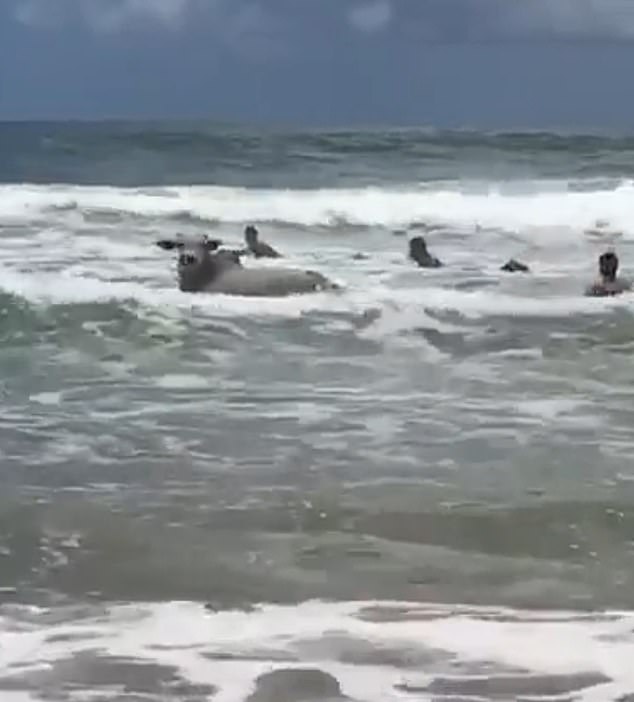 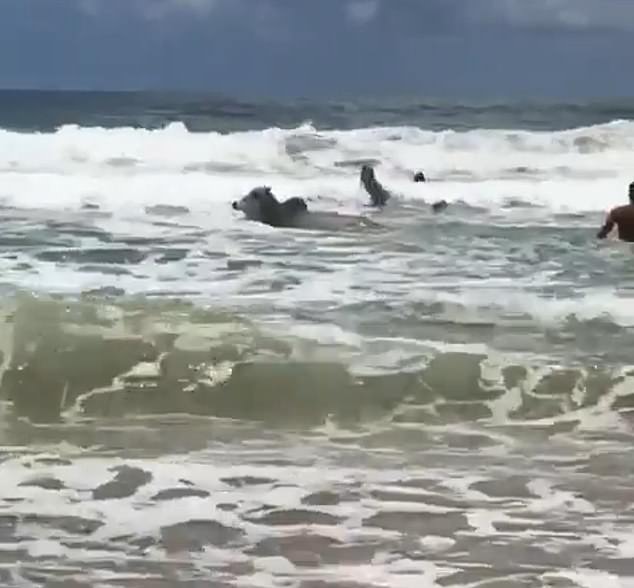 The half-tonne animal, normally considered a docile domestic breed and worth around around 4,500 reais (approximately £950/$1200), broke loose last Saturday shortly after being unloaded at the Fenagro international cattle fair.

A team of cattle farmers tried to capture the three-year-old bull, but it escaped into bushes and disappeared.

It was later spotted roaming around the back of Deputado Luís Eduardo Magalhães, Salvador’s International Airport on Wednesday but made a bolt for freedom when military police officers on horseback and cattle hands tried to corner it.

The hefty creature headed for the sea and was finally found already shoulder deep in water on the Stella Maris beach.

One eye witness, Douglas Pedrosa, told local media: ‘To see an ox in the ocean was unbelievable.

‘He went into the surf and was out there [in the sea] just walking. I know these animals are built to swim across rivers and such, but I’ve never seen one attempt this at sea.’

Fenagro issued a statement regretting the outcome and explained that as soon as the ox fled on Saturday ‘a team from the fair tried to capture him, but the animal disappeared into a patch of vegetation which prevented the rescue.

‘An operation to capture of the animal was restarted on Thursday morning by cattle handlers with the support of military police and mounted cavalry.

‘During the exercise the animal escaped in the direction of the beach and entered the sea,’ the statement said.