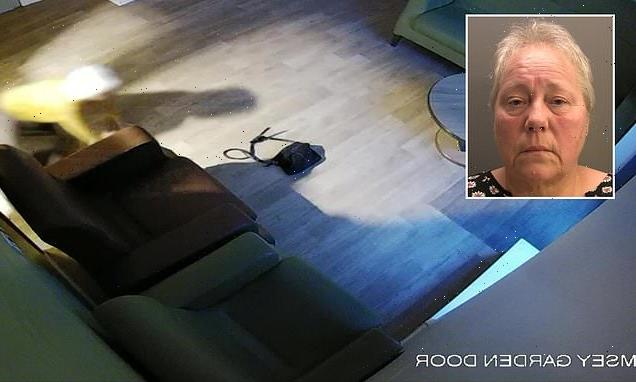 Moment female hospital care worker shoves a dementia patient, 88, to the ground, leaving her screaming on the floor in pain with broken hip – as she’s jailed for 19 months for GBH

A video shows the moment a health worker shoved an 88-year-old dementia patient over causing her to break her hip.

Jane Beverley Griffiths, 66, was jailed after being caught on CCTV pushing frail Matilda Connell to the ground in a hospital mental health unit.

A court heard how she showed ‘callous indifference’ as she watched her writhe in ‘excruciating pain’ on the floor.

She then claimed the elderly patient had fallen by accident, telling staff at Furness General Hospital, Cumbria, that she’d tripped. 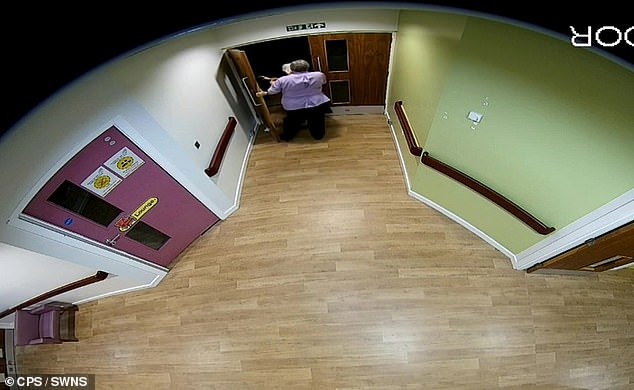 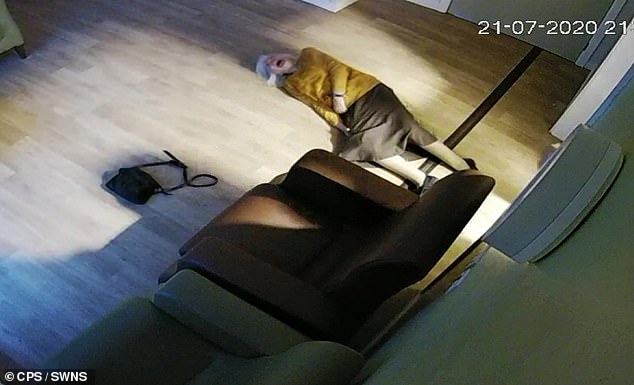 Matilda was left screaming in pain after being pushed, while Griffiths stood over her without reacting

The shocking video footage played during her sentencing revealed how she grappled with Matilda in a hallway before pushing her onto the floor of a side room. 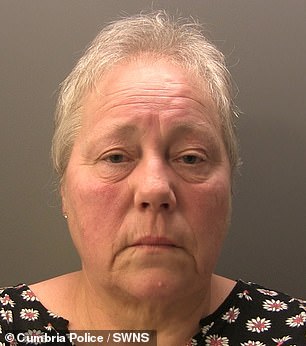 Jane Beverley Griffiths (pictured), 66, who shoved Matilda Connell, 88, over in a hospital mental health unit which broke her hip, has been jailed for 19 months

In the footage, Matilda can be heard screaming out in agony as Griffiths turned off the lights and stood over her.

When medical assistance came, Griffiths claimed: ‘She has not said she is in any pain.’

The court heard how Matilda, who has Alzheimer’s and dementia, was moved to the unit after becoming ‘confused, agitated and anxious’ at the care home where she was living.

On the day of the incident, she had struck another patient with her handbag, and Griffiths, from Barrow, was told to move her to another room to calm her down.

The damning footage played in court shows her escorting Matilda towards the side room, before pushing her through the door, which causes her to fall down. 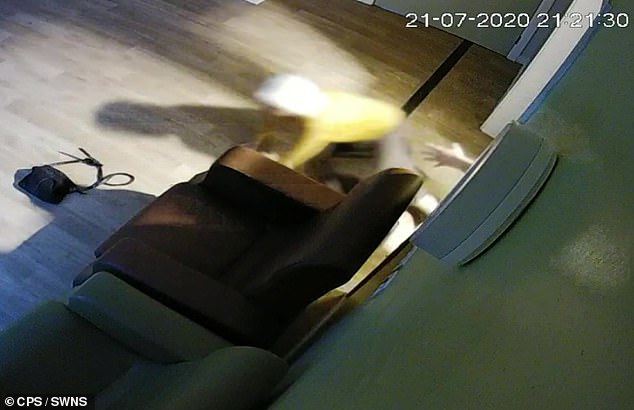 The forceful push broke Matilda’s hip as she landed (pictured), fortunately she was able have surgery the next day 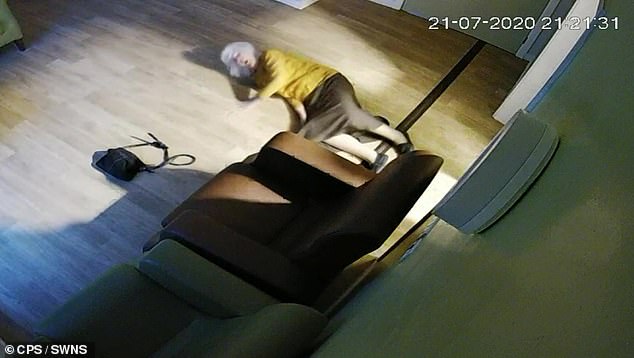 Matilda can then be heard crying out in pain and asking for Griffiths to ‘ring the doctor, quick’.

But the court heard how she failed to call for help and, instead, turned the light off in the room.

Staff later came to Matilda’s aid, and the following day, she underwent surgery for a broken hip.

The court heard how family members feared she would not survive the surgery given her vulnerability.

Matilda was said to have been left unable to walk unaided after the incident.

Griffiths was later reported to police by the unit’s matron after the CCTV images were reviewed by staff at the hospital.

In mitigation, Patrick Cassidy told the court how Griffiths had been well known in Barrow, having worked in the care sector for 46 years.

He went on to describe her outburst as an ‘isolated incident’

But Judge Darren Preston said: ‘Your immediate reaction was to protect yourself.

‘CCTV footage shows a rather different course of events to the ones described by you. You demonstrated a callous indifference to the pain she was suffering.

‘You were thinking only about protecting yourself. You still struggle completely to accept responsibility for what you did.

‘Your victim has lost independence and dignity as a result of the injury you inflicted on her.’

After the sentencing, Mrs Connell’s family said: ‘Throughout her life mum has always been a kind and caring person who constantly put the needs of others before her own.

‘At a time in her life when she needed specialised care and support she was badly let down.

‘The assault captured on CCTV shows a callous disregard for mum’s safety and well-being.

‘She was pushed over and left for sometime in a dark room in excruciating pain.

‘She suffered a broken hip and at the age of 88 required surgery.’