Police in Ibiza are now investigating the brutal assault on the man who caused a massive tailback by pretending to be asleep in the street. 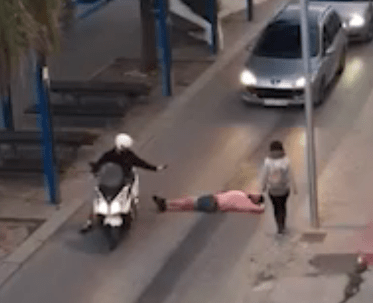 Footage of Tuesday night's attack, posted on social media, is now being studied by the Civil Guard.

The attack on the man, seen wearing shorts and a pink t-shirt, took place in the popular resort of Cala de Bou.

Stunned passersby looked on a 13-car queue built up down the road.

Despite drivers yelling and sounding their horns, the tourist refused to move. 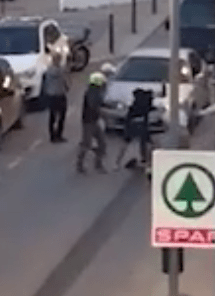 At one point, a motorcyclist drove past the man while giving him the finger.

Witnesses told the police at least six people set upon him "within a matter of seconds".

They claim the furious drivers dragged him out of the road before kicking and punching him.

One of the attackers is reported to have used a stick while another brandished a razor blade, though this is unverified. 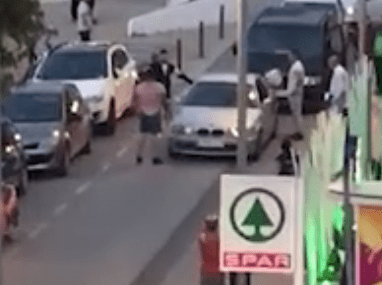 Footage does show a man in a black jumper swinging a stick at the holidaymaker.

After receiving dozens of blows, the British man manages to get up and stagger to the pavement.

Looking stunned, he takes his t-shirt off and squares up to one of the drivers.

The victim, who refused to file a complaint against his attackers, was later found by the police who said he appeared to have been drinking.

He is said to have refused to go to hospital but he did receive medical treatment at the scene from emergency doctors. He also declined to file a complaint against his attackers.