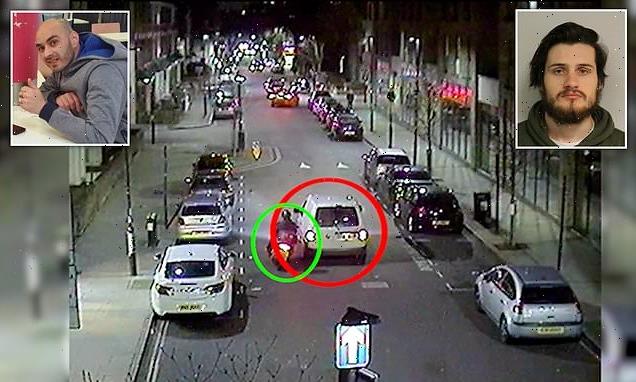 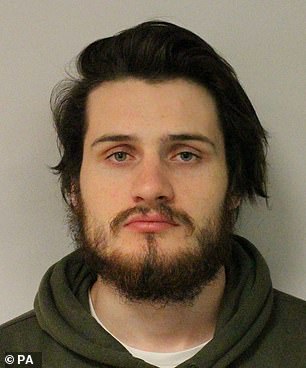 Nathan Smith, 28, will spend at least 21 years behind bars after being convicted of the murder of Takieddine ‘Taki’ Boudhane, 30

In an attack caught on brutal CCTV footage, plumber who brutally stabbed a Deliveroo moped rider to death in a road rage attack.

Nathan Smith, 28, was jailed for at least 21 years today after he knifed Algerian Takieddine ‘Taki’ Boudhane, 30, twice in the chest during a confrontation in Finsbury Park, north London, on January 3 2020 before fleeing to Europe for over a year.

He went on the run to Austria, Switzerland and Portugal the day after the murder, leaving Mr Boudhane’s family to endure 17 months of ‘torment’ as he refused to accept responsibility before being forced to face a jury trial, the Old Bailey heard.

Mr Boudhane’s father, Said, also died before the trial and did not live to see Smith jailed for life today as the killer was told he must serve at least 21 years behind bars.

CCTV footage released by the Met Police shows a moped driver attempting to overtake Smith’s van, which lead to a confrontation and the plumber violently lashing out.

Judge Mark Lucraft QC, sentencing, said Smith, of Archway, north London, had been ‘aggressive throughout’ the attack and had swung at his victim at least five times.

The attack happened in front of members of the public, including a witness who was ‘clearly alarmed’ by what she saw. 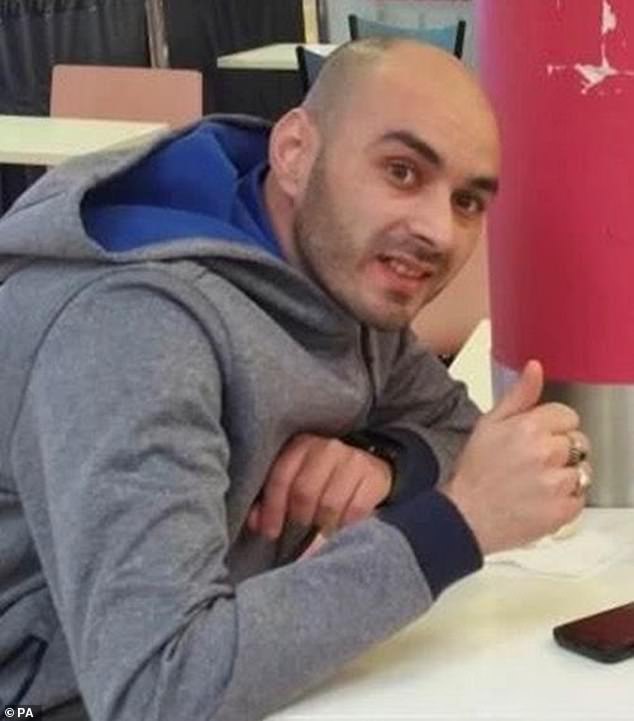 In an attack caught on brutal CCTV footage, Nathan Smith, 28, knifed Algerian Takieddine ‘Taki’ Boudhane (pictured), 30, twice in the chest during a confrontation in Finsbury Park, north London, on January 3 2020 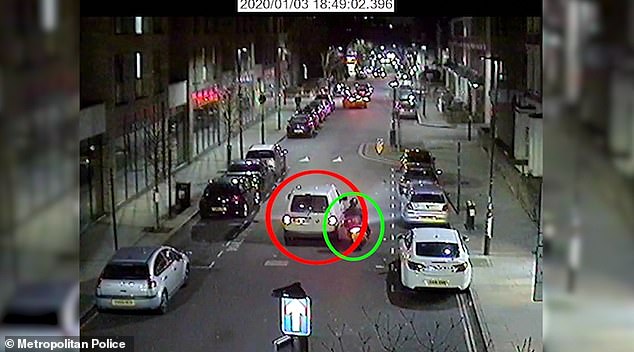 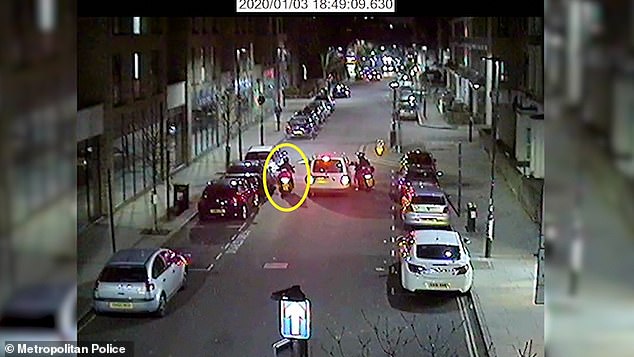 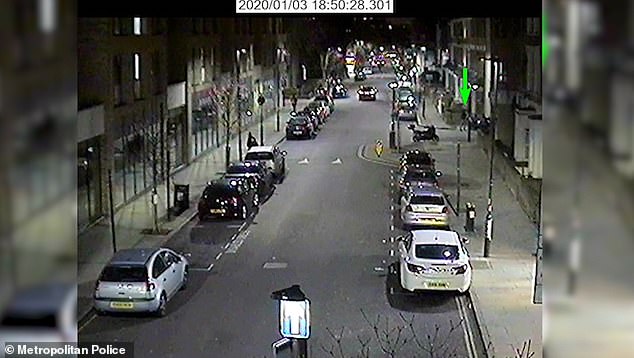 Mr Boudhane, a chef, had become upset at the manoeuvre and words were exchanged, prosecutor Julian Evans QC had told jurors

Smith was not working as a plumber of the night of the attack, and he had no lawful or legitimate reason to be carrying a knife.

The judge also said Smith had taken ‘positive steps’ to dispose of evidence in order to try to hide his involvement, before going on the run and fleeing abroad.

Mr Boudhane’s mother, Saide Bouhane, said the family’s lives had been ‘changed forever’ as Smith acted in ‘pure anger’ in response to a ‘minor road offence’.

The plan in the future had been for her hardworking-son to return to live with her in Algeria, but this will not happen and ‘he was not there to comfort me on the death of his father’, she said in her victim impact statement.

She added: ‘When the defendant acted in pure anger that night, he did not just kill my son, he killed my whole family. I hope that no family will have to go through this again.’

‘My son, brother, uncle and nephew Taki was taken from us and our lives will not be the same,’ said Mrs Boudhane.

‘Whilst my son was still lying in the street, this man had already started planning his escape from the country.

‘He would not accept responsibility for taking Taki’s life and as a result of this my family had to endure another 17 months of questioning how he was taken from us.’

Mr Boudhane’s mother asked: ‘Why was he taken from us? Who would do such a thing?’

The family were left ‘in limbo’ and endured ’17 months of not understanding what was happening and who was responsible’, she told the court.

She added that ‘this man continued to torment my family by refusing to accept responsibility’, and forced them to endure a jury trial where my son got to watch his brother’s murder ‘frame by frame’.

‘Not once did he say he was sorry for what he had done, only that he had suffered PTSD while he was on the run.’

Smith was in a white VW Caddy van when moped rider Mr Boudhane had made a right turn, before the fatal confrontation.

Mr Boudhane, a chef, had become upset at the manoeuvre and words were exchanged, prosecutor Julian Evans QC had told jurors.

The situation escalated as Smith emerged from his van in Charteris Road with a knife in hand.

Smith went ‘on the attack’ and Mr Boudhane used his crash helmet to ward him off.

Even when the incident appeared to end, Smith was ‘simply not prepared to let things rest there’, Mr Evans said.

Describing CCTV footage of the incident, the prosecutor said: ‘As Smith ran towards him, Takieddine swung his crash helmet towards Smith. This action, again say the prosecution, was defensive.

‘As Smith stepped on to the pavement, he ducked below the swinging crash helmet, and swung his knife twice, in quick succession, towards Takieddine’s upper body.

‘It is the prosecution’s case that one of those two rapid blows with the knife, each delivered with force, entered Takieddine’s chest.’

Despite suffering a 7.5cm wound, Mr Boudhane ran after Smith and hit the side of the van with his crash helmet as he drove off, the court heard.

Mr Boudhane then collapsed on the ground. Despite the efforts of medics at the scene, he died at 7.42pm.

Meanwhile, Smith drove home and said nothing to his family about what had happened, jurors were told.

The next day, he took a flight from Luton airport to Austria using his brother’s passport and bank card.

When police searched for him at his parents’ address, the defendant’s father showed them a video believed to be from his son featuring views of lakes and mountains. 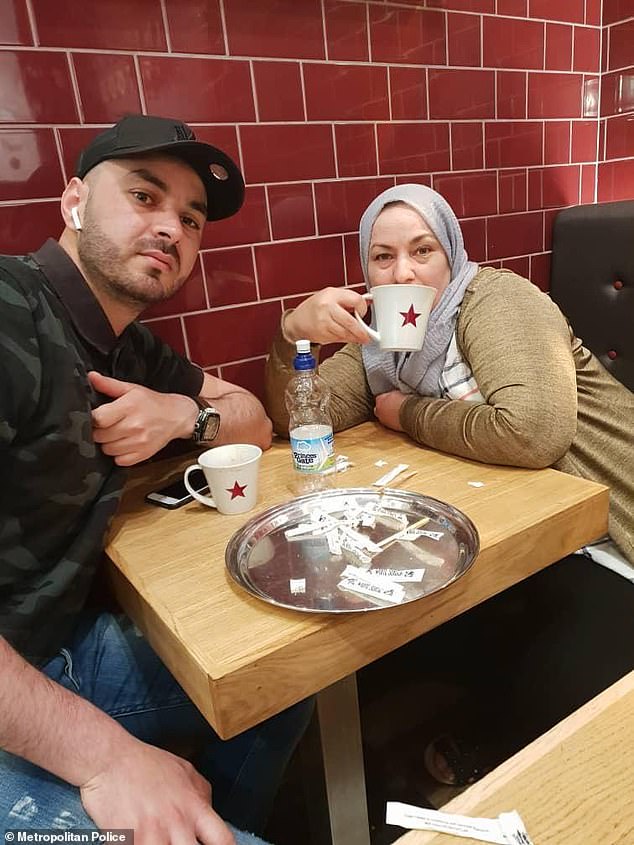 Mr Boudhane’s (left) mother, Saide, said the family’s lives had been ‘changed forever’ as Smith acted in ‘pure anger’ in response to a ‘minor road offence’

‘My son, brother, uncle and nephew Taki was taken from us and our lives will not be the same,’ said Mr Boudhane’s mother

In February 2020, an arrest warrant was issued for Smith, who returned to the UK after 17 months on the run in Europe.

On June 3 2021, he travelled back to the UK from Lisbon, accompanied by British officers.

During his trial, Smith, claimed he had acted ‘defensively’ after the victim produced a screwdriver.

He told jurors: ‘He swung for me, I swung back. I was not angry. I was scared at this point.’

The court heard that Smith, who has since expressed remorse over the killing, has previous convictions including possession of a prohibited weapon, offences of supplying class A drugs, possession of class A drugs with intent to supply and cannabis.

The Recorder of London, Judge Mark Lucraft, QC, said: ‘On 17 August 2022 you were convicted by the jury of the murder of Takieddine Boudhane.

‘The sentence I pass can never equate to or replace a life lost.

‘Another life lost to death through the use of a knife on the streets of London.’

The judge went on to say that Smith claimed he had been on his phone talking to a woman he was due to meet while driving the van that night.

‘It may be the case that you manoeuvred your van in a way that irritated Takieddine.

‘There is clearly a verbal altercation between the two of you.’

The judge said Mr Boudhane at one point turned his back to walk away.

‘You then ran at him.

‘You inflicted what was to be the fatal wound. On the CCTV you can be seen to use the knife and make contact with him on a couple of occasions. Having stabbed him you flee the scene in the van.

‘It is clear to me that you were the aggressor. While there was some posturing by Takieddine he does not approach or threaten you.

‘During the final sequence of events Takieddine was not holding the screwdriver in an open hand or brandishing it.

‘The next day you flee…using your brother’s bank card.

‘[You] remained at large for around 17 months.’