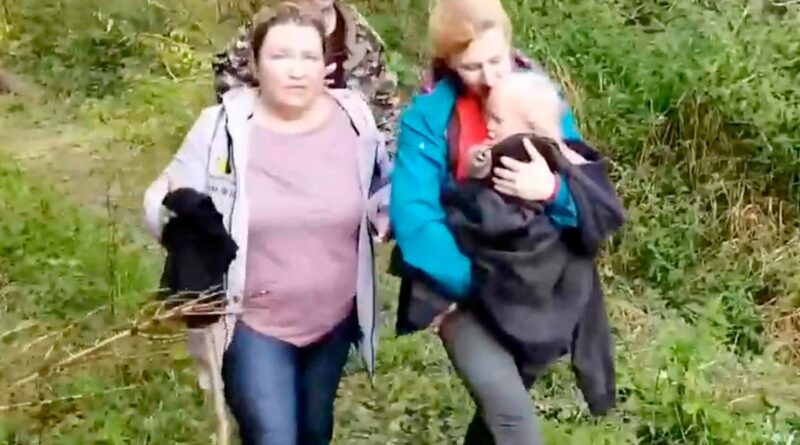 A miraculous video shows a toddler being found by sobbing rescuers after surviving in a forest full of bears and wolves for three nights.

Lyuda Kuzina, aged 22 months, was conscious after the ordeal and happily told rescuers: "I’m a princess."

She was found by one of 500 volunteers in Russia hunting for her near Obninsk even as hope was fading that she would be discovered alive.

A female rescuer from volunteer search squad Salvare clutches the girl moments after she was found in the new footage that emerged from the scene.

The woman tells fellow-searchers the heartwarming news: "She replies to our questions. She tells us fairytales. She is a princess."

In the clip, the emotional rescuer holds Lyuda and warms up the tot, who endured three nights when temperatures dropped to as low as 10C.

She tells Lyuda: "Warm up my sweet, warm up. Everything is good. All is perfect.

Lyuda, daughter of a nuclear physicist, had gone missing from her garden when her mother Antonina, a radiologist, briefly went to chat with a neighbour.

"There was such despair when she was lost," said her mother.

"So many people were looking and not finding her, we thought maybe she had been knocked by a car or kidnapped.

"After three nights in the forest, of course, we already thought that at best we will find her unconscious.

"On the second night there was a heavy shower, and the third night was cold …

"I don’t know how she held out for so long."

For three days rescuers searched for her, then a group who were resting heard "a faint squeak".

“Lyuda immediately stretched out her thin arms and snuggled tightly to her rescuers," said a spokesman for Salvare.

“Everyone cried – experienced and first-time volunteers, local residents, everyone was sobbing."

Wearing only a T-shirt and knickers, she was weak, and bitten by ticks and insects, and stung by nettles.

Her feet were hurting from barefoot walking as she tried to find her way home, but ended up deeper in a forest populated with bears and wolves.

Her mother said Lyuda is doing well in the hospital where she was taken after being found on Saturday (August 21).

"So far, she can’t walk because of sore feet but it’s getting better now,” said Antonina.

She is out of intensive care and in a normal ward.

Veteran rescuer Pavel Baranovsky said: "An adult in such a situation begins to panic, break through bushes, run somewhere.

"But a child might take it as an adventure. She slept at times, and stored the resources of her body.

"And the 'reserves' of a person are large. You can go without food for a long time."

She drank water from streams and it seemed as though "for Lyuda, wandering through the woods was not a lot of stress".

He added: "She did not perceive it as something terrible, except maybe at night.

"Hypothermia could end badly. There were moments when we thought that the girl was definitely frozen."