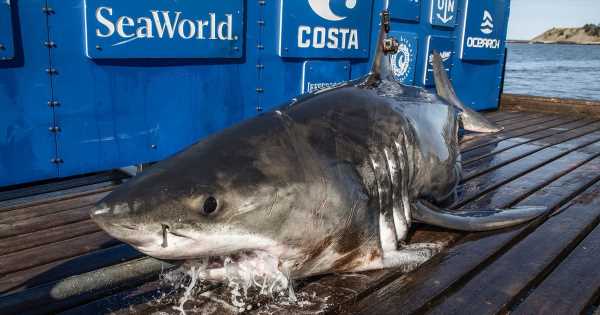 A monster 13ft-long great white shark called Bob has been detected lurking in the ocean close to a tourist beauty spot.

OCEARCH, a non-profit organisation that tracks the world's biggest sharks, pinged beastly Bob on Sunday (October 23) at the mouth of Chesapeake Bay, which reaches into both Virginia and Maryland in the US.

The organisation tracked his journey down America's east coast, with a recording near New Jersey on October 21 and another off Cape Cod in Massachusetts on September 22.

READ MORE: Gruesome shark attack saw man's arm ripped in half after pulling it out of beast's jaws

OCEARCH shared a photo of Bob on Twitter on Monday (October 24). They wrote: "Mature male white shark Bob has moved further south off Virginia Beach! When we studied Bob last year off Nova Scotia he was approximately 1,308lbs & over 13ft long."

Chesapeake Bay is a scenic tourist location boasting a number of historical landmarks, fishing spots and water sports centres. It is also the largest estuary in the US.

Great whites such as Bob tend to migrate down the American east coast in the winter months to warmer waters around Florida, following their food.

In the winter they will swim all the way up to Nova Scotia in Canada.

Gavin Naylor, director of the Florida Program for Shark Research at the University of Florida, told Newsweek: "We often see white sharks move down from Canadian waters to Florida. However, this is not a 'hard and fast' rule.

"White sharks are quite large and, as a result, have considerable thermal inertia. This means they don't 'warm up' or 'cool down' as much as would smaller animals, so temperature per se is less of a driver of movement than is food availability.

"If you look at multiple white shark tracks in the Northwest Atlantic, you will see that they are all over the place."