Hours before he was shot Aaron ‘Jay’ Danielson and a friend were protecting a flag-waving caravan of Trump supporters. 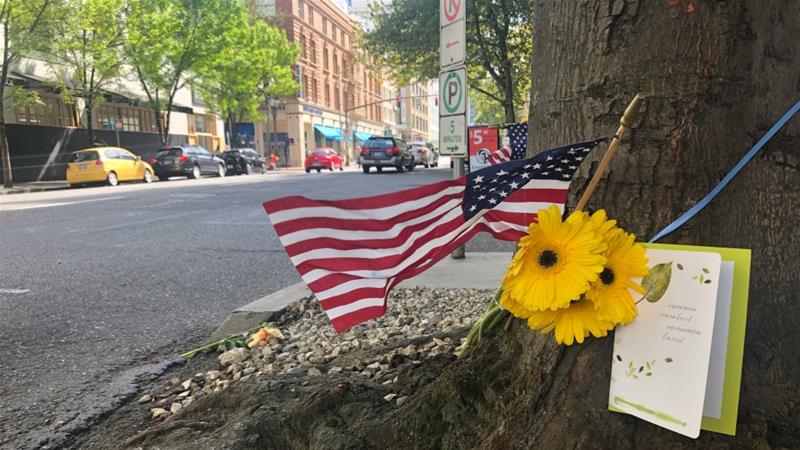 Protests flared again in Portland overnight on Monday as demonstrators clashed with police on the streets of the city which after months of sometimes violent confrontations has become a focal point of the US presidential race.

Police used smoke grenades and pepper balls to control the crowd of protesters. Police acknowledged in a statement that officers “deployed some crowd control munitions” and said 19 people were arrested, mostly on charges of disorderly conduct and interfering with police.

About 200-300 people gathered in the downtown area to march to the apartment of Portland Mayor Ted Wheeler to demand his resignation. They were seen setting fire to wooden benches and plastic rubbish bins along the march.

Police declared the gathering unlawful and later upgraded it to a riot after protesters set fire in an apartment building. The area was secured to allow firefighters to respond to the situation, police said.

Portland has seen nightly protests since the killing of George Floyd, a 46-year-old Black man, in Minneapolis on May 25. Hundreds of demonstrators have been arrested since the protests began.

In recent weeks, tensions between right- and left-wing groups in the city have roiled downtown. 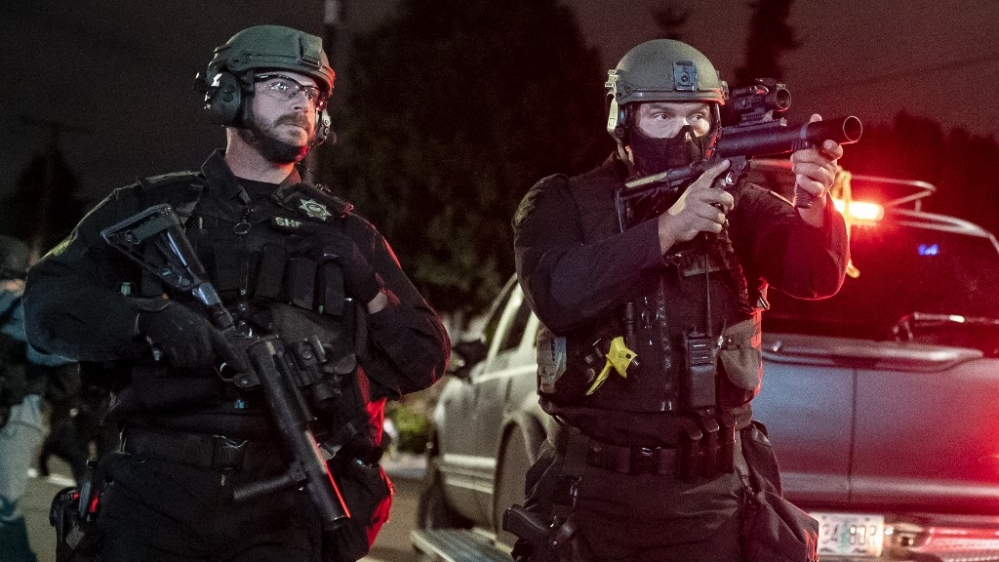 A supporter of a right-wing group who was shot dead on Saturday night was mourned by both friends and President Donald Trump as a victim of mob violence while an online fundraising effort raised tens of thousands of dollars in his memory.

Just hours before he was shot in the chest, 39-year-old Aaron “Jay” Danielson and a friend were seen heading downtown to protect a flag-waving caravan of Trump supporters. They wore hats with the insignia of Patriot Prayer, a group that has clashed with left-wing protesters in Portland for years, and appeared armed with knives and paintball guns.

“Paint is a defensive mechanism. Paint is not bullets,” Trump said during his White House briefing on Monday, adding that someone connected with violent protests “shot a young gentleman and killed him. Not with paint but with a bullet.”

In mobile phone video of the shooting, both Danielson and his assailant were seen on a darkened street. At least three shots rang out in a smoky haze, followed by images of Danielson crumpled on the ground as the friend, Chandler Pappas, slaps him in the face and rolls him over, yelling “Jay! Jay!”

“He was a good man and he was just killed senselessly for no reason other than he believed something different than they do,” Pappas told supporters during a rally Sunday. “He was Christian. He was conservative.”

Added Patriot Prayer founder Joey Gibson on his Facebook page: “We love Jay and he had such a huge heart. God bless him and the life he lived.”

I am getting a lot of questions so I thought I would make this post. 1st- We love Jay and he had such a huge heart. …

Ex-girlfriend Christine Banks said Monday Danielson did not discuss politics much but of the weeks-long protests in Portland: “He didn’t think it was right. … He was there for peace.”

Banks said Danielson was a good person who loved nature and animals.

“If you ask anybody, the one thing they’ll remember him by is his goofy, beautiful smile,” she said. “He cared about what you believed in and not the colour of your skin.”

A GoFundMe site late Monday said it had raised $33,000 from more than 900 donors for “legal/lawyer fees, and towards fulfilling all other incurred costs in this time of need”.

Danielson, a burly, bearded man, helped run a company in Portland called North West Specialty Moving that focused on transporting heavy items such as marble statues, hot tubs and gun safes. The company’s address, which is the same address listed for Danielson for two parking violations in 2019, is a modest blue bungalow in a residential neighbourhood in southwest Portland. 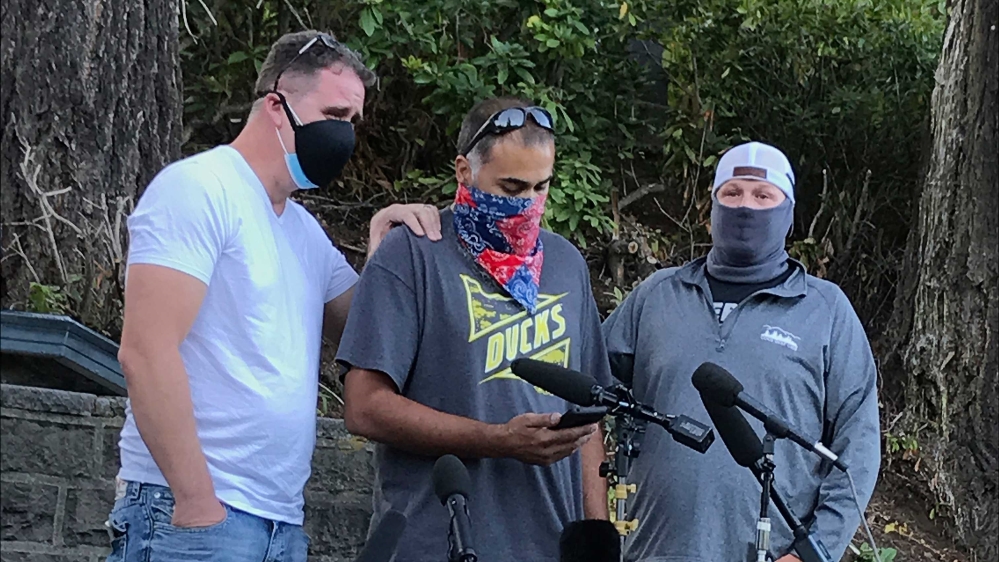 Luke Carrillo, Danielson’s longtime business partner, said they had been friends for 20 years.

“We have lived and worked together day in and day out,” he told reporters. “We are like brothers, brothers that chose one another.”

Danielson is associated with another company, Oregon Pro Arms LLC, which according to state records is focused primarily on moving gun safes.

Just hours before the shooting on Saturday, Pappas stood in a mall car park in suburban Clackamas talking to a reporter from the Portland Tribune.

The man next to him who appeared to be Danielson did not say much, except to make a reference to a journalist who had been attacked last year in Portland.

“We’re all about independent journalism,” the man said.

Pappas at one point interjected, referring to the Trump caravan, “I’m here to stop people from assaulting these people.”

Critics have said that instead of keeping the peace, Patriot Prayer has helped incite violence. Last month in nearby Gresham, Pappas showed up to counter a Black Lives Matter event and, according to the Portland Tribune, declared: “I came here ready for war.”

Portland police have yet to make an arrest. On Monday, they asked for witnesses and those who had taken video of the scene to contact them.

A small memorial to Danielson took shape Monday on a sidewalk in front of the parking structure where he collapsed. It included four yellow daises tied to a tree, a small American flag flapping in the wind, and a sympathy card with a Bible verse and handwritten note.

“Jay went to Jesus, where will you go?”