Was England’s second lockdown really needed? ONS revise figure for daily cases in mid-October to show Covid was NOT spiralling as quickly as feared

More questions were raised about the data used to send England into its second lockdown in November today after it emerged that official Covid-19 estimates were dramatically revised.

In its October 30 report, the Office for National Statistics estimated that 9.52 people per 10,000 in England were catching the virus every day by October 17 – up from 4 per 10,000 at the start of that month.

This was significant because it signalled infections were more than doubling every week and approaching levels seen during the darkest days of the first wave in spring.

However, in its most recent report on December 4, the October estimate had been retrospectively changed to 4.89 per 10,000 – half its original prediction.

Boris Johnson announced the controversial autumn shutdown at the end of October in the face of a growing body of research claiming Covid-19 cases were spiralling.

Results from the ONS’ weekly survey, considered one of the most accurate Covid-19 surveillance studies in the UK, is likely to have been one of the driving factors that swung No10 in favour of the crude intervention.

A separate controversial model, by a team at Cambridge University, forecast up to 4,000 deaths a day by the end of November. That model was also toned down dramatically weeks later.

A spokesman for the Government-run data collecting body claimed it stands by the estimates it used to advise the Government in late October. They added that as it collects more data its modelling is always subject to revision. 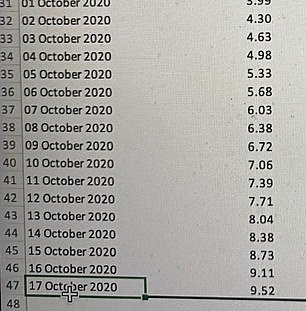 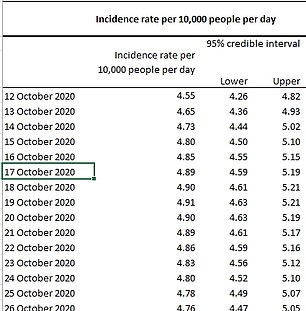 On October 30, the ONS estimated that 9.52 people per 10,000 in England were catching the virus every day by October 17. In its most recent report on December 4, the body halved its estimate to 4.89 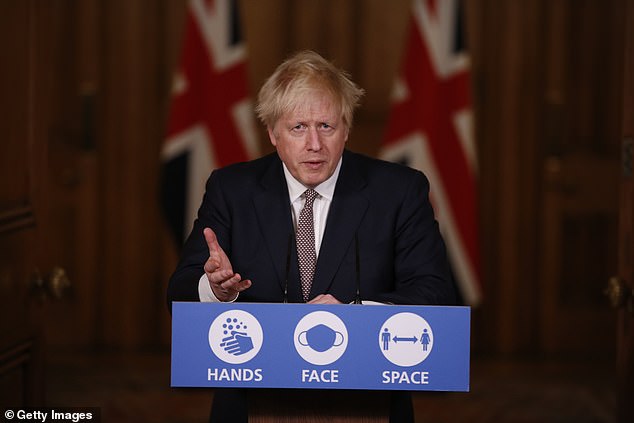 The revision of the figures was spotted by ITV’s Robert Peston on Twitter today, who said: ‘It is hard to make momentous decisions like whether to go into national lockdown in a rational way if the data informing those decisions is subject to such massive after-the-event revisions.’

A spokesperson for the ONS said: ‘Our official estimates of infections are the best estimates based on the data collected over the past eight weeks at date of publication.

‘We publish the full back-series of modelled estimates for transparency and these should not be considered ‘revised official estimates’.

‘We have always advised people to use our official estimates as originally published as these are unaffected by the effects of policy changes that took place after publication.’

Officials have previously been criticised for using doom-mongering graphs and not giving the localised tiered system enough time to take effect.

Number 10 cherry-picked ‘spurious’ coronavirus data to justify England’s second lockdown and may have intended to frightened the public, according to one of Britain’s top experts.

Eminent statistician Sir David Spiegelhalter suggested ministers had eroded public trust by choosing only to show worst-case scenarios, which were often based on out of date data.

The Cambridge professor told MPs: ‘I don’t want to ascribe motivation to anyone of course. But if someone was really trying to manipulate the audience and frighten them and persuade them that what was being done was correct, rather than genuinely inform them, then this is the kind of thing they might do.’

Doom-mongering graphs which predicted 50,000 cases by mid-October and 4,000 deaths a day by late November were used by Downing Street to justify England’s second lockdown.

Those fantastical charts were widely ridiculed because the country was recording 14,000 daily infections in October and daily deaths currently average around 450.

Speaking at a House of Commons select committee, Professor Spiegelhalter added: ‘Those projections were made by one team early in October under certain very pessimistic assumptions.

‘They’d already been revised twice by the time they were shown to the public so it was completely inappropriate to present them to the public.

‘I’m not saying the judgment [to decide to go into lockdown] was wrong, I’m not making any comment about that.

‘What I’m objecting to strongly is the fact such spurious data and graphs were being presented to the public as a justification for the decisions that were being made.

‘You didn’t need that graph, you just needed quite short-term projections to tell something needed to be done or we could be in real trouble very quickly.

‘There is good data available and yet at some point the need to persuade people, to instill a certain emotional reaction in people seems to take over at really quite a high level of decision making. I think it’s quite unfortunate.’

He suggested ministers had eroded public trust by choosing only to make pubic the worst-case scenarios, which were often based on out of date data.

He told MPs today: ‘I don’t want to ascribe motivation to anyone of course. But if someone was really trying to manipulate the audience and frighten them and persuade them that what was being done was correct, rather than genuinely inform them, then this is the kind of thing they might do.’

Tory ministers have compared frightening data presented to the public to the controversial dossier on weapons of mass destruction that sent Britain to war with Iraq.

Charts which predicted 50,000 cases by mid-October and 4,000 deaths a day by late November were wheeled out by Downing Street to show the public why a lockdown was necessary.

But those fantastical charts were widely ridiculed because the country never recorded more than half of those daily infections in October and daily deaths currently average 427.

The MRC Biostatistics Unit COVID-19 Working Group at Cambridge came under fire for the 50,000 cases and 4,000 deaths a day figures.

The team has since revised its estimates and now says that cases started falling in October thanks to ‘a combination of the social restrictions introduced in October, the temporary decrease in activity over the half-term period, and the lockdown.’

It comes as weekly Covid deaths in England dropped for the first time since September during the country’s last full week of lockdown, ONS’s statistics show.

Today’s report showed Covid was mentioned on 2,713 death certificates in England and Wales in the seven-day spell between November 21 and 27, which was down from 2,808 a week earlier.

The three per cent drop, shown in the count by the actual date of death as opposed to registration, was the first time in 12 weeks that the number of people dying had fallen in England and Wales. Most of the fatalities were in England.

Death numbers tend to spike around three weeks after infections do because of the time it takes for victims to become seriously ill and then die.

So a peak in deaths almost three weeks into the national lockdown – in the week up to November 20 – shows that the outbreak was at its largest and most rampant at the start of November, just before the shutdown started. Scientists at the time estimated that between 50,000 and 100,000 people were getting infected each day.

And it suggests lockdown worked, bringing infections under control around a month ago which is now translating into fewer people going into hospital and dying.

The ONS report also shows that coronavirus is now accounting for one in every four deaths in England and Wales, while fewer people than normal are dying of other causes.

Total deaths are above average in all places, however, pushed up by Covid deaths, and over 35,000 more people than usual have died in private homes this year as many have avoided or been unable to get life-saving medical care.

Excess deaths appear to be declining now too, however, and there were 2,099 more deaths than average registered in the week to November 27, compared to 2,155 the week before.

Registered deaths, which are counted by when a person’s death is officially noted, not the day it happens, were the highest in six months for coronavirus in the most recent week, at 3,040, more than any week since May 15. These records, however, include some deaths that actually happened in earlier weeks.