A mother-of-one who burst into another woman’s home and then battered, strangled and stabbed her in front of the victim’s grandchild was jailed for 11 years today.

Shereena Oghani, 28, targeted 56-year old stranger Shukri Wando at complete random after loitering around her neighbourhood apparently looking for a home to rob.

The sentencing judge described the frenzied attack as the ‘stuff of nightmares’ and branded Oghani as a ‘significant risk to the public’ before jailing her.

Mrs Wando answered a knock at her front door only to be confronted by Oghani who then stabbed her with such force one of the two knives she grabbed during the assault, bent under the ferocity of the blows. 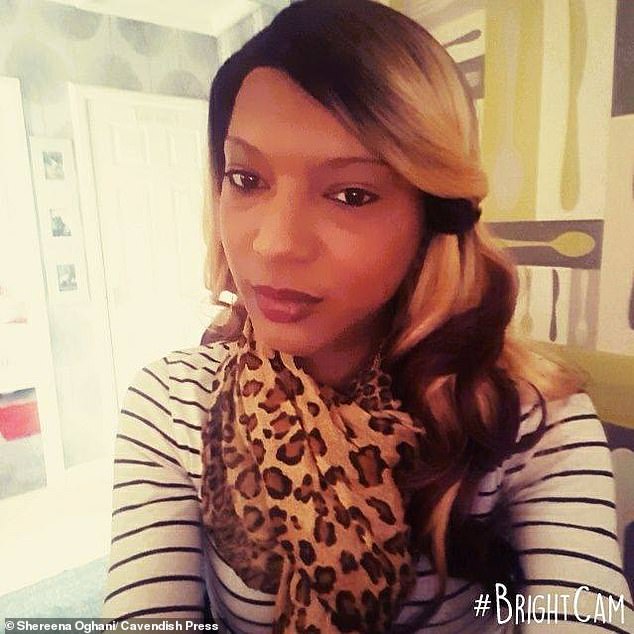 Shereena Oghana, a mother-of-one, has been jailed for 11 years after attacking a grandmother in her home during a vicious robbery the sentencing judge called ‘the stuff of nightmares’

As the victim was being attacked, her 18-month grandson bravely tried to intervene but was bundled aside by the attacker.

Oghani eventually fled with Mrs Wando’s laptop before being seen washing blood from her hands in a puddle outside.

Mrs Wando who lives in Moss Side, Manchester, was left for dead following the attack but despite suffering multiple slash and stab wounds to her face, back and scalp, made a miraculous recovery.

At Manchester Crown Court, Oghani of Stretford faced a charge of attempted murder but prosecutors accepted her guilty plea to the lesser charge of wounding with intent to cause grievous bodily harm. She also admitted robbery and assault.

Det Con Mike Baylay, of Greater Manchester Police, said: ‘This was a vicious and vile attack which saw the victim, quite frankly, left for dead and caused great distress for the woman’s young grandchild who was also targeted during this random act of savagery. 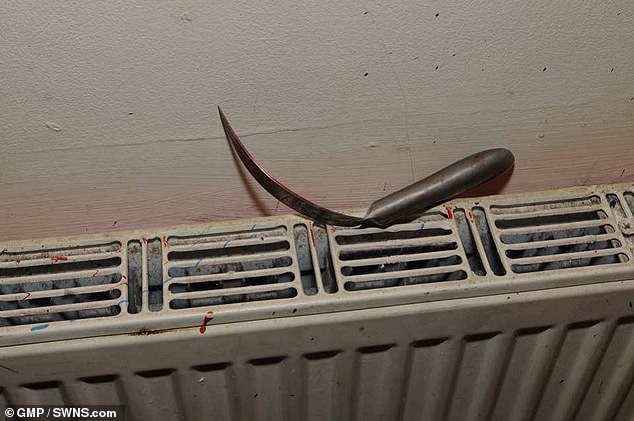 During a violent armed robbery, Shereena Oghani used such force that one of the two knives she used to stab Mrs Wando bent out of shape. She also used a chair and a laptop as weapons

‘While today’s verdict is a welcome result, it will do very little to heal the emotional and physical consequences that Oghani’s victim has suffered, and I hope that Oghani will find it within herself to portray any ounce of remorse while she sits behind bars.

‘Aside from the brutality of the use of weapons, Oghani’s attempt to strangle the victim using a scarf showed a complete disregard for the woman’s life; the randomness and viciousness of Oghani’s actions mean the streets are much safer without her.’

The incident occurred at 4pm on November 13 last year after Mrs Wando’s daughter had taken her other children to the dentist leaving the victim at home with her youngest grandchild.

Oghani, who had been under the influence of drugs, was seen pacing up and down the street for around 30 minutes before knocking at Mrs Wando’s front door. 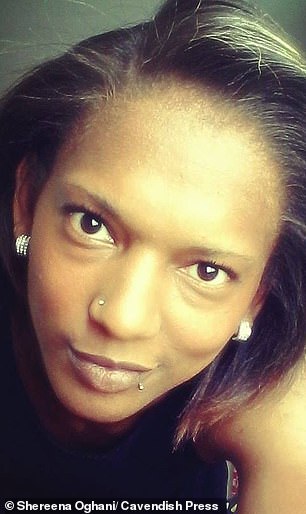 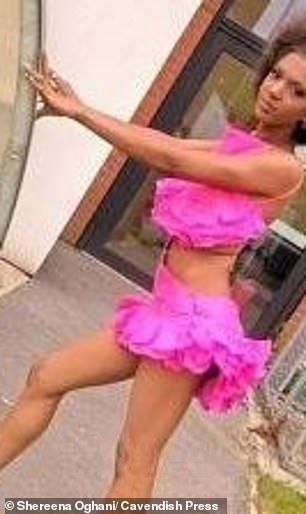 Mark Kellet prosecuting said: ‘Mrs Wando answered the knock at the door only to be confronted by the defendant who pushed her back into the hallway before locking the door behind her. There was no explanation for why the victim was targeted.

‘The defendant punched her to the head three times and then grabbed the victim by the hand and dragged her to the kitchen. She located a knife then slashed Mrs Wando about the body as the victim struggled to get free.

‘She was holding Mrs Wando with one hand whilst stabbing her with the other. That part of the attack lasted almost 20 minutes.

‘The defendant was also biting Mrs Wando and ended up in possession of two knives. 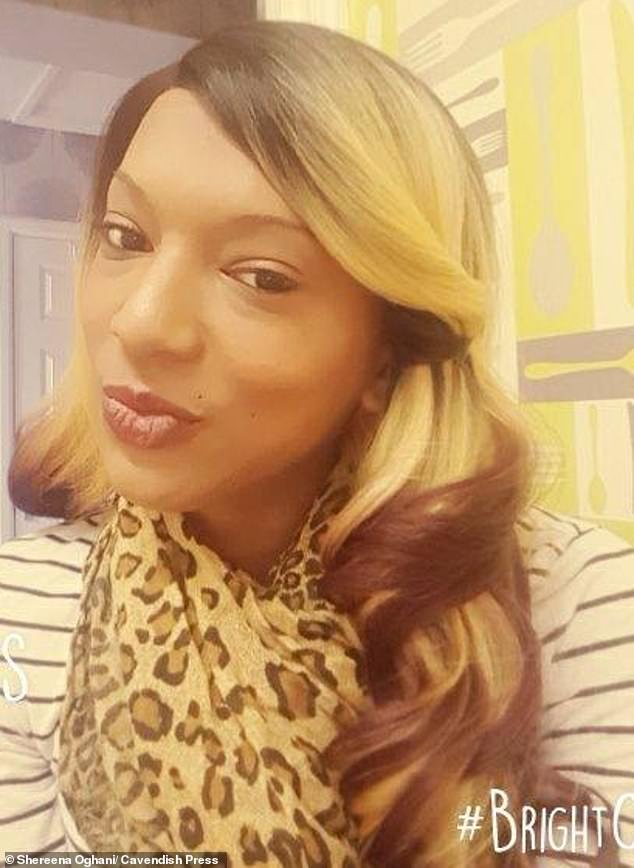 After the attack, Oghani was found by police five days later in London. She was arrested following a bust up in a supermarket.

‘She also strangled Mrs Wando, all the time shouting and screaming in a language the victim didn’t understand.

‘She then dragged Mrs Wando to the sitting room and continued hitting her. She picked up a laptop and struck her to the face with it. She also hit her with a chair and Mrs Wando lost consciousness.

‘It was impossible to say how many times she was struck. She was stabbed to the back of head whilst on the floor. Mrs Wando came round but the defendant broke a chair over her before stamping on her head. 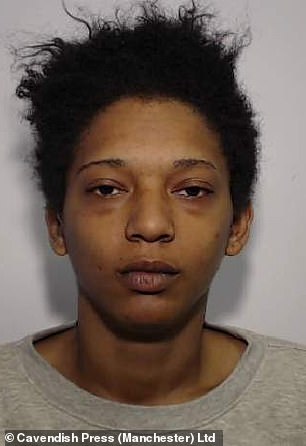 Shereena Oghani has been jailed for 11 years for wounding with intent, robbery and assault after attacking a grandmother in her own home in front of the victim’s 18-month old grandson

‘The violence was witnessed by her grandson and he was running around the room trying to help his grandmother. He was obviously distressed and frightened by what happened and as he did so was pushed and kicked out of the way.’

Oghani left the property and Mrs Wando herself made the call to the police despite her wounds.

In a statement the victim, who was born in Somalia, said: ‘I still suffer pain from the injuries and I live in fear and no longer feel safe in my house. It had also had an impact on my grandson who had to witness the attack.’

Oghani went on the run but was arrested five days later 250 miles away in London following a bust up at a supermarket.

When told what it was about she replied: ‘You’re joking.’

She has a history of mental illness and of going missing and has 17 previous offences in her record including convictions for violence against police.

Just a month before the robbery she had been given a suspended prison term for a house burglary.

In mitigation her lawyer Dan Gaskell said her client had been exploited by others and added: ‘Prior to the attack she had been give some blue pills and can remember little after that.

‘She was taken away from the area by an individual who had a controlling influence on her.’

But sentencing Judge Alan Conrad QC told Oghani: ‘You launched a savage and sustained attack in Mrs Wando repeatedly punching her and stabbing her with two knives one of which bent in the attack and using other items as weapons.

‘You also tried to strangle your victim and caused her serious physical and emotional injury, the psychological effects of which will endure. A small child was struck during your frenzied violence.

‘Such an attack is the stuff of nightmares for any householder and the shock extended to the mother of the little the boy present who was out with her other children at the time.

‘I am satisfied you present a significant risk to the public of causing serious harm.’

Oghani will serve at least two thirds of her sentence and following her release will be on licence until 2035 under the the terms of an extended sentence.