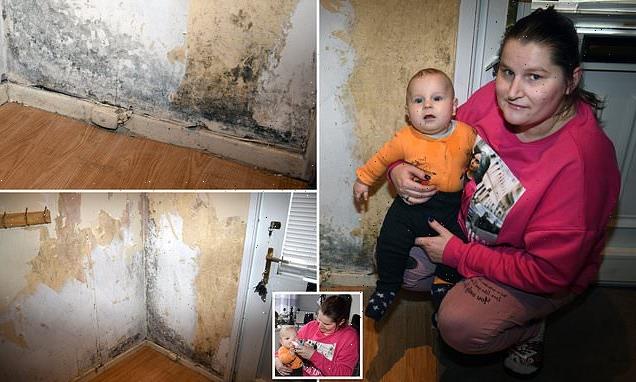 Mother says mould in her home has left each of her three children aged nine, six and six months needing inhalers – and their health is getting ‘worse and worse’

A mother-of-three has said that black mould in her home has caused her three young children to suffer with breathing problems.

Marzena Piatkowska has lived on Merlin Road, Scunthorpe, for three years, and noticed patches of black mould appearing on her walls in October last year.

She said her three children, aged nine, six and six months, suffer with breathing problems, persistent coughs and skin problems, which she believes is caused by the mould.

They have been prescribed steroid inhalers by their GP and Ms Piatkowska said she also suffers with a constant tightness in her chest. 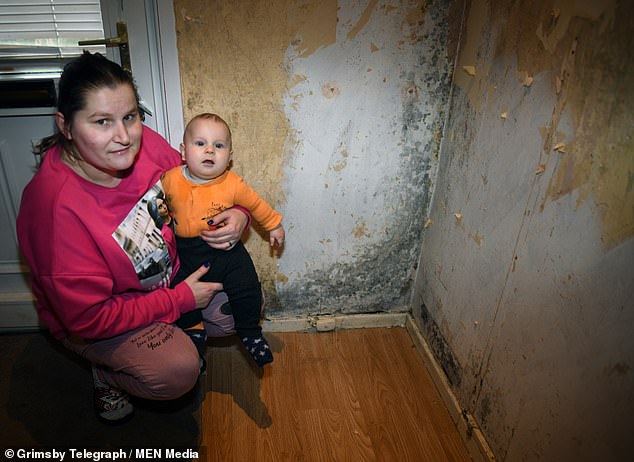 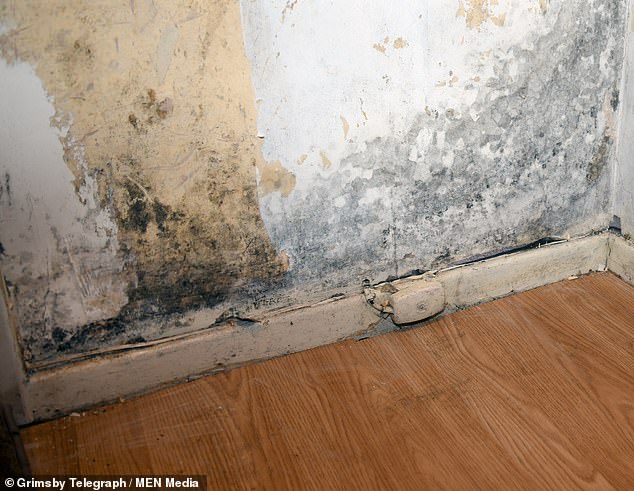 She said: ‘It’s affecting my mental health because my kids are telling me they don’t want to live there.

‘My six-year-old daughter is asking if we can move out because there’s so much damp. They don’t want to live there.

‘I’m very upset, I’m so emotional and I can’t do anything to help them. I’ve got chest pain and a tightness in my chest,’ she told Scunthorpe Live.

Speaking about the beginning of the problems, Ms Piatkowska said: ‘We started having problems with the roof leaking two years ago which I reported to the landlady.

‘Last year in October we started having mould appearing everywhere and so we reported that, and [the landlady] sent a guy to have a look at the problem, but he was only a painter.

‘She only requested that he painted over the mould, but he said no and left the property. 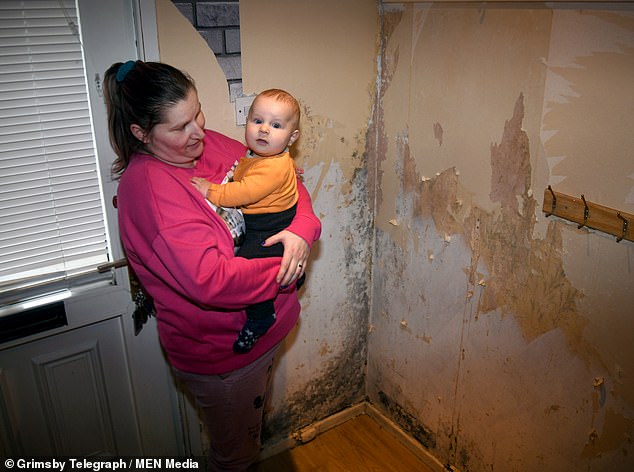 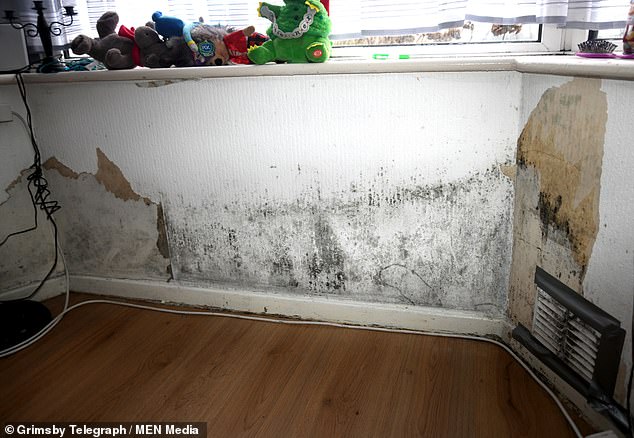 ‘I asked her again for someone to come to sort the roof repair because I believe the mould in the bedroom is because of the roof problem, and she was waiting a long time to sort that.

‘Finally she found someone to repair that, but we’ve still got a lot of mould upstairs and downstairs.’

Her landlady claimed the problem is caused by a lack of ventilation and that an inspection she ordered reached the same conclusion.

Ms Piatkowska’s said that cleaning the mould and using a dehumidifier has made no difference and that the family are always cold because of the walls being wet.

She said: ‘I tried cleaning the mould and have used a dehumidifier.

‘We feel cold all the time because all the walls are wet, and we put the heating on but the house is still cold, it doesn’t matter how long we have the heating on, it’s always cold.

‘We’ve tried to dry the walls but my children are getting worse and worse.’

Ms Piatkowska said that on January 9, her landlady visited her home with a man who conducted a damp survey on the property – but that the subsequent report on the situation said the issue with mould was her fault.

Another mother has said that her council is ‘waiting for us to die’ as her flat is covered in mould that has even made its way into her daughter’s shoes. 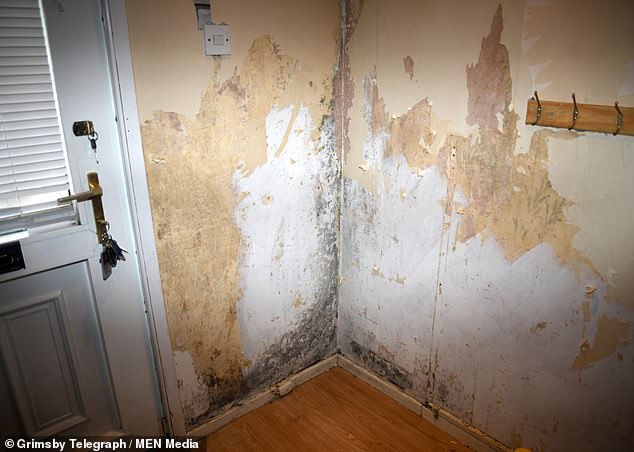 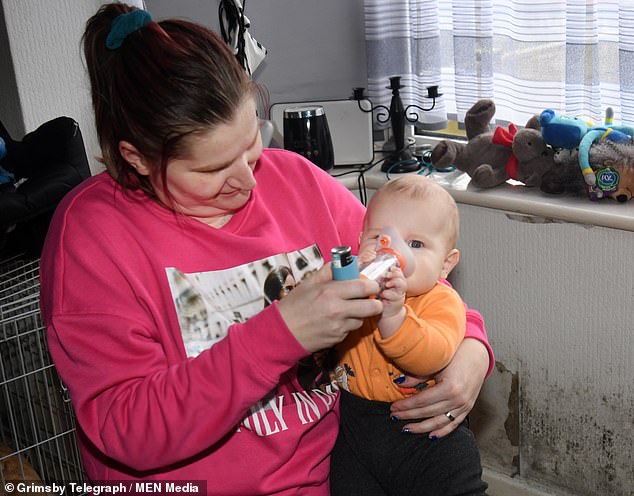 She said: ‘The landlady came with one guy on Monday to inspect the wall but she didn’t see the problem because she just sat on my sofa and didn’t check the house. She hasn’t even seen the problem.

‘His report said it was my fault. How can it be my fault?

‘I’ve tried to talk to the landlady in a friendly way, I just need help, but she’s not interested. She said if the kids have a problem with the mould, to just move out.

‘But I have two dogs and can’t find another private landlord, so I’m waiting for my application for a council house to be opened.’

Marzena’s landlady then blamed the mould on a lack of ventilation throughout the property. She said: ‘The tenant was informed at the beginning of her tenancy that she needs to ventilate rooms to avoid damp.’

The damp survey said: ‘The damp is condensation damp. With improved building features in the house, such as wall insulation, double glazing and draught proofing, ‘natural ventilation’ is prohibited.

‘Stale air is trapped causing streaming windows and walls, which ultimately leads to musty smells, dampness and mould growth. The humidity levels were high in the property, ranging from 75% to 77% respectively.

‘The humidity levels could be higher than this during the night time and into morning when all the windows are closed. We generate about 25 pints of moisture a week each by these normal lifestyle practices. Without good care of the property on the tenants’ behalf and ventilation the damp will rise only.’

Another mother has been forced to sleep on her living room sofa with her young children because their bedrooms are so infested with mould and their carpets are wet with water.

Two-year-old Awaab Ishak died in December 2020 due to the mould in his flat.