Not cool! Passenger risks injury by hanging out a window to escape the heat as car drives along the MOTORWAY

This is the moment a passenger on the M20 takes a risky approach to keeping cool on a scorching Bank Holiday.

As he rode in the passenger seat along the motorway in Kent one man decided to climb out of the window and perch himself on the ledge.

Liam Ryan, who spotted the risky method of travel, wrote on Twitter: ‘Just wanted to check that this isn’t considered normal behaviour while driving down a motorway?’

One picture shows the man, wearing a white T-shirt and sunglasses, casually hanging out of the window of the blue Audi. 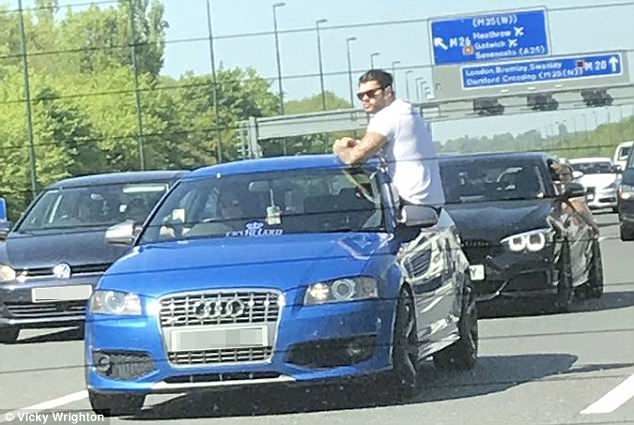 One picture shows the man, wearing a white T-shirt and sunglasses, casually hanging out of the window of the blue Audi on a scorching Bank Holiday Monday

The man rests his hands on the roof and does not seem concerned by the danger.

A video clip shows him travelling alongside a lorry as traffic speeds ahead on the motorway.

The Twitter account Kent 999s said: It may keep you cool in the heat, but this chap spotted on the M20 this morning is unlikely to walk away uninjured if there was a crash.

It comes as UK temperatures are expected to reach 82F (28C), making it the hottest May Bank Holiday Monday since it was introduced in 1978.

The Met Office announced shortly before 11am that the new record had been set, when thermometers clocked 75F (24.2C) in Herstmonceux.

The previous record for the May Bank Holiday Monday was 74.5F (23C), set in 1999 in Hampshire and Worcestershire. 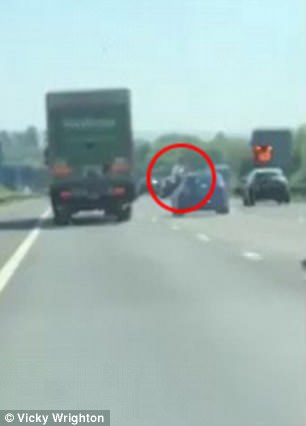 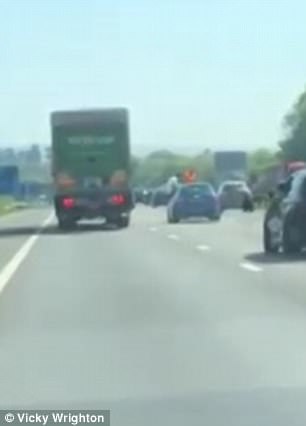