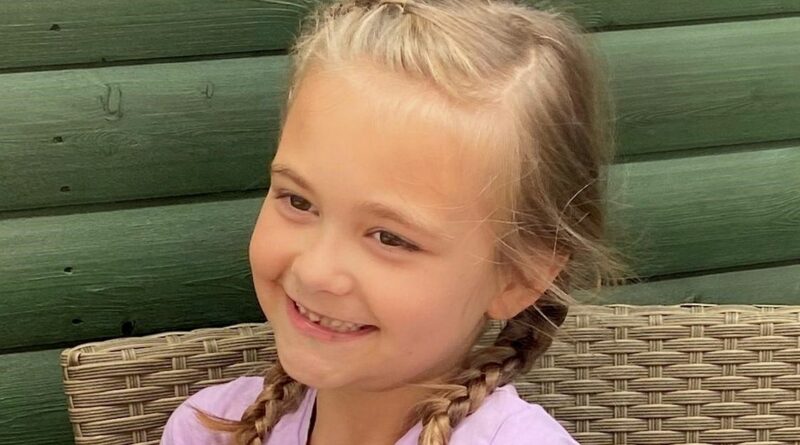 The heartbroken family of a little girl who was tragically hit by a car in front of her dad have paid an emotional tribute to their little girl.

Shartlotte Naglis, six, was walking along the road with her dad on Saturday night when they were struck by a car in Norton Green, Stoke-on-Trent, Staffordshire.

Desperate efforts of passersby was not enough to save the young girl, who was pronounced dead at the scene just hours before Father's Day on Endon Road at 7.15pm.

In a heart-wrenching tribute to Sharlotte, her family said: "Sharlotte was so beautiful, full of life, always smiling, sassy, so brave and happy.

“Sharlotte had just started her gymnastics classes which she loved and was shining so bright in.

“She was loved by everyone that met her, so caring and loving.

“Every night since she was born she would never sleep without holding her mum’s hand.

“There will never be another child like her for anyone who met her.

"She was taken so early from us and will never be forgotten.”

A man who said he was the girl's father was reportedly seen this morning visiting the scene where Sharlotte was killed and paid tribute to her, saying she was "the loveliest little girl ever."

The devastated man, in his 30s, who allegedly didn't want to be named – was seen uncontrollably sobbing while accompanied by two friends at the scene.

Speaking to The Scottish Sun for a brief moment at the site, the dad said: “She was the most loveliest little girl ever.

“I can’t say anything else right now it’s too hard.”

The group who spent around two minutes at the scene of the crash stood and looked at bunches of flowers placed in tribute of his little girl by the side of a wall.

Residents attended the scene to pay their respects for the young local girl – placing flowers next to a wall at the side of the road.

Police are still appealing for witnesses of the crash.

Sergeant Rich Moors, of the Staffordshire and West Midlands Serious Collision Investigations Unit, is urging any witnesses to come forward.

“We’re continuing to investigate and understand fully what happened last night," he said.

"We’d urge anyone with CCTV or dashcam footage, or who witnessed the collision or saw a blue Skoda in the area to get in touch with us."

Sergeant Moors added: “Again, we’d kindly urge people not to speculate as to the circumstances.

“Sharlotte’s family are being supported by specially trained officers. Our thoughts are with them all at this time.”