M&S stores in France have started running out of food as the supermarket giant becomes the latest company affected by Brexit border hold-ups.

Images circulated on Twitter showed the supermarket shelves at M&S outlets in Paris and Lille standing empty, with no clear indication of when they would be restocked.

An M&S spokesperson confirmed the lack of groceries is a result of ‘Brexit teething problems’ that are affecting supply chains.

The spokesperson added that the post-Brexit border delays are affecting large and small businesses alike, making it challenging for British exports to reach Europe. 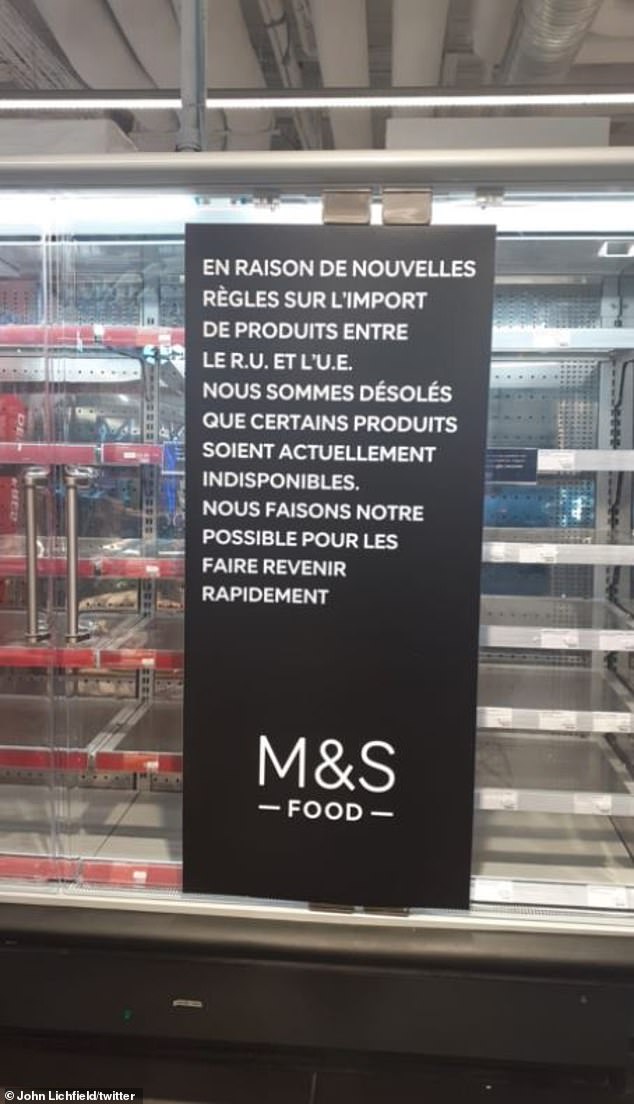 Images have emerged of M&S stores in France with the shelves half-empty. The sign says: ‘Due to new rules on importing products between UK and EU we are sorry that some products are currently unavailable. We will do our best to get them back quickly’ 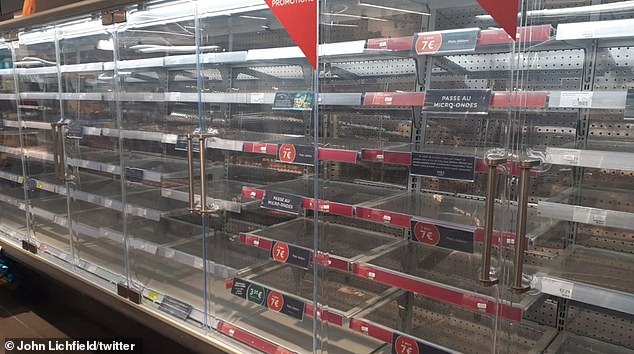 The photos, which were taken at a store in Paris and then circulated on Twitter, show the supermarket shelves at an M&S outlet which have run out of food

The images were shared alongside the caption ‘nearly three weeks now and still nothing to get your teeth into in M&S in Paris,’ which attracted some  200 likes and 116 retweets.

‘If a large company like M&S is having these problems, imagine the problems for the numerous small companies trying to do business with Europe. What a disaster,’ one Twitter user commented.

‘One would have to wonder if M&S franchises in France can survive if this goes on much longer,’ another person wrote.

Another person posted pictures of empty M&S shelves, claiming they were taken at a branch in Lille.

A third post then purported to show an M&S in the Ledru-Rollin region of Paris with its shelves also standing half-empty. 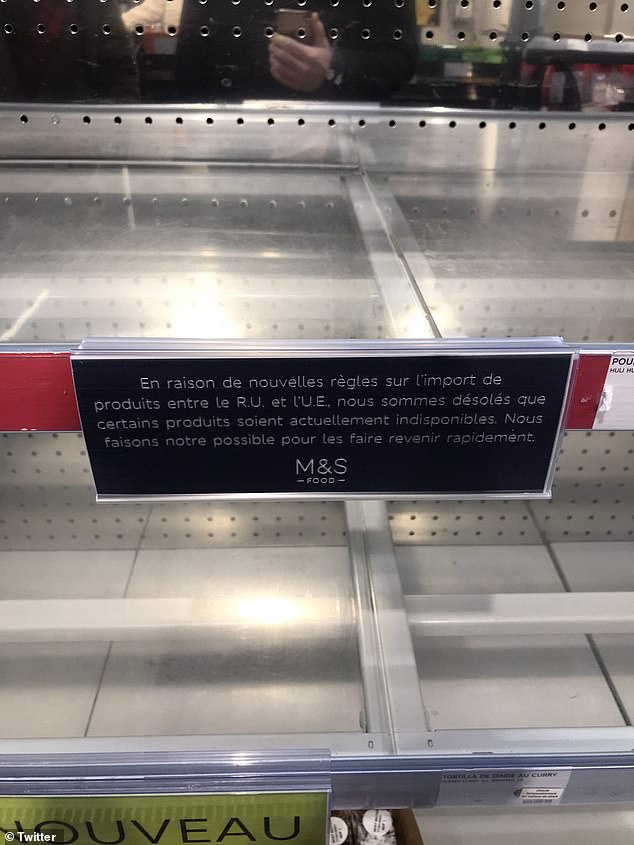 Another person posted pictures of empty M&S shelves, claiming they were taken at a branch in Lille, above and below 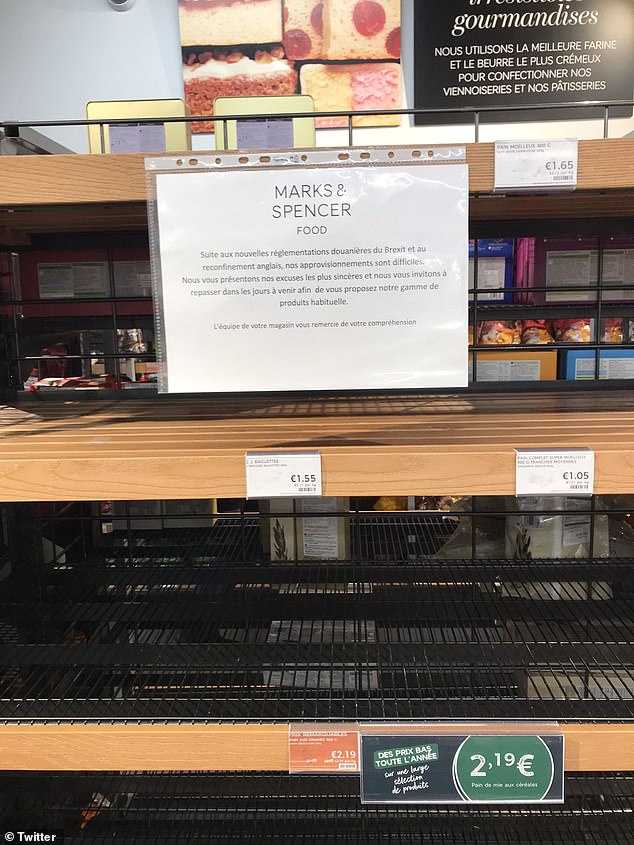 France24 journalist Catherine Bennett, who posted the video, wrote alongside it: ‘Popped by the Ledru Rollin branch of @marksandspencer today.

‘More than two weeks since Brexit and hey’re still having supply chain problems. Half the shop’s shelves are empty. It’s looking bleak.’

An M&S spokesman told MailOnline: ‘As we are transitioning to the new processes, it is taking a little longer for some of our products to reach stores, but we are working with our partners, suppliers and relevant Government agencies and local authorities to quickly improve this.’

Despite Boris Johnson securing a post-Brexit trade deal with the EU, goods entering and leaving the UK have been getting caught up up at the border as additional paperwork and extra checks slows the process to a crawl.

The problem is particularly acute in the fresh food industry because products have a short shelf-life, meaning delays can lead to the food going off in transit.

British fishermen have been particularly hard-hit, saying that exporting to Europe is no longer viable because of the delays.

Fifteen Scottish sea food truckers who drove to London to protest against post-Brexit bureaucracy that has prevented them exporting to the European Union were fined today by police for making ‘unnecessary journeys’. 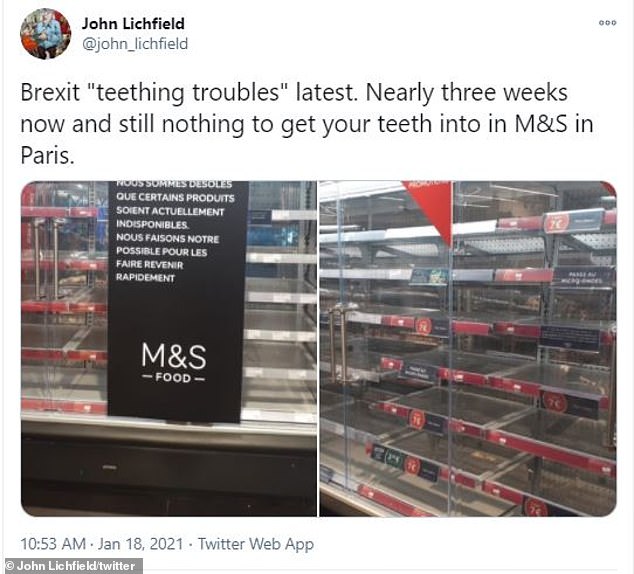 The post attracted over 200 likes and 116 retweets, with people speculating that post-Brexit chaos was to blame

Hauliers at the UK border have experienced delays since the transition period ended, with the discovery of a new mutant Covid-19 strain adding to the chaos. 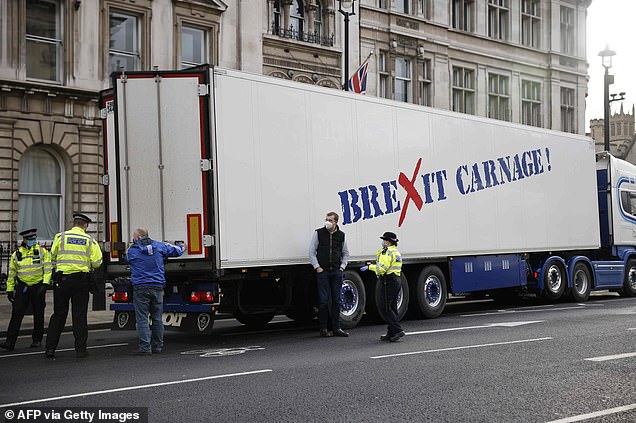 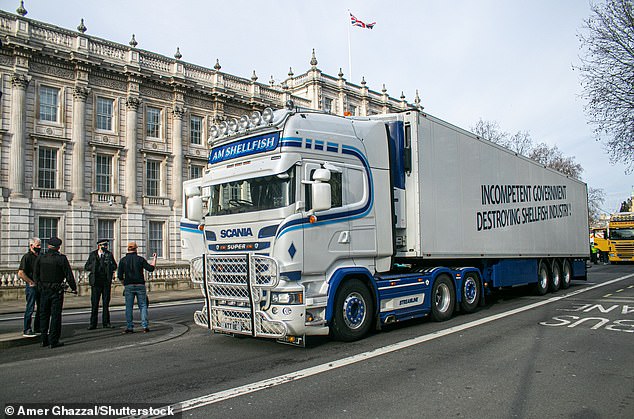 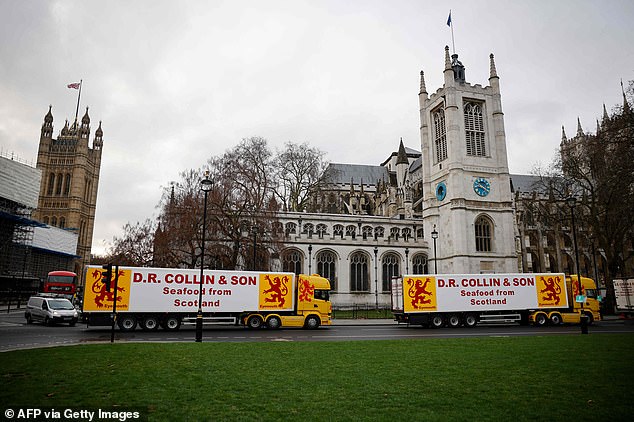 Importers in France say agents have adopted a ‘zero-tolerance’ approach that has seen deliveries delayed because Latin names of fish species were incorrectly entered on papers and because sanitary certificates were missing stamps.

Both fishmongers and seafood factories are now suspending orders from Britain as deliveries of salmon and lobster that used to take just 24 hours to end up on French shelves are now being held up for two or three days.

‘Nit-picking’ Dutch border police were also filmed confiscating ham sandwiches off a British truck driver as he crossed the border in line with post-Brexit import rules.

‘Welcome to Brexit,’ the officers were filmed saying – referencing new border rules which mean no fresh produce can cross without appropriate certificates.

Dutch customs officers also paraded a pile of confiscated items including muesli and Waitrose chicken fillets seized from from Britons crossing the EU border as they warned ‘you can’t just bring in food from the UK’.