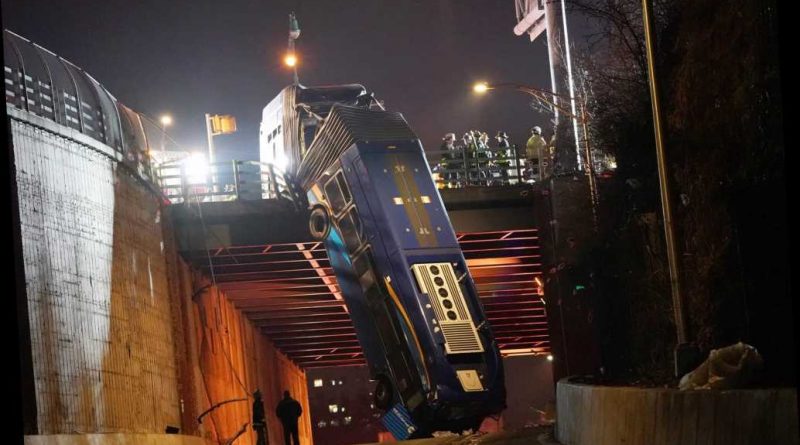 The MTA bus operator who lost control of his vehicle and careened off a Bronx overpass Thursday night refused a federally mandated drug and alcohol test, transit officials said at a briefing in Lower Manhattan on Friday.

“Our concern is that he then refused to participate in the FTA-mandated and MTA-mandated drug and alcohol test, which is extremely rare for someone not to cooperate with it, and obviously extremely troubling.”

The Bx35 driver was trying to turn left off University Avenue onto a ramp to the Washington Bridge around 11:10 p.m. Thursday when he veered off track, causing the vehicle to crash from the elevated road and leaving eight injured, including one seriously.

The bus was completely removed from the expressway Friday morning, heavily damaged in the front, with the windshield blown out. Blood could be seen on the dashboard.

Warren said the driver was going 17 to 26 miles per hour — more than quadruple the appropriate speed.

The 55-year-old — a bus operator for 11 years “with a clean record,” the MTA said — is being treated for bruises and minor injuries at St. Barnabas Hospital.