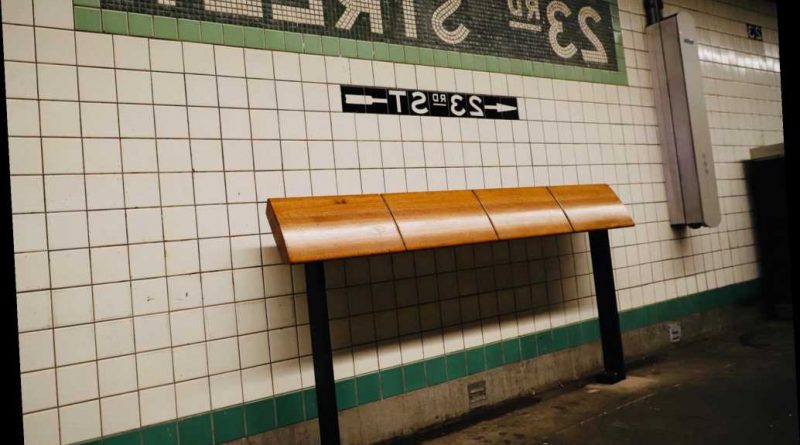 Man, 28, slashed in face during argument in latest subway attack

Benches have returned to a Manhattan subway station days after the seats were yanked in what the MTA initially characterized as an attempt to prevent homeless people from hunkering down on the seating.

The MTA began replacing the benches at the West 23rd Street F/M station on Tuesday, following a thorough scrubbing, an agency spokesman said in a statement.

“After being deep cleaned and disinfected due to an unsanitary condition, New York City Transit is replacing the benches at 23rd Street/6th Avenue Station,” said Tim Minton.

The MTA did not elaborate on the nature of the “unsanitary condition,” or clarify if the removal of the benches was always intended to be temporary.

But when the benches’ disappearance was first noticed Friday, the MTA gave no such indication in providing shifting remarks on the move.

“Benches were removed from stations to prevent the homeless from sleeping on them,” the MTA originally tweeted to a rider who inquired about the missing benches.

The explanation quickly racked up negative replies, and the tweet was eventually deleted, with an MTA spokeswoman saying that it was mistakenly sent.

“The tweet was posted in error and it has since been removed,” wrote Abbey Collins.

That statement did not offer any alternative explanation for the benches’ removal, and went on to detail the MTA’s efforts to help homeless in the system.

“The subway is not a substitute for a shelter and homeless New Yorkers deserve much better care,” Collins wrote.

“We have been working with the city on this important issue and have asked for more dedicated mental health and medical resources which are urgently needed to solve the homeless crisis that has been exacerbated by the pandemic.”

Minton issued a similar plea in confirming the benches’ return.

“The City is facing a mental health and housing crisis that has been exacerbated by the pandemic and we continue to urgently call for more resources so that vulnerable New Yorkers have access to the services they need and deserve,” he said.

The MTA did not, however, clarify whether the plan all along was to return the benches, or if the decision was made in light of the backlash.

For months, the agency has been regularly rousting the homeless from the system nightly between 1 a.m. and 5 a.m. to facilitate a disinfecting amid the pandemic.