Special Counsel Robert Mueller’s office has revealed it is in the possession of evidence that Roger Stone communicated with Wikileaks regarding the release of hacked Democratic Party emails.

In a court filing on Friday, Mueller’s office said it had gathered that evidence in a separate probe into Russian intelligence officers who were charged by the special counsel for hacking the emails during the 2016 presidential campaign and staging their release.

Stone responded to reports about the communications by saying the evidence was merely ‘innocuous Twitter direct messages’ that have already been disclosed to the House Intelligence Committee and ‘prove absolutely nothing’.

The longtime adviser to President Donald Trump was indicted last month for lying to Congress about his communications with other parties about the hacked emails. He pleaded not guilty.

Stone previously acknowledged having had brief exchanges with both WikiLeaks and Guccifer 2.0, but maintains that he never had advance knowledge about the emails’ release.

Mueller had not disclosed the evidence of communications with WikiLeaks until Friday. 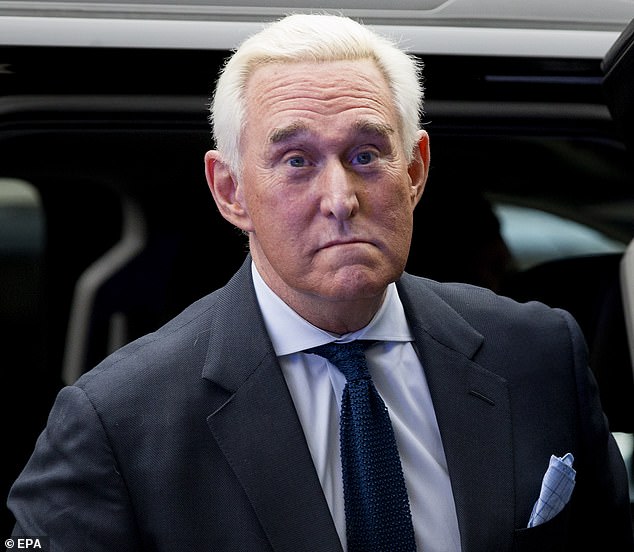 Special Counsel Robert Mueller’s office is in possession of evidence that Roger Stone communicated with WikiLeaks regarding the release of hacked Democratic Party emails ahead of the 2016 presidential election, prosecutors revealed in a court filing on Friday. Stone, a longtime adviser to President Donald Trump, responded to reports about the communications by saying the evidence was merely ‘innocuous Twitter direct messages’ that have already been disclosed to the House Intelligence Committee and ‘prove absolutely nothing’

‘The government obtained and executed dozens of search warrants on various accounts used to facilitate the transfer of stolen documents for release, as well as to discuss the timing and promotion of their release,’ Mueller’s team wrote in the latest filing in the US District Court in Washington, DC.

‘Several of those search warrants were executed on accounts that contained Stone’s communications with Guccifer 2.0 and with Organization 1.’

Organization 1 is a reference to WikiLeaks, while Guccifer 2.0 is a hacker persona US intelligence agencies say was a cover name used by Russian military intelligence.

WikiLeaks and Guccifer 2.0 each published emails and other documents from the Democratic Party in 2016 in an operation that Mueller alleges was part of a Kremlin-backed effort to tip the election in favor of then Republican nominee Trump.

WikiLeaks has previously denied any ties to or cooperation with Russia. 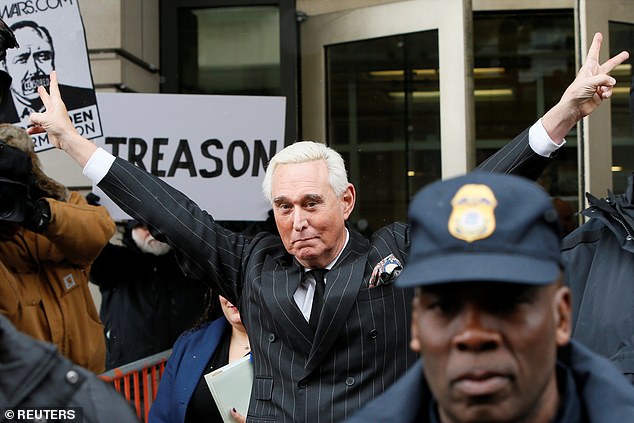 Stone was indicted last month for lying to Congress about his communications with other parties about the hacked emails. He pleaded not guilty. The judge overseeing his case no Friday barred him from making statements on the courthouse steps that might prejudice a jury

Also on Friday, the federal judge overseeing Stone’s case barred him from making statements on the courthouse steps that might prejudice a jury or witness in his case.

The order, by Judge Amy Berman Jackson, further gagged lawyers on both sides from statements that might impact the case.

‘Counsel for the parties and the witnesses must refrain from making statements to the media or in public settings that pose a substantial likelihood of material prejudice to this case,’ Jackson wrote.

But in the case of Stone, who has been ubiquitous in the media since his indictment, her order was narrower, prohibiting him from making his case to the public or the media while on the courthouse steps or nearby.

WHAT ROGER STONE IS CHARGED WITH BY ROBERT MUELLER

One count of obstruction: Mueller says Stone denied to Congress that he had emails and documents about WikiLeaks related contacted

Five counts of lying to Congress: Mueller details specific statements Stone made to Congress which the Special Counsel alleges are each lies

One count of witness tampering: Mueller alleges Stone tried to convince comedian Randy Credico to either lie to Congress or plead the Fifth by threatening him

All parties, including Stone and potential witnesses, must refrain from certain statements about the case when they ‘are entering or exiting the courthouse, or they are within the immediate vicinity of the courthouse’.

The prohibition applies to statements to the media or the public that ‘pose a substantial likelihood of material prejudice to this case or intended to influence any juror, potential juror, judge, witness or court officer or interfere with the administration of justice’.

Stone, who has blasted the FBI and the Mueller probe since his indictment, while hawking his book and wearing ‘Roger Stone Did Nothing Wrong’ t-shirts, will now have be conscious of where he is when he speaks.

As if anticipating a potential gag order, Stone gave a series of TV interviews immediately following his arrest, and took a somewhat lower profile after his court hearing in Washington where a potential gag was discussed.

Stone has made efforts to bash the prosecutors who charged him, railing against ‘Gestapo’ tactics in his arrest, which included use of armed agents, and according to Stone ‘frog men’ positioned in a canal behind his Ft Lauderdale home.

He has not said publicly that he is seeking a pardon from President Trump, saying the only person he is seeking relief for is Marcus Garvey. Although the judge mentioned the potential for prejudice – influencing a jury that might hear the case – Stone had other reasons to talk.

He regularly complains about his mounting legal debts, and relies on his attacks on adversaries and the mainstream media to raise funds.

Since those statements have been in TV interviews and online appearances, they do not appear to be impacted by the current order – although it could be modified later. The order stated there will be no additional resrtictions ‘at this time.’

He is in a prolonged public spat with Mueller witness Jerome Corsi over the chain of events and WikiLeaks contacts during the campaign. Stone is accused of witness tampering by launching online threats against comedian Randy Credico, including threatening his dog, according to the government.