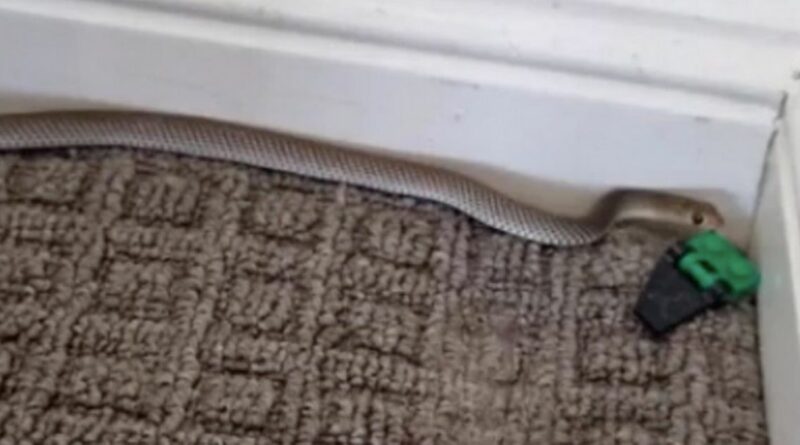 A mum has shared the heart-stopping moment she found an unwelcome guest lurking behind her children’s toy kitchen.

Emma Chong’s son Chase, aged seven, had noticed a tail peeping out from behind his toys at their home in Queensland, Australia.

He quickly called for his mum and what she discovered left her petrified.

Her son screams in terror before she brings the camera behind the toy set to show what reptile it is.

It turns out to be a “mildly venomous” yellow-faced whipsnake.

They are not known as an aggressive species but their bite is said to cause “extreme pain”.

Thankfully, brave Emma managed to capture the snake and release it safely back into the wild.

The video has been seen more than 50,000 times since being shared to TikTok earlier this week.

And viewers were understandably petrified by what they saw.

“And that’s why I live where the cold air hurts my face 80% of the year,” one commented.

A third added: “Ugh. Me being the Paddy that I am, was thinking mouse. No no no I’ll stay in the snakeless land thanks.”

While someone else said they would “die of a heart attack” if they encountered the reptile.

It comes after another woman was recently petrified after noticing some furry legs poking out of her bathroom tap.

After the video was viewed more than 800,000 times, many viewers speculated the creature was actually a spider.

One person commented: "Why did I feel like the spider was going to jump at the camera?"

A second viewer said: "Me laying in the bath poking my toe up the tap nope never again."

Another person wrote: "That thing was about the take my life out."