Pictured: Muslims across the globe break their Ramadan fast with the large iftar feasts shared with family and friends

Muslims around the world have been breaking their Ramadan fast with a large feast known as ‘iftar, shared with family and friends.

They traditionally break their fast like the Prophet Muhammad did some 1,400 years ago, with a sip of water after sunset prayers.

Hundreds of millions of Muslims began fasting on Thursday from sunrise to sunset for the month. 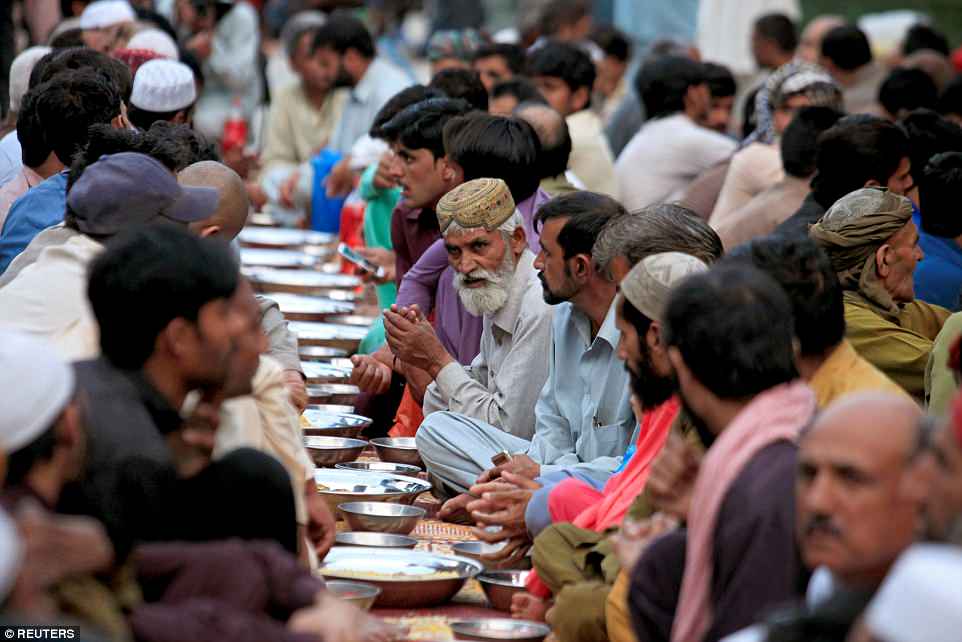 Men pray before breaking their fast during the Muslim holy month of Ramadan in Rawalpindi, Pakistan 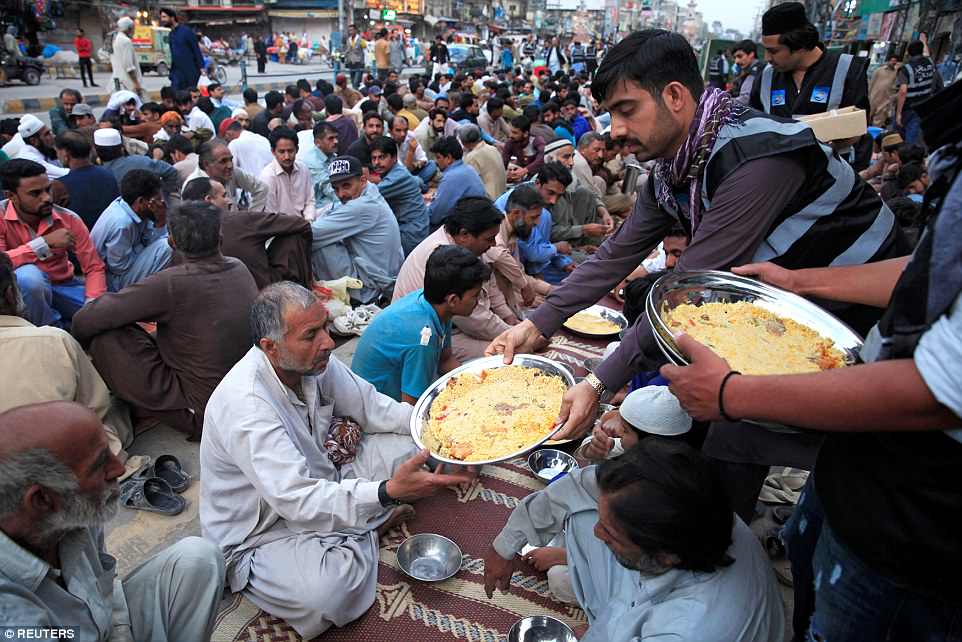 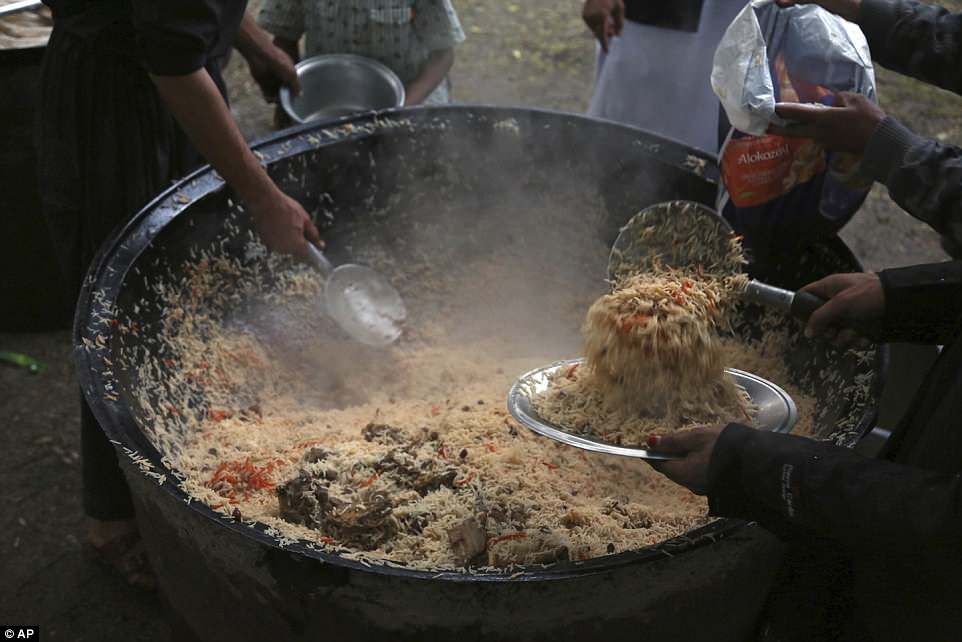 Afghan cooks serve rice on the first day of the holy month of Ramadan, in Kabul 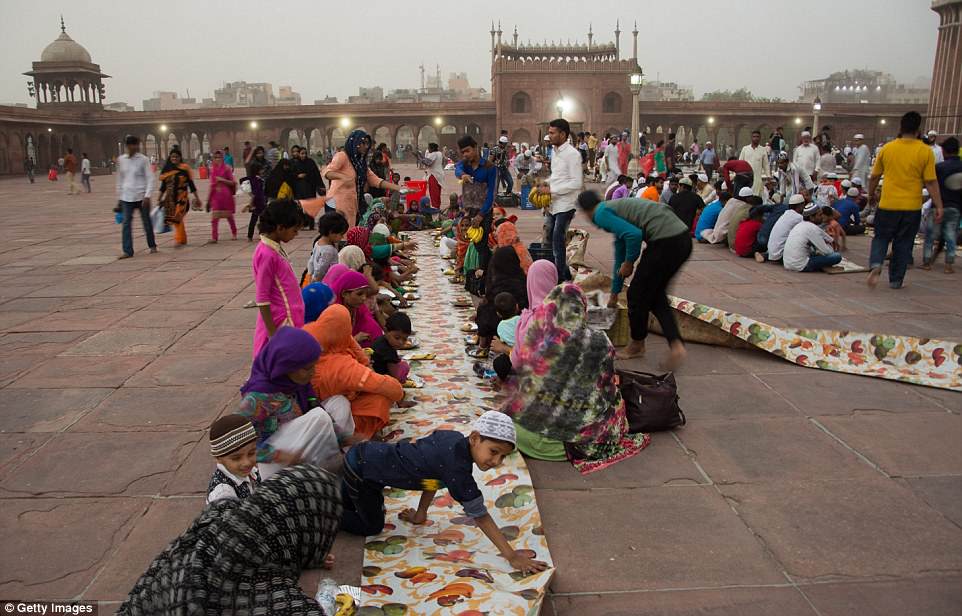 Fasting is meant to draw worshippers closer to God through sacrifice, remembrance and heightened spirituality.

It’s also meant to be a month of gratitude in which the faithful are reminded of the suffering of those less fortunate.

Iftar is a social event as much as it is a gastronomical adventure.

Across the Arab world, apricot juice is an iftar staple though in South Asia and Turkey, yogurt-based drinks are popular.

Every night of Ramadan, mosques and aid organizations set up tents and tables for the public to serve free iftar meals.

Muslims living in the Northern Hemisphere will fast through especially long days this year, with the sun setting as late as 9 p.m. in cities like London.

For those living even farther north, Muslim scholars advise those fasting to adhere to time zones of the nearest Muslim-majority city or country.

Once the start of the holy month is declared, Muslims share greetings such as ‘Ramadan kareem’ and ‘Ramadan mubarak’ via text messages, calls and emails to family and friends. In the Afghan capital Kabul, a man prepares plates of food for people who are fasting Pakistani bakers prepare Iftar food. Every night of Ramadan, mosques and aid organizations set up tents and tables for the public to serve free iftar meals 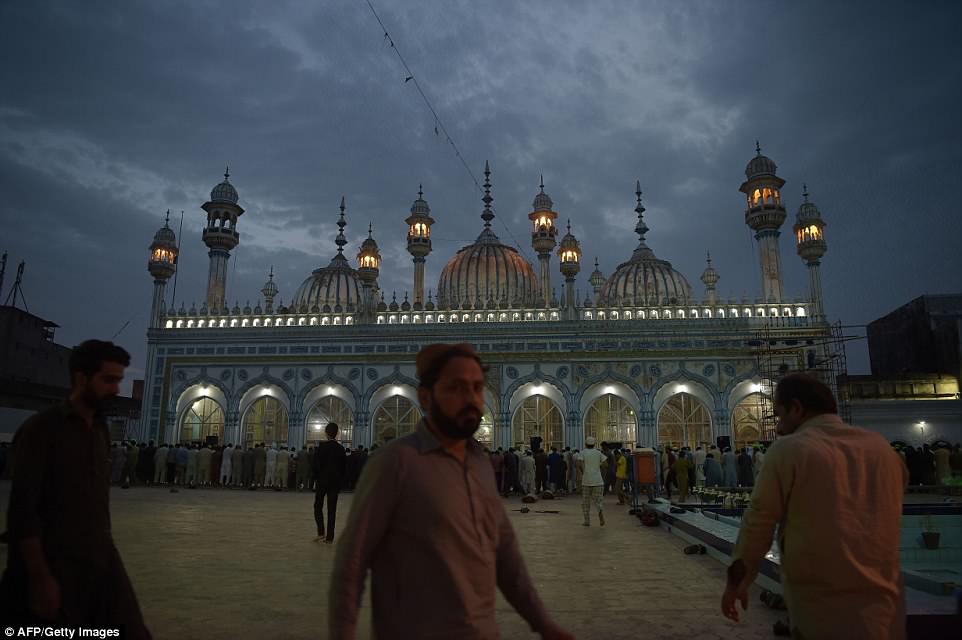 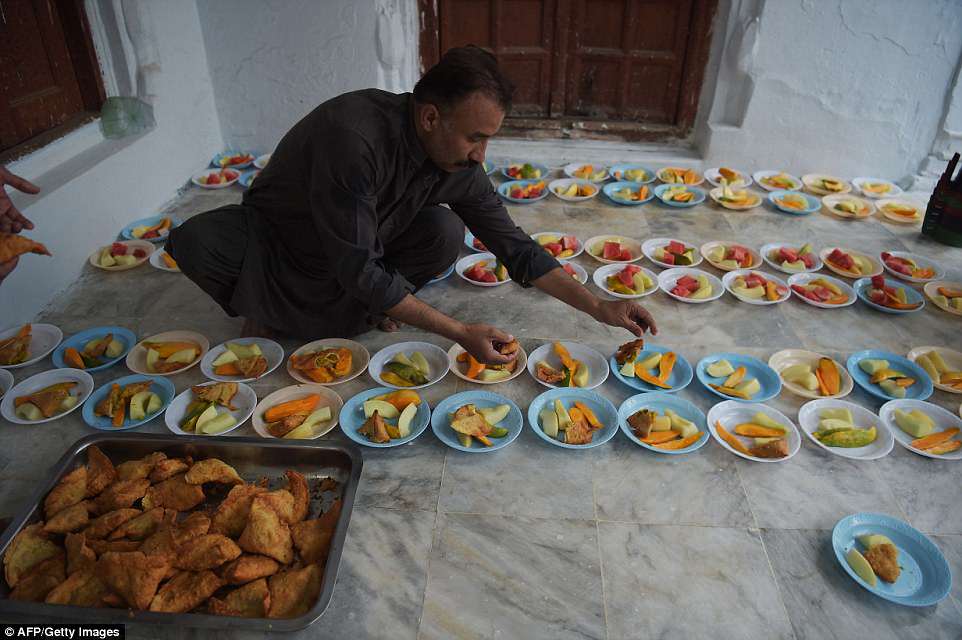 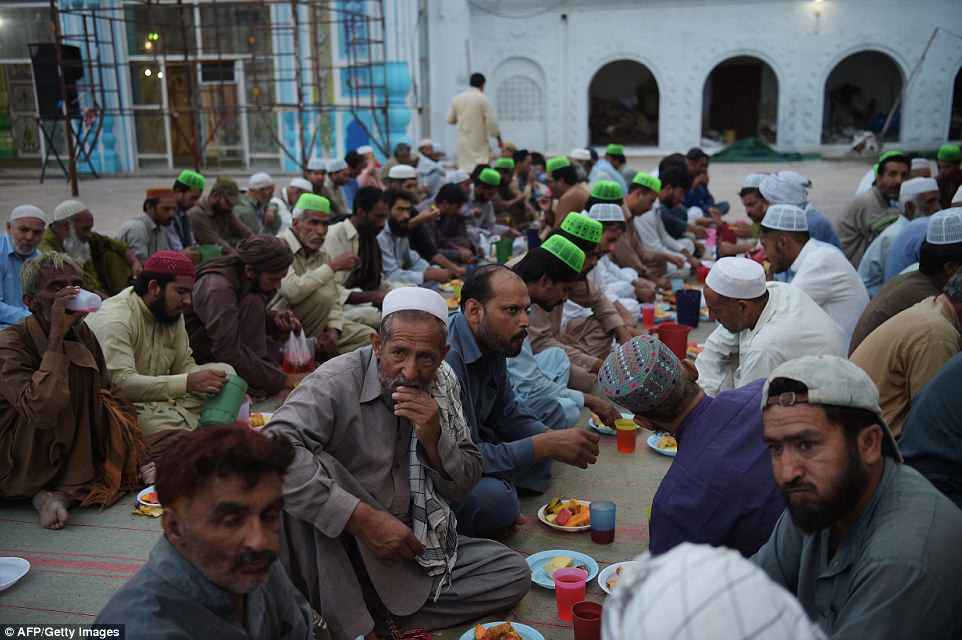 Men breaking their fast at the Jamia Mosque. Across the Arab world, apricot juice is an iftar staple though in South Asia and Turkey, yogurt-based drinks are popular 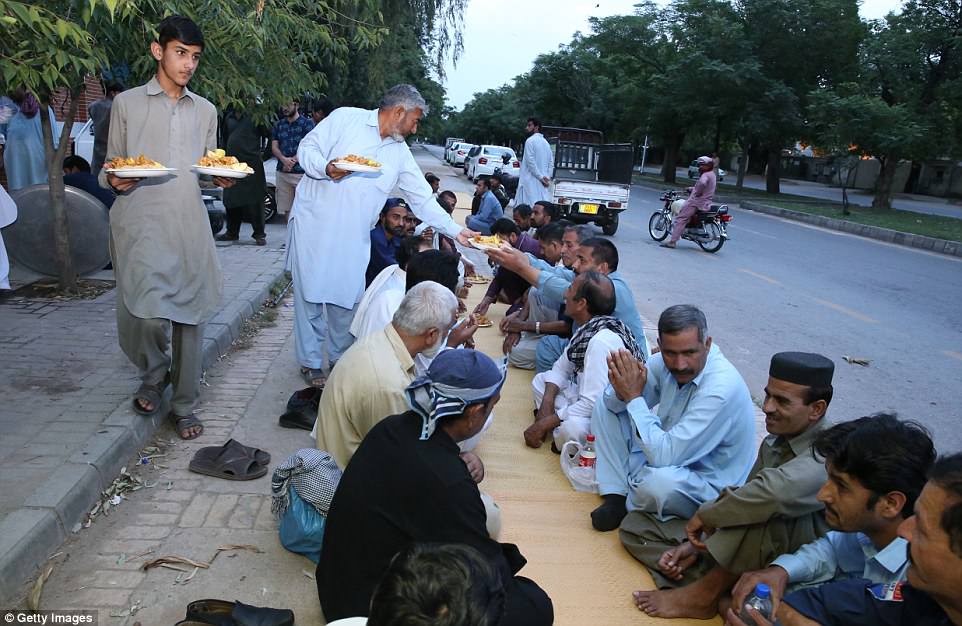 Another hallmark of Ramadan is nightly prayer at the mosque among Sunni Muslims called ‘taraweeh.’

Egyptians have the tradition of the ‘fanoos,’ a Ramadan lantern that is often the centerpiece at an iftar table or seen hanging in shop windows and from balconies.

In the Arabian Gulf countries, wealthy families hold ‘majlises’ where they open their doors for people to pass by at all hours of the night for food, tea, coffee and conversation.

Increasingly common are Ramadan tents in five-star hotels that offer lavish and pricey meals from sunset to sunrise.

While Ramadan is a boon for retailers in the Middle East and South Asia, critics say the holy month is increasingly becoming commercialized.

Scholars have also been disturbed by the proliferation of evening television shows during Ramadan. Muslims wait for the first iftar dinner of the holy Islamic month of Ramadan at Jama Masjid in New Delhi, India Food being prepared at a mosque in Yogyakarta, Indonesia. Breaking the fast together is a tradition of the mosque, which serves more than 2000 meals Afghanis break their fast with a sip of water, like the  Prophet Muhammad did some 1,400 years ago 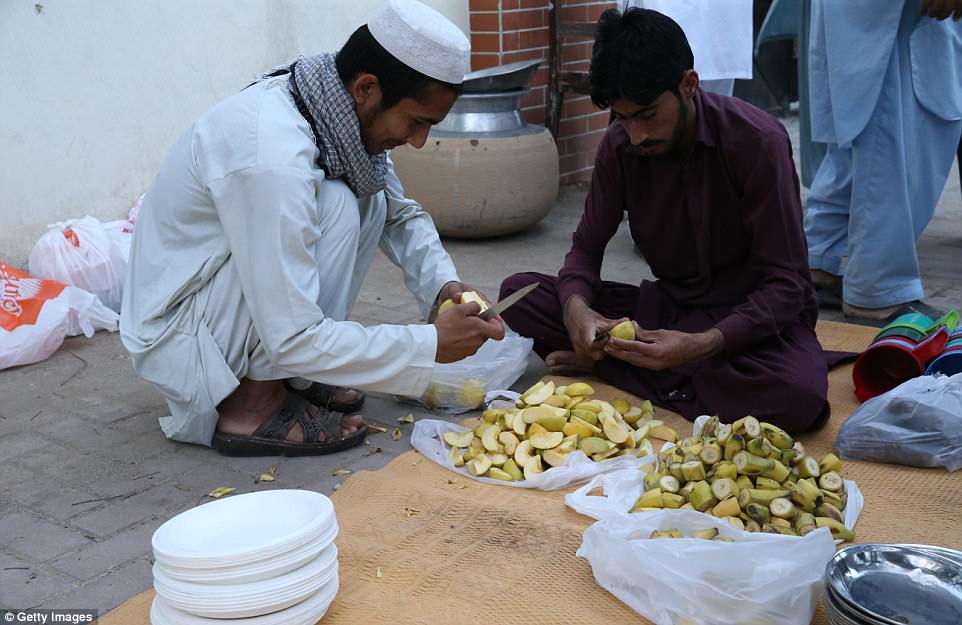 Pakistani mosque volunteers preparing fruit to be eaten at iftar, when Muslims across the globe break their fast during Ramadan

In Pakistan, live game shows give away gifts promoting their sponsors.

In the Arab world, month long soap operas rake in millions of dollars in advertising.

Children, the elderly and the ill are exempt from fasting, as well as women who are pregnant, nursing or menstruating.

Travelers, including athletes taking part in tournaments away from home, are also exempt from fasting.

The end of Ramadan is marked by intense worship as Muslims seek to have their prayers answered during ‘Laylat al-Qadr’ or ‘the Night of Destiny.’

It is on this night, which falls during the last 10 nights of Ramadan, that Muslims believe God sent the Angel Gabriel to the Prophet Muhammad and revealed the first verses of the Quran.

After these intense nights of prayer, the end of Ramadan is met with a three-day holiday called Eid al-Fitr. Children often receive new clothes, gifts and cash.

Muslims attend early morning Eid prayers the day after Ramadan. Families typically spend the day at parks, eating in the sunshine for the first time in a month.