The mystery of Melania Trump continues amid reports the first lady is privately advising President Donald Trump to concede the election even as she publicly tweets support for his claims of voter fraud.

Melania Trump, along with Jared Kushner, have had conversations with the president about how it’s time to concede to Democratic rival Joe Biden, both CNN and Politico reported.

But after the reports appeared, the first lady tweeted in support of her husband: ‘The American people deserve fair elections. Every legal – not illegal – vote should be counted. We must protect our democracy with complete transparency.’

Trump has claimed voter fraud in the battleground states that gave Biden the presidency but he’s offered no proof of his claims.

And senior Trump campaign adviser Jason Miller took issue with the CNN story, writing on Twitter: ‘This story is not true.’

The East Wing did not immediately respond to DailyMail.com’s request for comment. 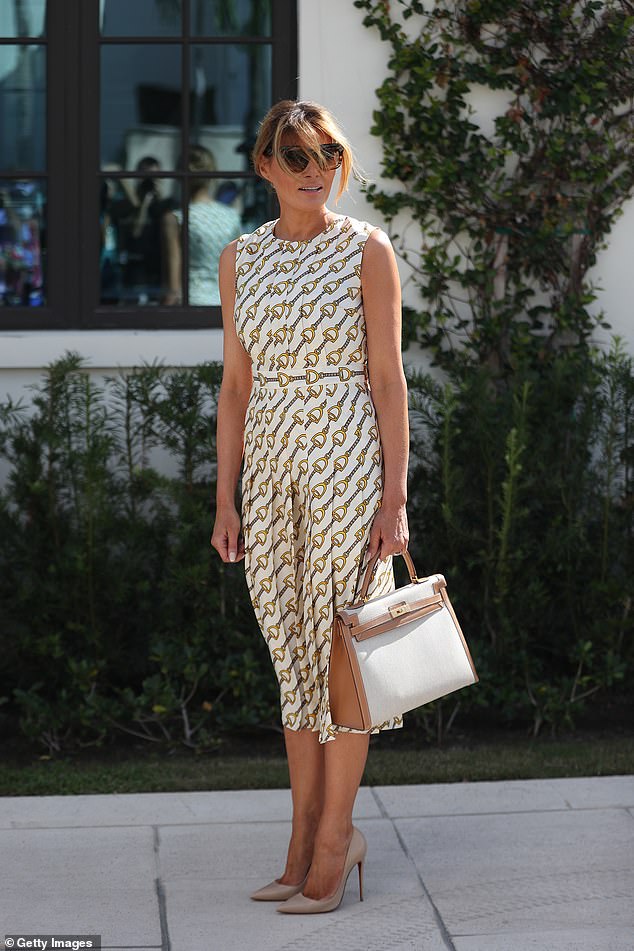 Melania Trump is reported to have advised her husband to concede the election as she publicly tweets support for his vote counting claims; above the first lady after voting in Florida last week 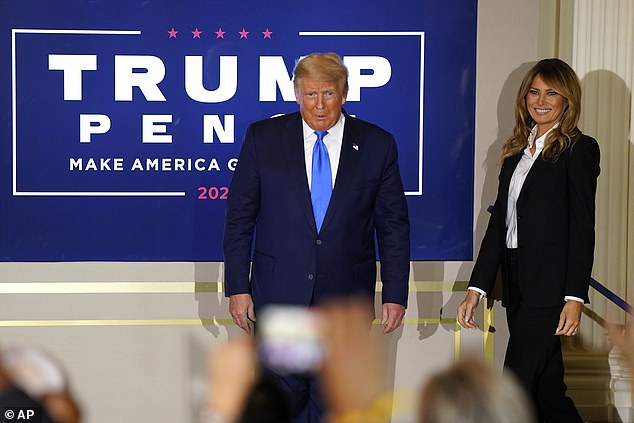 Melania Trump, with President Trump, at the White House on election night

It’s all part of the enigma of Melania Trump.

The famously private first lady rarely gives interviews or speaks to the press.

She largely has stayed out of the public eye during the coronavirus pandemic, communicating through her social media channels, where she encouraged people to wear a mask and follow CDC guidelines on the disease.

She advocated wearing masks but took hers off at the first presidential debate – in defiance of the organizers’ rules. She, along with the president and their son Barron, tested positive for COVID a short time later.

She issued one of the longest statements of her White House tenure in the wake of the diagnosis – describing how she felt, her treatment regime of vitamins and healthy food, and her worry about learning her son had contracted the virus.

She rarely reveals her private thoughts, which is why it was jarring to hear her in conversations taped by her former friend and staffer, Stephanie Winston Wolkoff.

Melania Trump rarely speaks in public and, when she does, she usually uses prepared remarks and a teleprompter. The recordings let listeners hear the first lady unplugged, at times obviously upset about her life in the administration.

In one, Melania is heard complaining ‘who gives a f*** about Christmas stuff’ while discussing the traditional first lady task of decorating the executive mansion for the holiday.

The tapes were released when Wolkoff appeared on CNN on October 1, hours before it was announced Melania and Donald Trump tested positive for Covid-19. Wolkoff was promoting her memoir, ‘Melania & Me,’ which portrays the first lady in an unflattering light. Melania Trump has blasted the book as ‘idle gossip.’

The taped conversation appears to have taken place shortly after Melania visited a immigration detention center in McAllen, Texas, back in June 2018.

She huffed ‘give me a f***ing break’ while complaining about criticism she received for her husband’s policy of splitting up families who illegally crossed the border while at the same time having to decorate the White House for Christmas. The East Wing begins for the holiday season in June.

‘They say I’m complicit. I’m the same like [President Trump], I support him, I don’t say enough. I don’t do enough,’ Melania says.

‘Ok, and then I do it. And I say that I’m working on Christmas planning for the Christmas. And they said, “Oh, what about the children that they were separated?”

‘Give me a f***ing break. Where they were saying anything when Obama did that?’ she said. 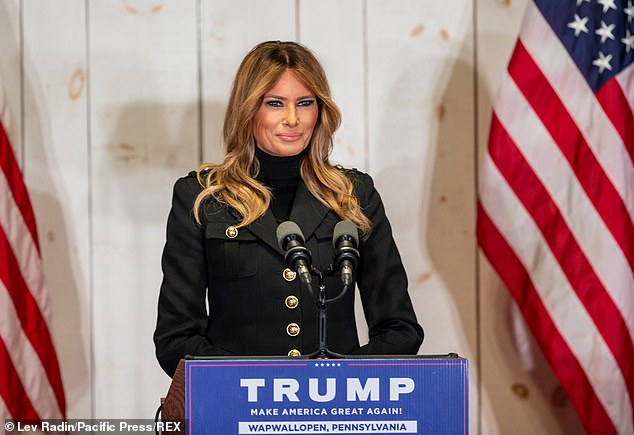 Melania Trump held four campaign rallies for her husband, including the one above in Wapwallopen, Pennsylvania 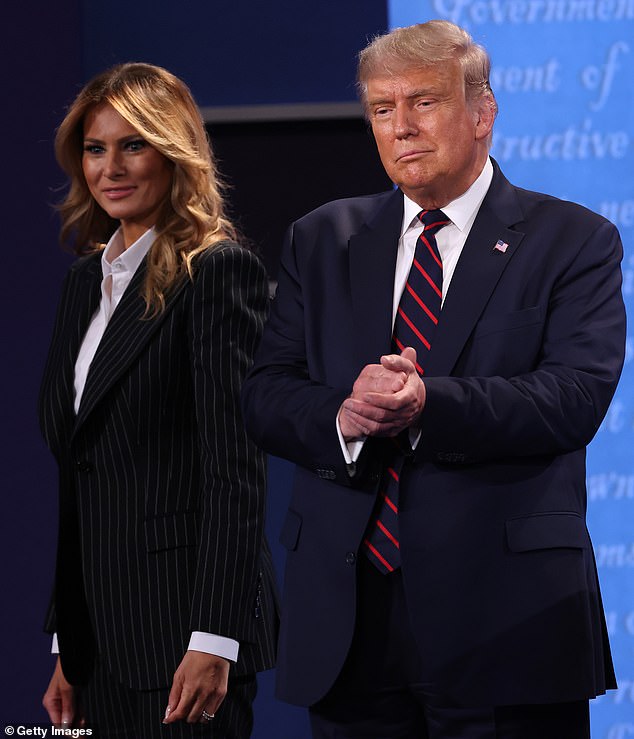 Melania Trump with President Trump at the first presidential debate; the first couple and their son Barron were diagnosed with coronavirus shortly thereafter 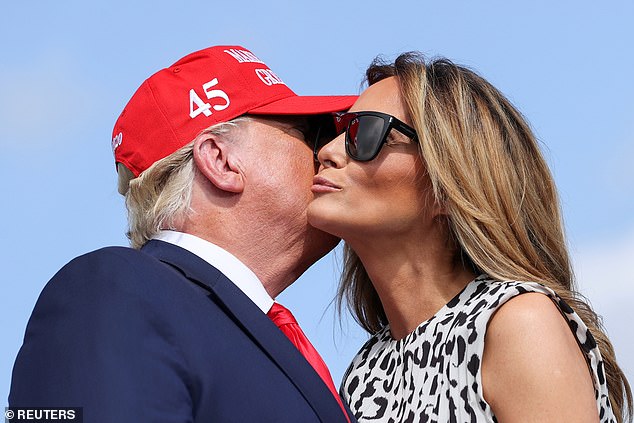 Melania Trump at a campaign rally with President Trump in Tampa, Fla.

When it came to her husband’s bid for a second term, Melania Trump was noticeable for her absence.

Trump’s two eldest sons, Don Jr. and Eric, have been advising him to keep up the fight and legally challenge the election results.

And President Trump tweeted late into the night on Sunday, continuing to push claims of voter fraud as he refused to concede the election to Biden.

In a slew of tweets sent around midnight Washington time – two of them flagged by Twitter for containing disputed information – the President pushed videos of his allies on Fox News alleging voter fraud and other irregularities, while calling for all claims to be fully investigated before the election result is allowed to stand.

It comes amid reports that Trump is planning a series of rallies where he will show off obituaries of dead people that his campaign claims were allowed to vote, while touting other allegations of fraud.

The Trump campaign is also said to be putting together ‘a campaign-style media operation’ to challenge the result, while building up staff numbers in states where legal challenges and recounts are likely to go ahead.

Some Republicans are urging him to accept defeat including former President George W. Bush who issued a message telling him the election’s outcome was ‘clear’ and Chris Christie who said it was time for him to show evidence or ‘move on.’

Biden is ahead by 43,000 votes in Pennsylvania, 148,000 votes in Michigan, 34,000 votes in Nevada and 13,000 votes in Arizona, with ballots still being counted. Even if all of Trump’s current challenges are successful, experts believe they are unlikely to overcome those margins. The campaign has promised more challenges to come.

A recount has also been called in Wisconsin, where Biden is up by 20,000 votes, and is likely in Georgia, where he is currently up by 10,000, but they are unlikely to overturn those results.

The Trump campaign has yet to produce any evidence to back its claims of widespread fraud.