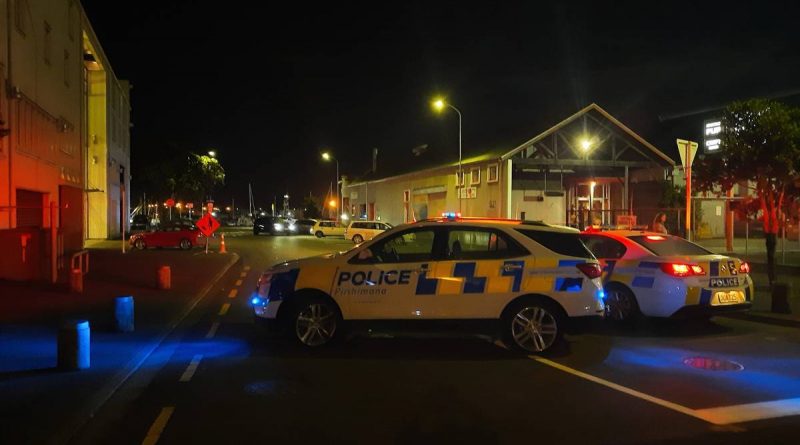 Witnesses say at least two people have been shot in an incident outside one of Napier’s main nightlife hotspots.

More than 20 police officers – many armed – were at 12.30am on Sunday swarming West Quay, Ahuriri, a thriving bar and club scene in the city. The clubs in the area were shut for the night.

It is understood a St John ambulance has taken at least one person to Hawke’s Bay Hospital.

Police at the scene declined to confirm what had happened and a request for more information was not immediately responded to by the police’s media team.

Revellers spilled into the streets in the chaotic aftermath of the shooting, many of whom were in shock at what they had witnessed.

Hana, from the Czech Republic, said she was waiting near the head of a 20-strong queue to get into the Thirsty Whale nightclub when a large fistfight between roughly a dozen people broke out on the footpath nearby.

A small group of people then peeled off from the fight and jumped into a parked car on West Quay, she said.

“Suddenly they were shooting,” she said, referring to one of the people in the car.

“I dunno, I was in shock, like I couldn’t move. I was just trying to hide myself somewhere but I was in shock and I didn’t do anything. There was some kind of barrel at the bar entrance and I hid myself behind it.:”

Hana said she witnessed the barrel of a gun appear from the car window, masked by clothing, before watching as between three and five shots were fired.

At least two men were shot and injured, one in the shoulder-to-arm area, and another in the leg or groin region, she said.

Both the men that she saw get shot were bleeding but conscious in the minutes after the incident, she said. Authorities were unable to immediately provide an update on the injury status of the two men.

Hana said in the aftermath of the shooting, there was significant fear among those outside.

One of the men involved in the fight, who wasn’t in the car, ran into her line when she thought to herself:

“‘OMG, they will be shooting at him, and if they shoot at him here, I will get shot’.”

Security barricaded in the people already inside the Thirsty Whale and Hana remained outside until the gate was lifted and she was able to join her friends inside. The bars in the area were then shut down.

Cacia Wiggins was inside the Thirsty Whale at the time of the shooting and said the roller doors immediately came down before she was eventually evacuated out a back entrance.

“They had blocked off the streets all through Ahuriri and had what looked like 20+ officers spread out through the streets armed and waiting.

“I kept asking if they had found the shooters but I never got a straight answer.”

Hana, who has been travelling in NZ since September 2019, said she could not believe the amount of violence she had witnessed in the country, and has now had to visit a police station seven times in the 18 months she’s been here.

“I would like to say that NZ is considered a safe place but that’s not true.”

“Every single city, something happens.”