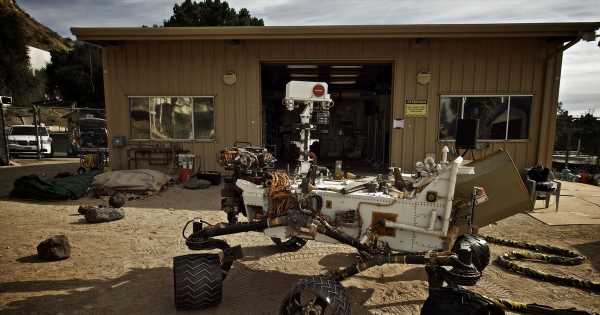 NASA has announced it will extend the deep space missions of eight of its spacecraft – including fascinating expeditions that will encounter a whopping 1,200 foot asteroid, monitor earthquakes on Mars and seek ice on the moon.

Boffins from the multi-billion dollar space organisation chose each mission carefully, with a team of over 50 experts prioritising where their cash should end up.

She added the missions “obtain valuable new science data, and in some cases, allows NASA to explore new targets”.

The Daily Star has taken a look at all eight missions and the exciting aims they could achieve.

OSIRIS-APEX: Taking a chunk off an asteroid

This daring space mission is set to take a whopping nine years to complete its task, but the wait could be worth it when it encounters huge space debris.

NASA’s spaceship will have unprecedented access to the object which it will study close-up and report back.

Incredibly, NASA’s machine has built in gas thrusters which are going to attempt to dislodge small rocks below its surface to deliver back to Earth.

This impressive mission will enable scientists to get better data than ever before on land movement on Mars, dubbed “marsquakes”.

It will gather valuable information on Mars’ interior, formation, and current activity.

The equipment is the only active seismic monitor in space and will monitor the planet's weather too, although NASA says it is at risk from a “dust devil” in Mars’ atmosphere.

This is the first mission of its kind that can explore previously untouched areas of the moon, including the mysterious permanently shadowed regions.

Scientists are hoping that exploration into these unexplored new regions can provide fresh data on water ice.

As well as searching for liquids, the robot will provide crucial support for any future attempts to go to the moon.

NASA’s equipment is set to carry out brand new studies into rocks and potential ice below Mars’ surface.

Through studying thermal rocks, boffins can check for radiation on the far-away planet.

The Mars Odyssey mission will take its climate monitoring on Mars to new highs, with real-time data relays.

New Horizons: Going further than ever before

This impressive piece of space kit has already flown as far away as Pluto in 2015 and the Kuiper belt object Arrokoth in 2019.

But it is set to carry on exploring the deepest parts of our solar system and could delve into parts of the atmosphere never explored in the past.

Stay in the loop with all the craziest Daily Star news by signing up to our free newsletter here.

The final three missions extended by NASA all concern Mars’ surface, with a variety of scientific aims and equipment.

MAVEN is set to look at the interaction between Mars’ atmosphere and magnetic field, whilst the Mars Science Laboratory will study the critical sulfate-bearing layers.

The Mars Reconnaissance Orbiter will delve into the evolution of Mars’ surface and active geology, as humans find out more and more about the solar system.