Crocs in Costa Rica, fancy footwork on Ipanema beach and skyscrapers in Macau: The stunning images featured in National Geographic’s Travel Photographer of the Year contest

National Geographic’s Travel Photographer of the Year competition has attracted a host of stunning entries from crocodiles in Costa Rica to wild horses in Iceland.

Its People’s Choice Award gives people the chance to vote for their favourite photographs which are captured in beautiful locations around the world, while the other winners are decided by judges.

At the end of June the winners of the competition will be announced.

The grand prize winner of the competition is set to win around £7,500 while two first place winners could win more than £3,300.

The closing date for votes for the pictures,which can be see below, is June 15 at 4pm. 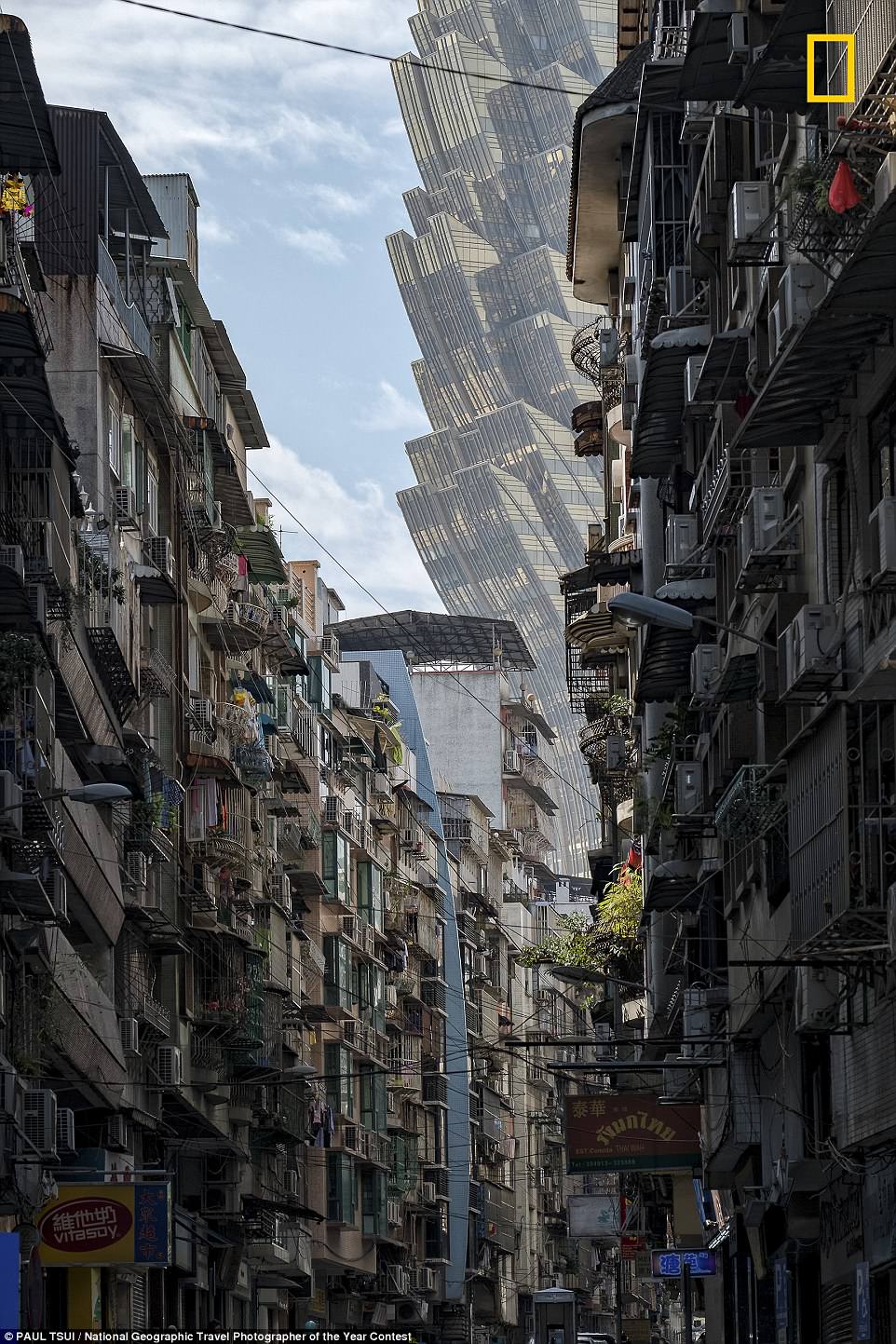 Paul Tsui’s picture of a quiet street in Macau, a city in southeast China which is rapidly changing 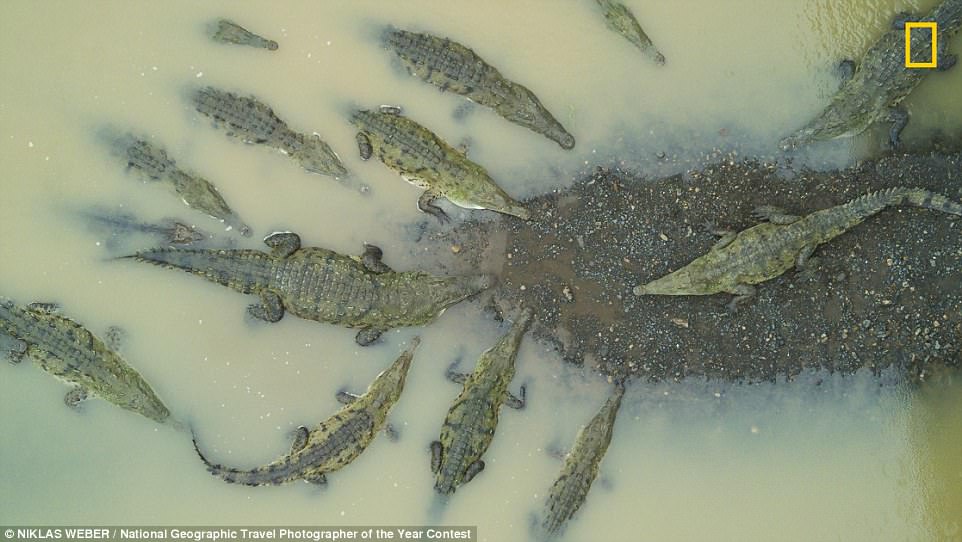 Niklas Weber’s picture of a group of  sharp-mouthed crocodiles in Costa Rica which he captured using a drone. Niklas said: ‘When we arrived at the Rio Tarcoles in Costa Rica and I saw what a fantastic formation the sharp-mouthed crocodiles are, I could not help myself, I started my drone and begun to photograph them from the air. My heart was beating like crazy because I was incredibly excited, on the one hand I was a bit scared for the drone, on the other hand I was so happy about the unique moment.’ 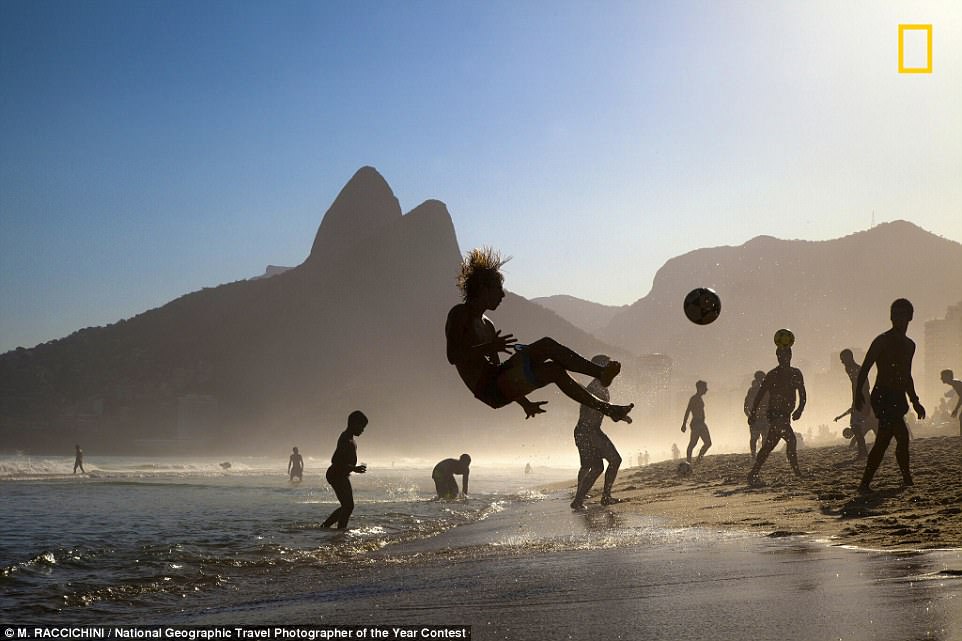 M Raccichini’s took this snap on Ipanema beach in Rio De Janeiro. It shows Maresia, or sea spray –  generic names used to refer to aerosol deriving from the wind that causes a nebulised cloud that forms on the crest of the waves. The photographer said: ‘On some days a thick blanket accumulates on the beach and there is a strong smell of the sea. For several days i was fascinated and so i went back to this beach to take this picture.’ 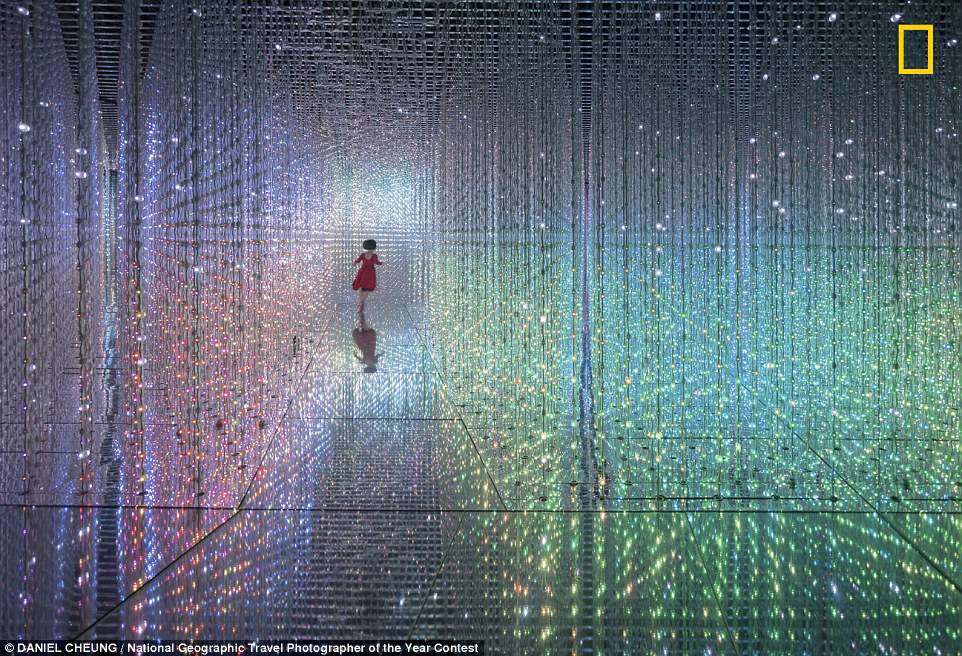 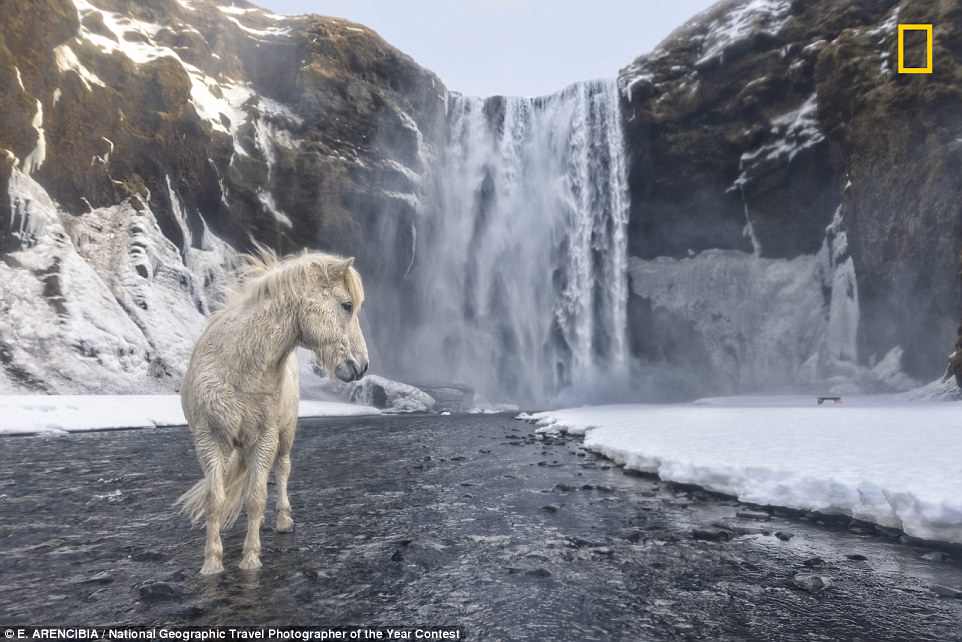 E Arencibia’s shot of a wild and majestic horse which was taken in Eyvindarholar, in southern Iceland. The photographer said:’Wild Iceland – If already one of the most beautiful landscape ever seen, imagine to get there and find this wild and majestic Icelandic horse posing for me That morning I was wondering if it would be worth it to go…bad weather, cold, not good light conditions…but you never know what you are going to find’ 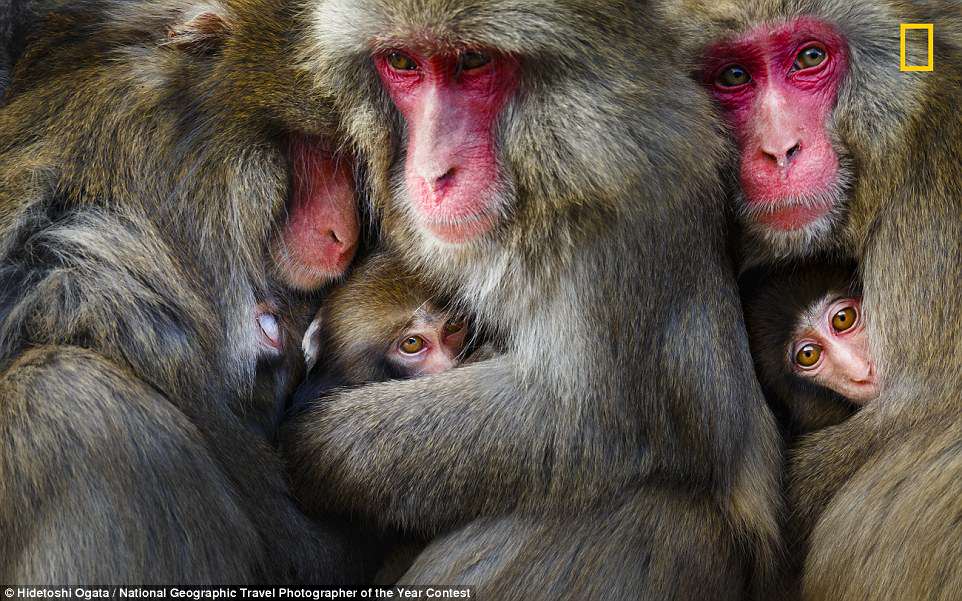 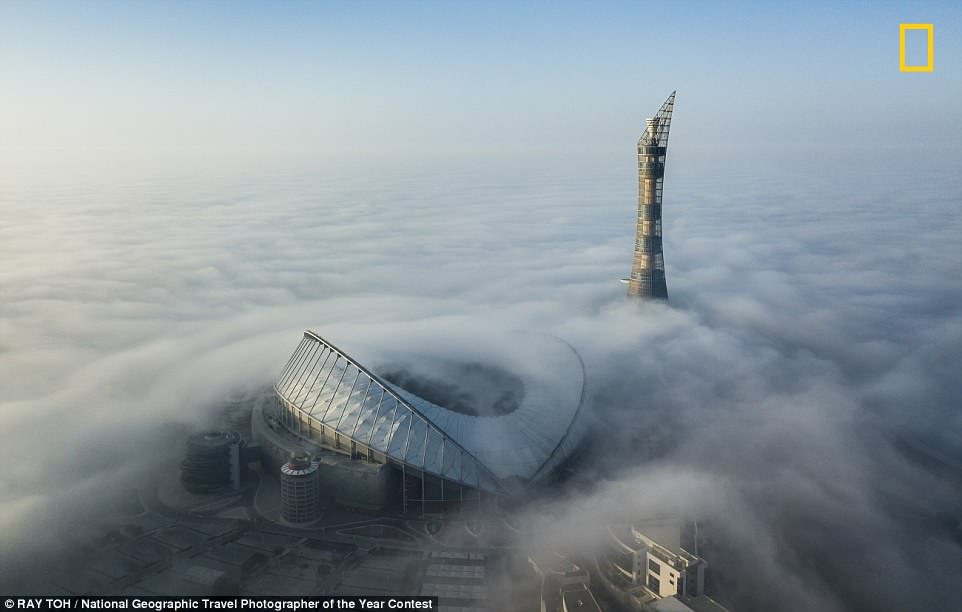 Poking out of the fog in this picture taken by Rah Toh is the first World Cup 2020 stadium to be completed in Quatar. 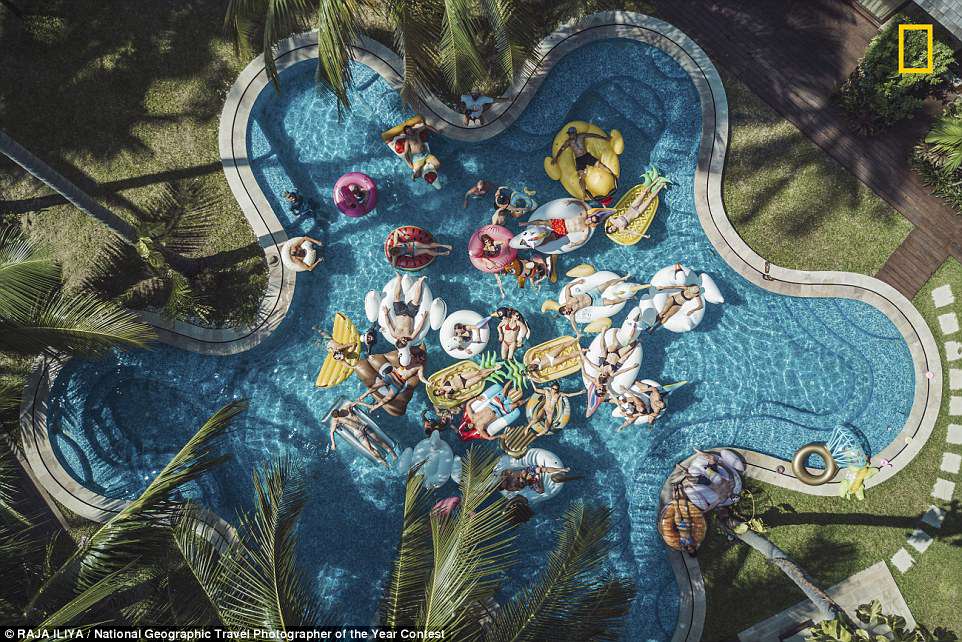 Raja IlIya took this picture of people enjoying summer in Koh Samui, Thailand by relaxing in a pool 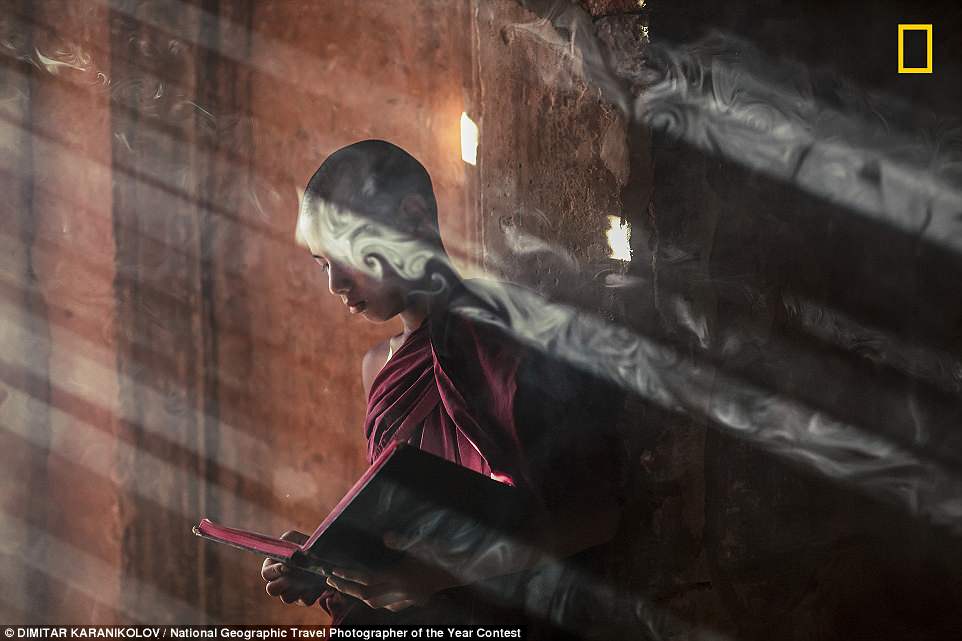 A young novice monk reading a book in Bagan, Myanmar which was taken by photographer  Dimitar Karanikolov