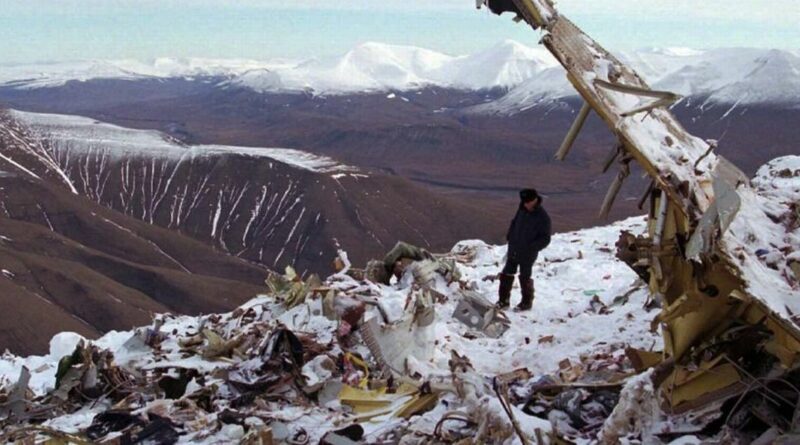 'Navigation errors' and miscommunication saw a packed jet smash into a mountain as it headed for a coal-rich Soviet mining settlement, killing everyone on board.

Vnukovo Airlines Flight 2801 was transporting Russian and Ukrainian workers to one of the country's mining settlements to Svalbard Airport on Spitsbergen, the largest island in Svalbard, Norway.

However, less than 10 miles shy of its destination, the flight – which was 26 years ago today – ended up in a crumpled mess on the flat, icy top of Operafjellet, an ominous-looking 3000ft mountain.

All 141 people, 11 crew members and 130 passengers – of whom three were children – were killed, making it the deadliest aviation accident in Norwegian history.

A Norwegian investigation found that there were several contributing factors to the accident.

Firstly, a lack of English created a misunderstanding with air traffic control, based off site in Bodo, northern Norway.

After the crew requested clearance to start their descent a lack of communication with Bodo ATCC meant it was not obtained.

The same language issues also meant that their request to use runway 10 at Longyearbyen Airport wasn't understood. The crew decided to use runway 28, which control had said was free.

However, a new approach briefing was not accomplished and the aircraft was off course and, despite uncertainty and disagreement in the group, the approach was not abandoned as it should have been.

The overworked navigator, Igor Petrovich Akimov, also set the GPS to the wrong mode because of the high stress environment, meaning the approach was destined for failure.

The subsequent stated that it was inappropriate for the first officer to transfer the responsibility of lateral control to the navigator.

During the initial approach, the aircraft altimeter warning had gone off several times, indicating that the plane was less than 2,460 feet from the ground, reports Simple Flying.

And six seconds before the aircraft flew into the mountain, the altimeter warning activated, yet the pilots took no evasive action.

This would be the sad end for 44-year-old Evgeny Nikolaevich Nikolaev, who captained the flight, his first officer Boris Fedorovich Sudarev, the aforementioned navigator, flight engineer Anatoly Matveevich Karapetrov, 38,mfive cabin crew, two technicians and the families on board.

Families of the victims battled with the airline and the coal mining company Arktikugol and eventually received compensation.