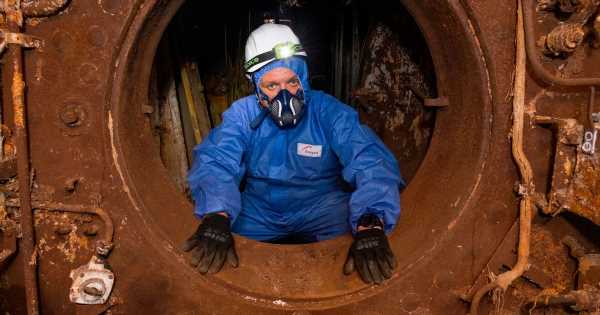 Hundreds of Nazi artefacts have been uncovered from a sunken boat off the UK coast – which included a rare Hitler death memo.

The items, which ranged from Nazi cigarettes to a large box of condoms, were found in U-boat 534 in Merseyside – forming part of Birkenhead's U-Boat story.

An enigma decoded message, which would have been used to inform the crew of their new führer, was also recovered, said organisation Big Heritage.

Miraculously, many of the items such as a cigarette box remained intact after staying hidden for nearly 80 years.

The U-boat 534 was sunk by the RAF off the coast of a Danish island on Saturday, May 5, 1945 – the same day Hitler's successor ordered the partial surrender of German forces.

The sub was raised from the seabed in 1993 and its contents were conserved, though left untouched and under wraps until now, reports Liverpool Echo.

Founder of Big Heritage, Dean Paton, said: "The things we've found go from secret documents to personal letters. One was complaining about the cows in their farm not giving them enough milk.

"We're finding photographs and cards with peoples' names on them which we can trace. It's really interesting. When they raised the U-boat in the early Nineties the Danish team rapidly conserved and saved anything they could without then going through box by box to see what it was. They just kept it safe and stabilised."

He added: "So there's all sorts of new documents now just being seen for the first time since the 40s – from some quite mundane shopping lists and letters to some quite serious stuff like enigma decoded messages informing the crew of their new führer – which, between the lines, means Hitler's dead and they've now got a new boss.

"It's the only known paper copy of that dispatch in the world.

"We have got some quite interesting technology on U 534. It was one of the later boats [made], and it didn't surrender. We think that there was probably an intention to take some of this brand new, high tech military equipment somewhere else.

"That could've been to Argentina. It had the range to get to Argentina and that is where a lot of senior Nazis disappeared to after the war, or it could've even been intended to go to America – which offered some sort of safe harbour if you brought technology that they could take, or even Japan.

"The interesting thing will be to piece this together over the next few years as more information comes to light. It's not just about the artefacts its about the story behind it that we're really piecing together for the first time."