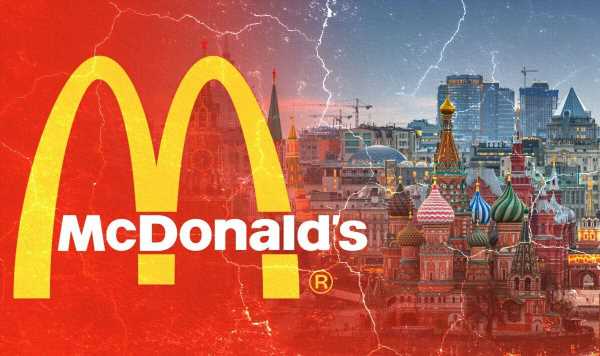 The fast-food chain restaurant said operating in Russia was “no longer tenable nor is it consistent with McDonald’s values” due to the “humanitarian crisis”. In a statement, McDonald’s also said its decision to cease operating its stores there was due to the “unpredictable operating environment” in the country.

The company is one of more than 1,000 Western companies which has ceased operations in the region following Putin’s Ukrainian invasion.

The company had initially closed its Russian operations in March, shortly after the war began.

However, it has since announced plans to sell all 850 restaurants across the country to a local buyer.

It added that the buyer will not be permitted to use the McDonald’s logo.

Chief executive Chris Kempczinski told staff and suppliers: “It is impossible to imagine the Golden Arches representing the same hope and promise that led us to enter the Russian market 32 years ago.”

The company has said that it’s committed to ensuring its Russian employees – which amounts to around 62,000 people – have “future employment with any potential buyer.”

Ian Birrell, an award-winning foreign reporter and columnist, described the exit as “a move laden with heavy symbolism”.

In a column for Unherd, he wrote: “Removal of the Golden Arches from Moscow spotlights the arrival of another Cold War between democracy and dictatorship.

“For the moment, it is focused on Russia after Putin’s atrocities in Ukraine.

“But his allies in China are looking hungrily at Taiwan as they watch this war play out — another reason why this fight is so important.”

The first McDonald’s in Russia opened its doors in January 1990, and around 34,000 burgers were sold on the first day alone.

He claims the gap left by the restaurant chain in Russia will be “rapidly filled” though, meaning residents won’t be left without their fix.

He claims the success of McDonald’s is “largely down to marketing rather than culinary finesse” and that other firms are rapidly applying to trademark names and logos.

He pointed out that a similar fast-food chain – “complete with a Golden Arches logo and little red boxes for fries” – took over a branch in Donetsk after the Russian-backed separatist takeover in 2014.

The decision taken by McDonald’s to cease trading in Russia comes after the company received considerable criticism on social media for not leaving the country entirely earlier this year.

It has become the latest in a string of Western companies that have paused, divested or withdrawn their services in Russia.

They join the ranks of recognisable brands including Apple, Disney, Netflix, and Starbucks.

McDonald’s closure in Russia will reduce its revenue by 9 percent.

The fast-food restaurants in Ukraine remain closed while Putin’s onslaught on the region continues, but the company pays continues to pay full salaries to its employees.