Netanyahu’s coalition has to secure support of nationalist Yisrael Beiteinu faction by midnight, or face another vote. 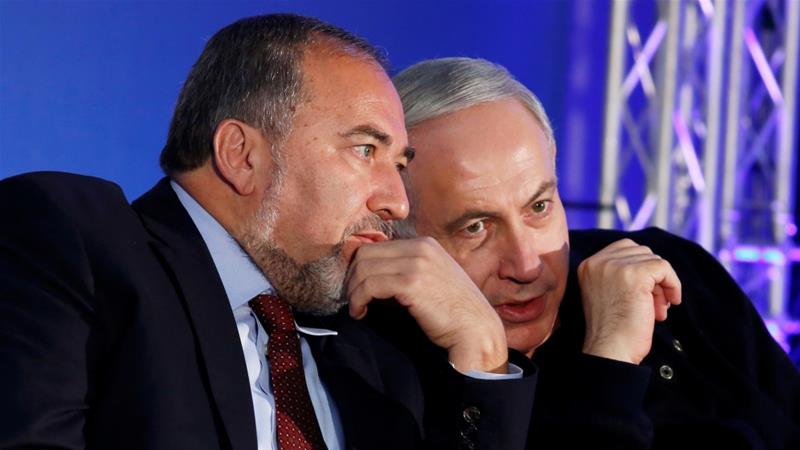 Israel’s political elite is racing against time to form a new government through high-stakes backchannel negotiations before a midnight deadline.

Prime Minister Benjamin Netanyahu’s right-wing coalition has to secure the support of Avigdor Lieberman’s nationalist Yisrael Beiteinu faction on Wednesday or face an unprecedented second election of the year.

Netanyahu’s Likud and its right wing and religious allies won a total of 60 seats in April 9 elections in the 120-seat parliament in the polls.

Without Yisrael Beiteinu’s five seats, Netanyahu has no parliamentary majority and will not be able to form a government.

The crisis hinges on Lieberman’s demand that current legislation mandating young ultra-Orthodox men be drafted into the military, like most other Jewish males, run its course.

“We are not looking to bring down Netanyahu and we are not looking for an alternative candidate, but we will not give up our principles and promises to the citizens of the state of Israel,” Lieberman wrote on his Facebook page on Tuesday.

The issue is highly sensitive in Israel and the legislation is opposed by ultra-Orthodox parties, who control 16 seats in parliament and are set to become a key member of Netanyahu’s coalition.

Netanyahu said in an address late on Monday that Lieberman was being unreasonable and that there was “no reason to drag the country to unnecessary elections that will cost a fortune and paralyse us all for another half a year”.

Failing to reach a coalition deal would be a major setback for the prime minister.

The stakes are especially high with Netanyahu facing possible indictment for corruption in the months ahead.

There have been reports that Netanyahu is seeking legislation in the new parliament that would result in him receiving immunity from prosecution, and new elections would delay those efforts and may make it impossible.

He also faces the risk of Israeli President Reuven Rivlin opting to give the task of forming a new government to someone other than him.

Late on Tuesday, a parliamentary committee approved the wording of the bill to dissolve itself and hold new elections, the Knesset said in a statement, with the two further votes needed to finalise it scheduled to take place on Wednesday afternoon.

The two men have been both allies and rivals for much of their political careers, with Lieberman serving as head of the prime minister’s office during a part of Netanyahu’s first term beginning in 1996.

He later broke away from the Likud to form his own party, which relies in large part on votes from Israelis who, like him, have roots in the former Soviet Union.

Lieberman has served in a range of ministerial positions under Netanyahu and other Israeli leaders.