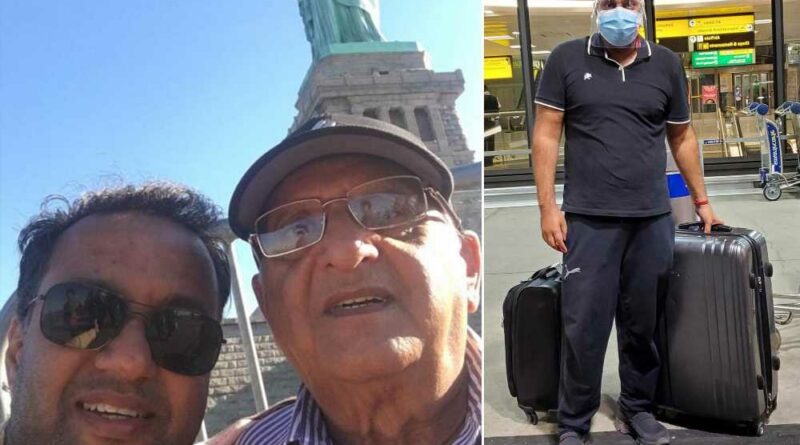 A New Jersey man who was stranded in India after traveling to care for his coronavirus-stricken father has been reunited with his family, his relieved wife told The Post.

Ashu Mahajan, 43, landed 4 a.m. Sunday at Newark Liberty International Airport. His wife, Neha, said she let out a huge “sigh of relief” upon seeing him for the first time since he left the family’s Scotch Plains home on April 17 to care for his 75-year-old father in New Delhi.

“Unbelievable,” Neha said of the jolt she got during the reunion. “I had to pinch myself to believe that he was here. With all the uncertainty going around, it’s nothing short of a miracle.”

Ashu, the director of product development for a New York City-based software company, has been living in the US with his wife since 2008 on an H1-B work visa, which allows employers to assign foreign workers in specialty occupations.

But after flying to India to help with his dad, Ashu needed to get a stamp on his paperwork at the US Consulate in India to return home.

Then a virus surge in the country killed his father on April 21, and prompted the US Embassy there to cancel all routine visa appointments.

“I knew it was going to be an issue, but all of a sudden, the pandemic really hit India hard and I didn’t imagine it was going to be this difficult,” Ashu said Tuesday. “I was seeing everything go downhill. I lost my dad, I was away from my family.”

A reporter then alerted Sen. Bob Menendez’s office to Ashu’s plight and staffers began expediting his safe return home, the New Jersey lawmaker said Monday at a press conference with the family.

The couple’s youngest daughter, 9-year-old Aisha, is an American citizen, which factored into the State Department’s consideration of expediting Ashu’s case, Menendez said.

“Having the family separated for so long would not only be a tremendous hardship – it would jeopardize the very job that makes Ashu’s H1-B status and his family’s life here in America possible,” Menendez said.

“[My staff] reached out to the State Department. They made clear all that was at stake in this case, and they successfully secured an expedited appointment at our embassy in New Delhi so that he could get that passport stamp and board a plane back to America.”

Ashu’s visa is now valid through early next year, but he would need to go through the process again if he leaves the country afterward, his wife said.

“Sadly, that’s how it goes with the indefinite backlog, we have to get stamped until we become permanent legal residents,” Neha Mahajan said. “It’s a never-ending loop until we get our legal permanent residency. It can happen again.”

Four years after legally immigrating to the US, the couple qualified to apply for green cards, but they’re still awaiting the permanent legal residency status nearly a decade later.

“I’ve been in this limbo for the past 13 years and I don’t know how much longer it will be,” Ashu Mahajan told The Post. “But I believe in the US democratic system. Even though I’m an immigrant my problems were heard and that’s what makes America great. This is why America is America.”

A State Department spokesman told The Post earlier this month that all routine visa appointments at the US Embassy in New Delhi and the consulates in Chennai, Hyderabad, Kolkata, and Mumbai were canceled until further notice.

A spokesperson said emergency services for US citizens in India are continuing, NorthJersey.com reported Monday.