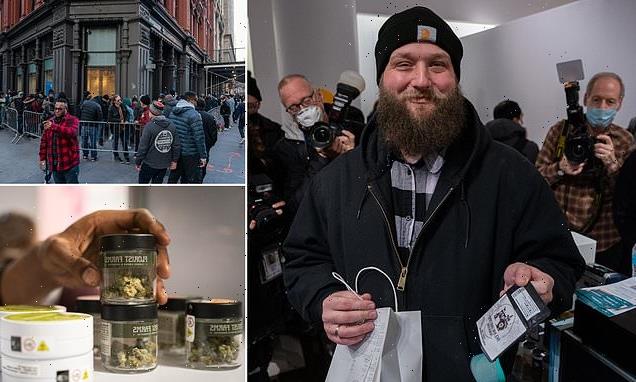 New York City opened its first legal dispensary in the city at 4.20pm on Thursday as Mayor Eric Adams claimed it is a ‘promising step.’

Housing Works Cannabis Co. in lower Manhattan sold the first order of legal cannabis in the state since recreational weed was legalized in 2021 for residents aged 21 and over.

Legal marijuana sales throughout the state are estimated to result in $1.3 billion, and the state is offering the first 150 licenses for the legal sale to people – and their relatives – who have been previously convicted of dealing or selling the drug.

‘Today marks a major milestone in our efforts to create the most equitable cannabis industry in the nation,’ Adams wrote in a statement. 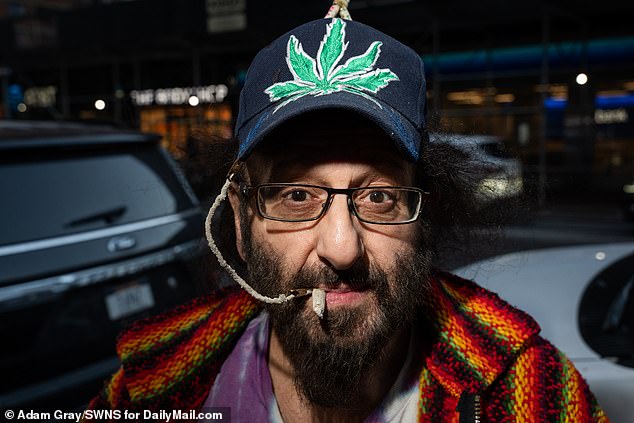 Housing Works Cannabis Co. opened in lower Manhattan on Thursday. Kenneth Woodin (above) was the first customer to buy marijuana from the store when it opened at 4.20pm 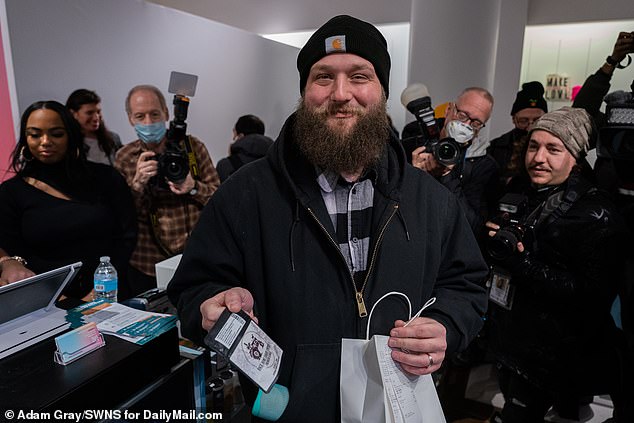 The new dispensary is operated by the nonprofit Housing Works – a minority social-service agency that helps those with AIDS and HIV, and those who were formerly incarcerated or homeless.

‘We’re absolutely thrilled to be the first and hopefully setting a model that other folks will have to follow,’ Charles King, CEO of Housing Works said.

King raved about the location in the East Village area being close to New York University – which is a tourist hot spot.

‘This location is a perfect location,’ he said. ‘We’re between the West Village, the East Village. Tourists can come by here easily. So we think we’re going to bring up a lot of sales here.’

The company has received about 2,000 reservations to make purchases with a line  seen outside the dispensary turning the corner.

King said that his nonprofit is hiring people who have been criminalized because of marijuana.

‘Housing Works pursued getting a license because they wanted ‘to have the opportunity to ameliorate some of the harsh circumstances implicated in both the criminalization of cannabis as well as other drugs,’ he said 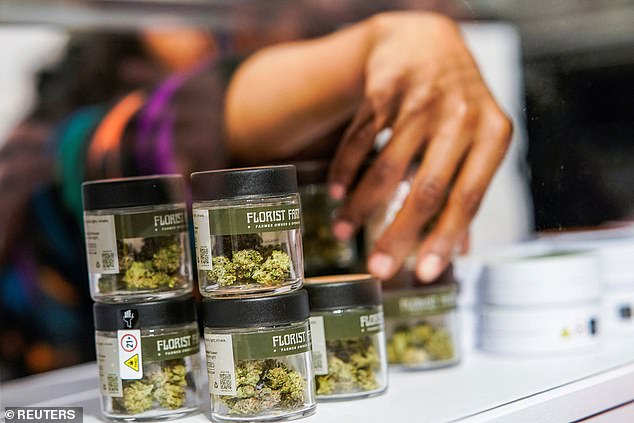 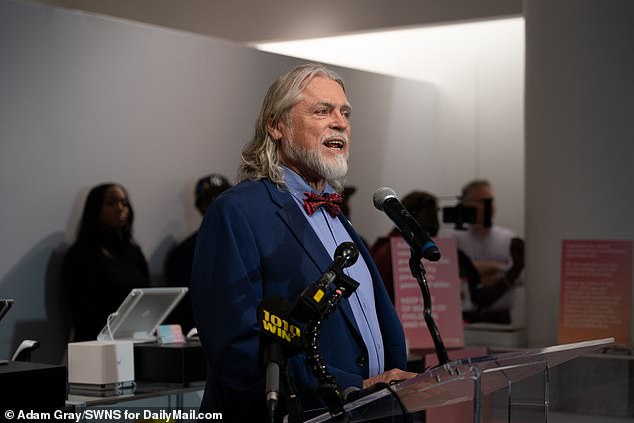 Charles King, CEO of Housing Works, is behind the opening of the new dispensary 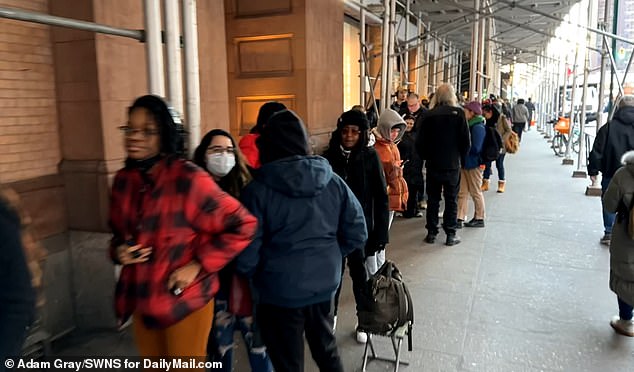 The company has received about 2,000 reservations to make purchases with a line wrapping around the building 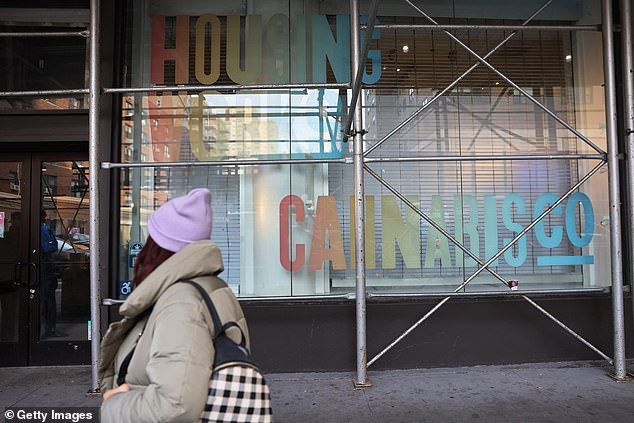 The Housing Works Cannabis Co. can be seen above before opening 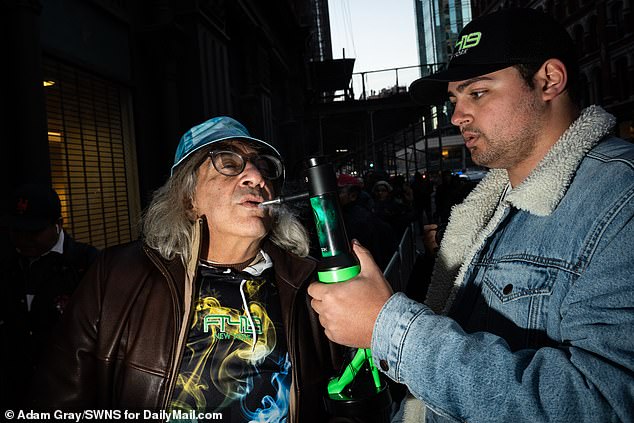 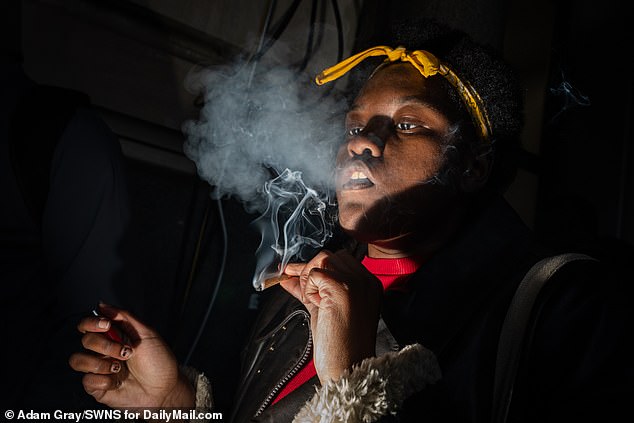 A few people were seen smoking right outside of the dispensary 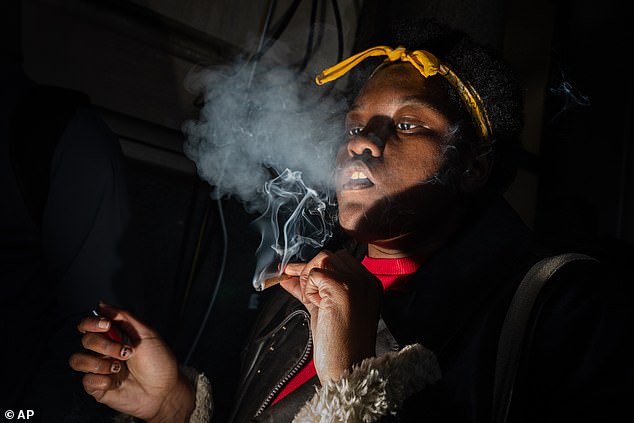 A woman freely smoked her joint while outside the store 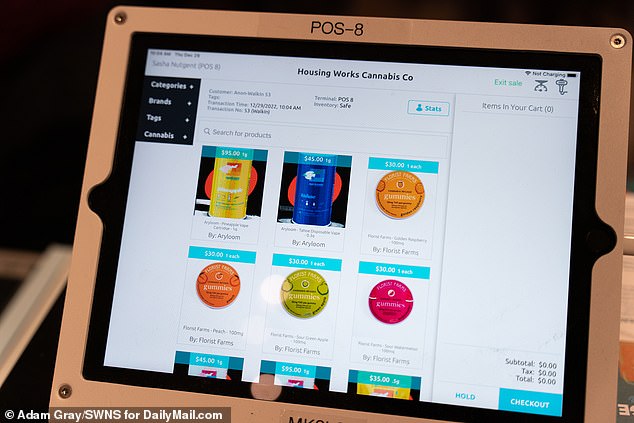 Other people wore marijuana-type shirts in support of the opening

Chris Alexander, the inaugural executive director of the state cannabis office, was the first purchaser at the dispensary and spent $96 on a tin of marijuana flowers and watermelon-flavored gummies.

‘It’s been a lot of work that’s come to get us to this point,’ Alexander said. ‘We do have a lot more work to do, a lot more stores to open.’

Alexander purchased the marijuana during the store’s press conference.

Carlina Rivera, New York City Councilmember, also bought gummies, and said she no longer needs to travel out of state for legal cannabis.

‘We are the financial center of the world, the greatest city on earth, and I think people will now come here to enjoy all types things,’ she said.

Kenneth Woodin was the first customer to buy marijuana from the store when it opened at 4.20pm.

About 36 licenses to open dispensaries have been issued with more shops anticipated to open in 2023. 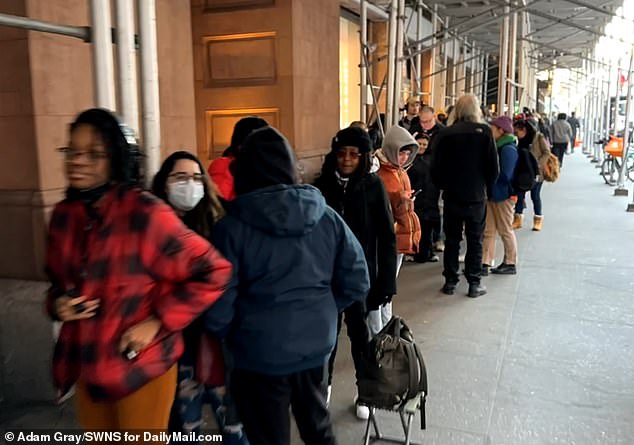 Chris Alexander, the inaugural executive director of the state cannabis office, was the first purchaser at the dispensary and spent $96

Carlina Rivera, New York City Councilmember, also bought gummies, and said she no longer needs to travel out of state for legal cannabis 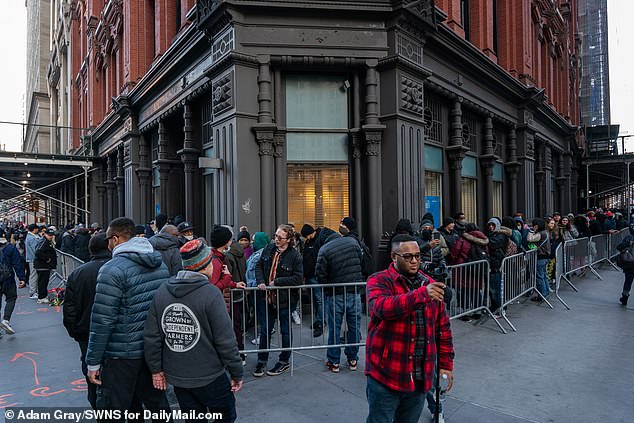 The different purchasing options were available to checkout on an ipad 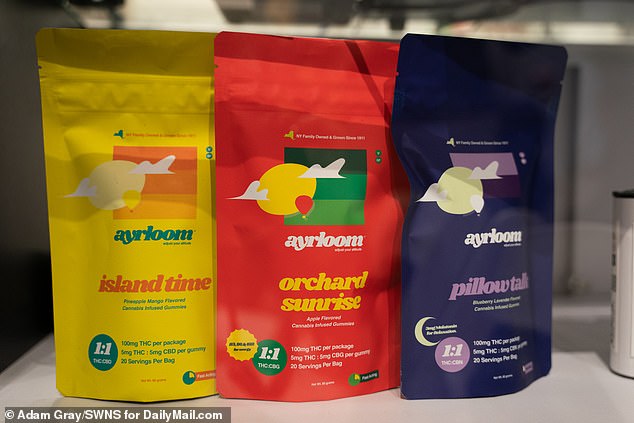 The cannabis products offered can be seen above 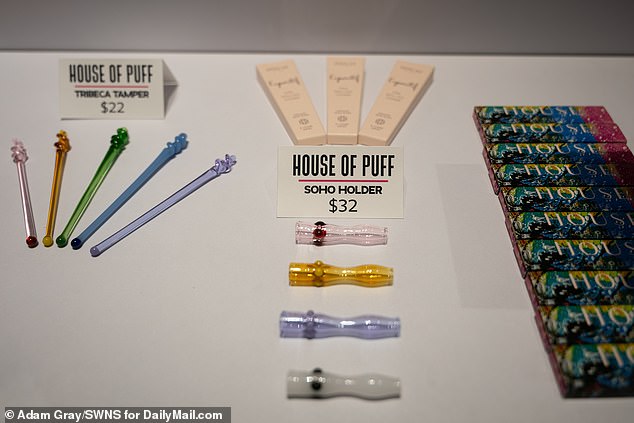 The store also had different cannabis gummies on display 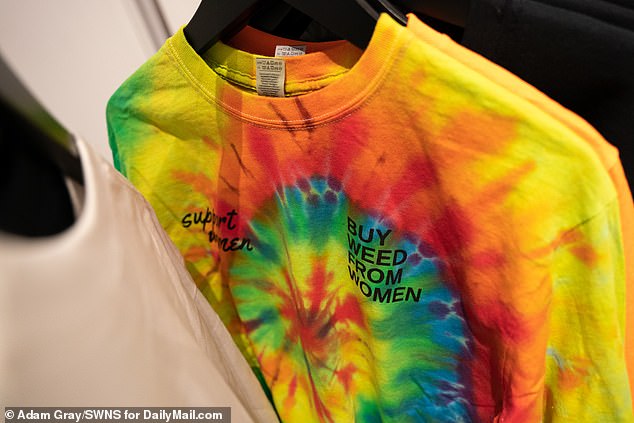 About 36 marijuana business licenses have been issued in New York 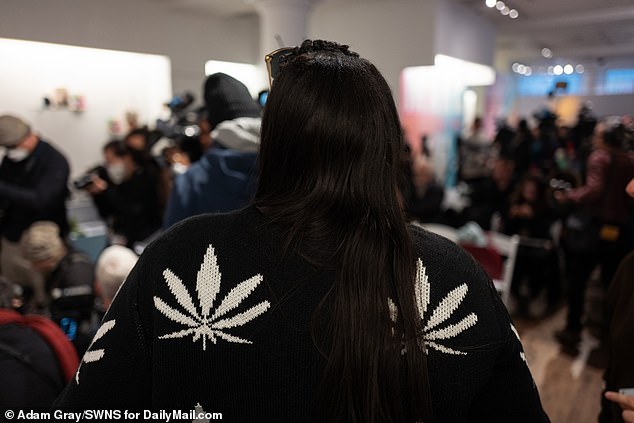 ‘Buy Weed from Women’ one t-shirt available for sale read 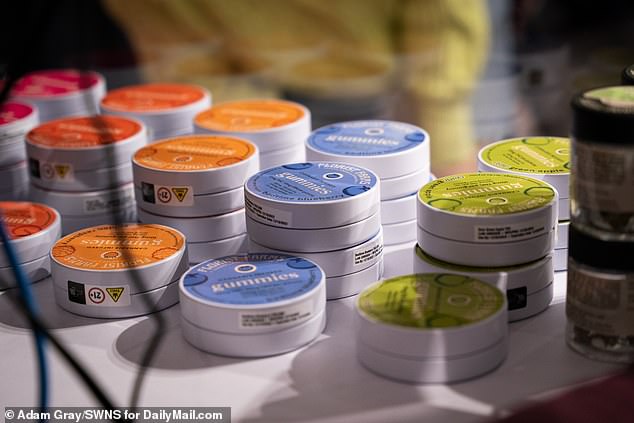 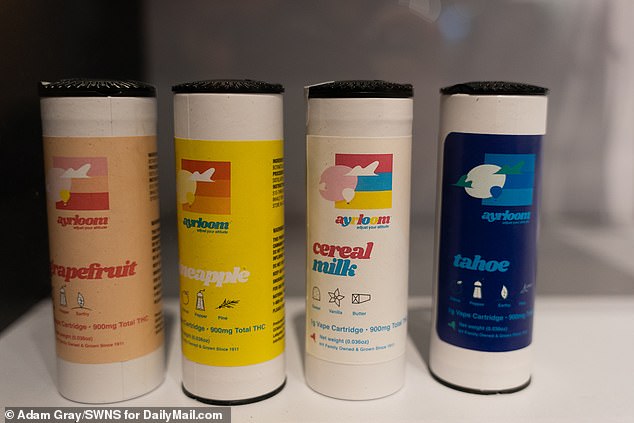 Officials sought to compensate African-American and Hispanic communities whose members were disproportionately arrested and convicted during the time weed was illegal.

Meanwhile, the Big Apple is cracking down on illegal marijuana sales. Mayor Eric Adams announced last week that 600 pounds of weed – worth about $4 million – had been confiscated in the last month.

In 2018, a state report estimated that there had been 800,000 arrests for marijuana possession in the previous 20 years. In 2017, most of those arrested were Black, 48 percent, while Hispanics made up 38 percent of arrests.

‘Prohibition denied people opportunities, it caused divestment in communities, it broke up families,’ said Tremaine Wright, chairwoman of the control board for New York’s Office of Cannabis Management.

Guerrero said that in the 2000s, the New York Police Department’s infamous stop-and-frisk policy, which disproportionately targeted people of color, meant ‘we couldn’t be outside without getting picked up by the police.

‘It was just living in a constant, constant state of surveillance and harassment,’ she recalled.