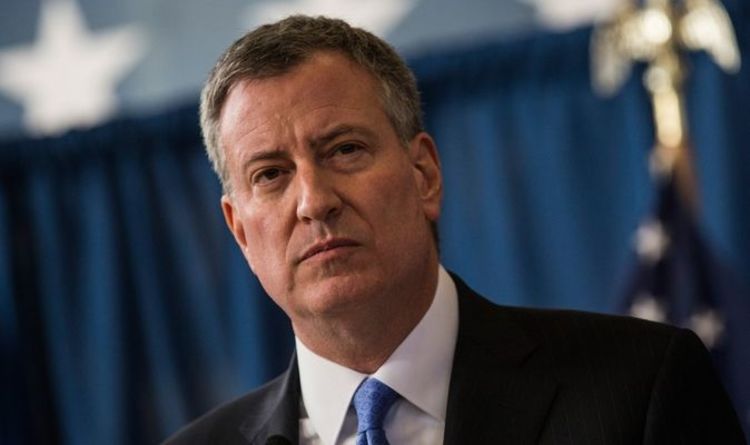 New York Mayor Bill de Blasio, 60, told US news network MSNBC private sector employees in the Big Apple will need to be inoculated with the COVID-19 vaccine if they want to return to work. The policy, which is set to be enforced from December 27, comes just months after the city brought in a public sector mandate.

Mr de Blasio, who will leave office in January after eight years as mayor, said: “We in New York City have decided to use a preemptive strike to really do something bold to stop the further growth of COVID and the dangers it’s causing to all of us.”

He added: “We’ve got Omicron as a new factor, we’ve got the colder weather which is going to really create new challenges with the Delta variant, we’ve got holiday gatherings.

“Vaccine mandates are the one thing that breaks through.”

The move towards the mandate, which is a first for an American city, is expected to affect around 184,000 businesses in the Big Apple.

But New York and the city’s surrounding region has so far detected ten cases of the Omicron variant.

Around 69 percent of New Yorkers are fully inoculated while 60 percent of the overall US population have received two doses.

“This would be my advice to mayors, governors, CEOs all over the country – use these vaccine mandates,” he said.

But New York City Council’s Republican Minority Leader Joe Borelli, 39, took to social media to reveal he would launch a legal challenge against the vaccine mandate.

Writing on Twitter, Mr Borelli added: “In the Bronx, with 15 percent unemployment, 28 percent of residents will no longer be able to work on December 27, including 44 percent of black young adults, as a result of de Blasio’s vaccine mandate for the private sector.”

Mr Borelli’s comments came as more than 200 GOP representatives in the House co-sponsored a resolution to halt a national vaccine mandate.

But Democratic West Virginia Senator Joe Manchin, 74, also suggested he would oppose such a move.

US President Joe Biden, 79, has also faced opposition to a vaccine mandate in the courts.