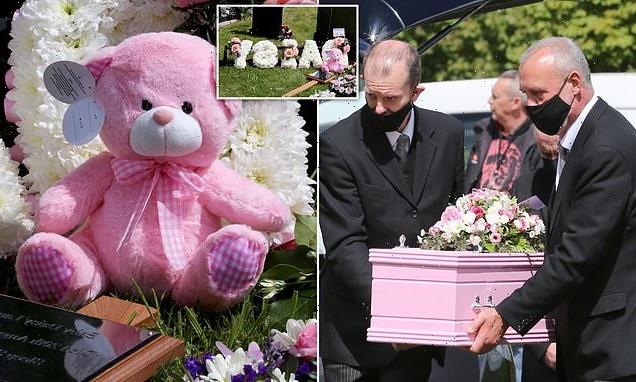 A newborn baby girl whose body was found wrapped in towel at a recycling centre was laid to rest in a pink coffin today – as her mother is still untraced eight months on.

The newborn’s body was found at the Bowling Back Lane Household Waste Recycling Centre in Bradford, West Yorkshire, in August last year.

A funeral for the infant – named Daisy – was carried out at Bradford Cathedral in a service arranged by the council, who said ‘the city considers her one of our own’.

Daisy was buried in a tiny pink coffin, along with a teddy bear made out of the hi-vis jacket of one of the workers who found her – and named her. 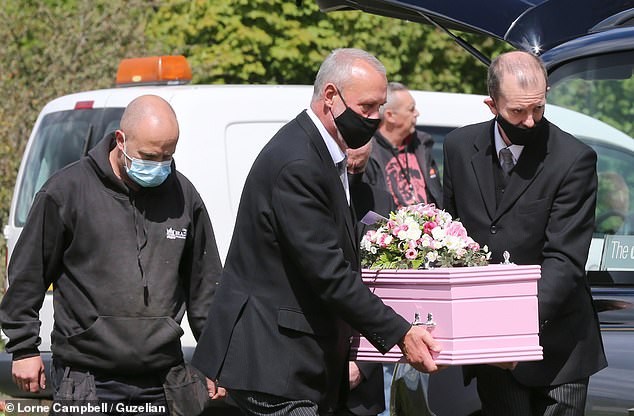 The burial of Daisy, the name given to the newborn baby who was found wrapped in a pink beach towel at Bowling Back Lane in Bradford, West Yorkshire, on 20 August 2020 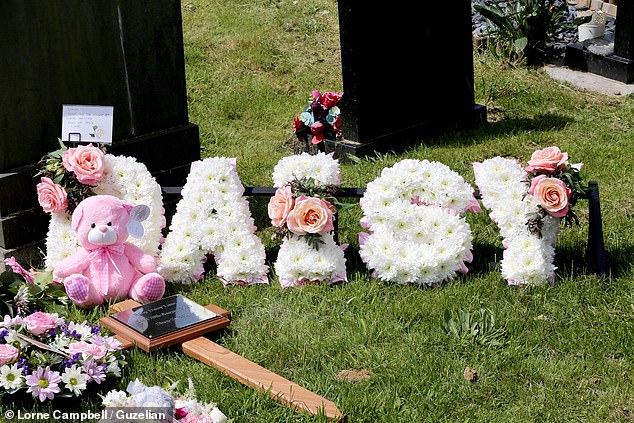 It is thought the baby was a stillborn and possibly a concealed pregnancy as she was not born in a hospital setting. Pictured: Flowers by Daisy’s grave at Bradford’s Bowling Cemetery

The infant’s mother has still not come forward after a series of appeals, with concerns for her welfare mounting.

Daisy was found wrapped in a purple beach towel which featured the map of the Spanish island of Fuerteventura in yellow along with small images of fish, sea horses and a palm tree.

Police believe the towel could be key to finding the mother, who is likely from the Bradford area.

It is thought the baby was a stillborn and possibly a concealed pregnancy as she was not born in a hospital setting.

Laura Pratt, 26, – the partner of Lionel Mairs, 31, who was one of the crew who found the newborn – designed the hi-vis bear for Daisy to be buried with from her partner’s work uniform so that ‘they will always be with her and she won’t be on her own’, she told The Sun. 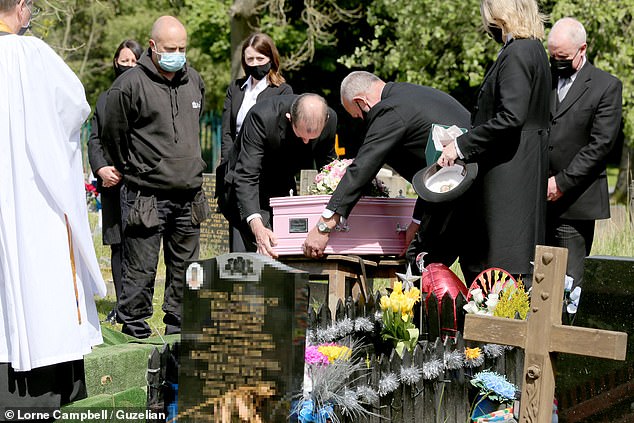 The mother of the baby has never come forward. The funeral was held at Bradford Cathedral , followed by burial at the city’s Bowling Cemetery 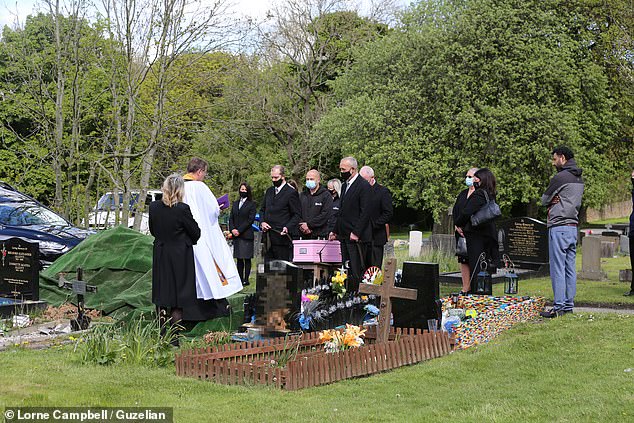 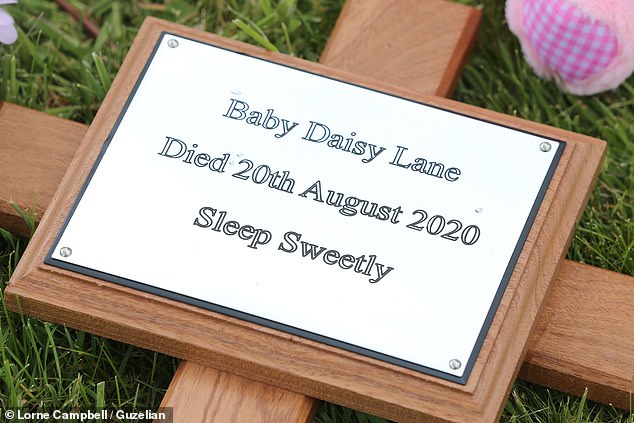 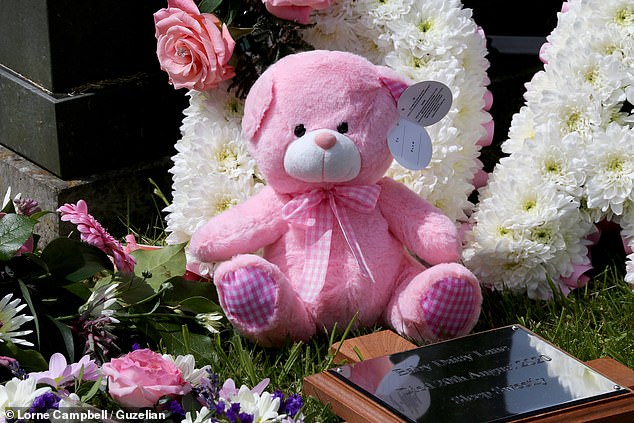 Bradford Council chief executive Kersten England said: ‘Our thoughts and prayers go out to the mother’

Ms Pratt added that Mr Mairs had been ‘devastated’ by the discovery of the baby’s body and that having the bear made has ‘brought all the team comfort knowing that Daisy will have this bear with her’, she told the publication.

Craftswoman Tarah Finlay, from Leeds, told The Sun that she was ‘heartbroken’ over Daisy’s death and had made the orange hi-vis bear for her in a couple of days after being contacted for help before the funeral. 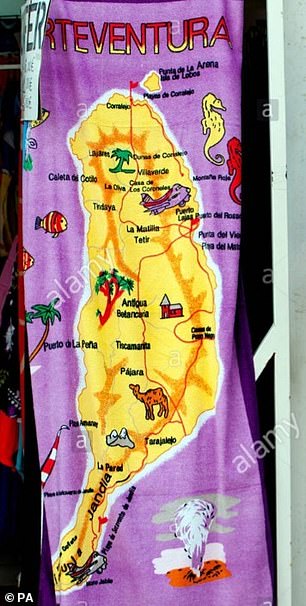 Daisy was found wrapped in a purple beach towel which featured the map of the Spanish island of Fuerteventura in yellow along with small images of fish, sea horses and a palm tree

Bradford Council said the service – for all faiths – was attended by staff from the recycling service as well as representatives from the police.

The service was conducted by Reverend Canon Paul Maybury, of Bradford Cathedral.

Ahead of the service Canon Maybury said: ‘I will lead prayers for the baby, her family, and all affected by her short life.

‘These prayers will be addressed to God, who knows all the circumstances that we do not know and is able to bring comfort to all who grieve.’

The noon funeral service was followed by a burial at Bowling Cemetery an hour later.

Leader of Bradford Council Susan Hinchcliffe said: ‘We thought that this was the least we could do to make sure the little girl, whose physical existence was so fleeting on this planet, will have the opportunity to live on in our memories with this service.

‘We may not know who her natural family is, but all of us in Bradford district are now her family.

‘Having a funeral service organised by the council demonstrates that the city considers her one of our own. We are all so sorry that she has been lost to us.’ 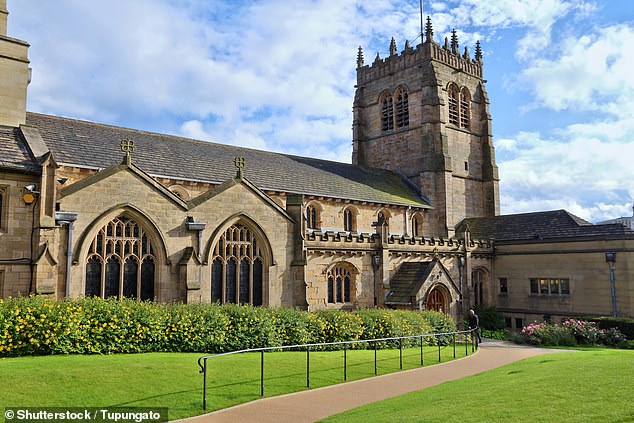 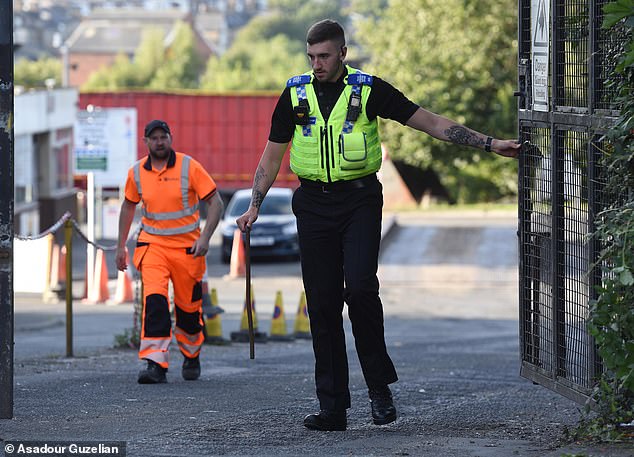 A police officer at the household recycling centre in Bowling Back Lane, Bradford, West Yorkshire, where the body of a newborn baby was found in August 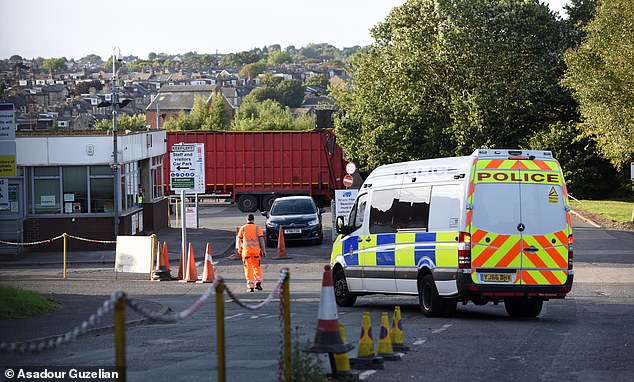 Bradford Council chief executive Kersten England said: ‘Our thoughts and prayers go out to the mother and we hope she receives solace from our efforts to provide the most compassionate service for her daughter.

‘We want her to know that she too has not been forgotten and we would encourage her to come forward to get help with her bereavement so she does not have to face it alone.’