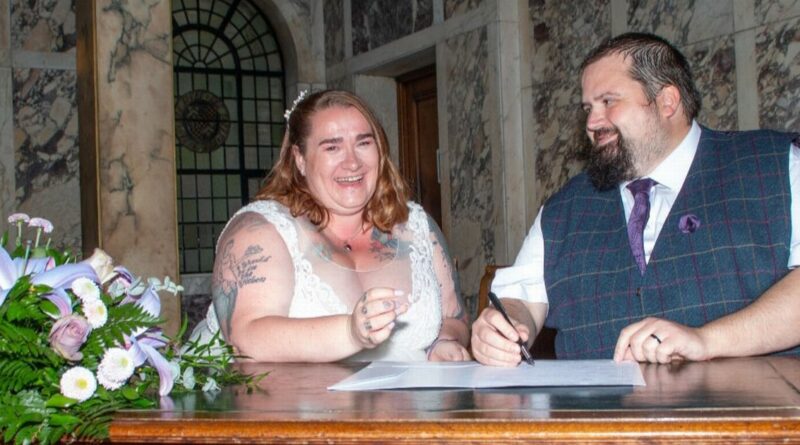 A mum's world was turned upside down after she was told she had stage four breast cancer whilst her husband was suffering from a blood clot – shortly after the pair had overcome their battle with Covid-19.

Lucy Canavan, 36, and her husband Jonathan Canavan, 38, were left "devastated" after they were told by hospital staff that their wedding reception wasn't "doable" because Lucy would need to undergo gruelling treatment.

The mum, who shares three children with Jon, said the pair thought they were out of the woods after they had overcome the virus — until she was met with a devastating diagnosis in June.

"After many scans and appointments that diagnosis soon turned to a stage four breast cancer which spread to the liver," Lucy told the Daily Star.

"It's something I still have trouble getting my head around as apart from the lumps I found (three in total), I've never had any symptoms and up until treatment have never felt sick."

The couple, who have been together for 19 years, had only just finished celebrating their nuptials in August when Jon had developed a blood clot on his right lung.

"He was told that the blood clot was a possible side effect of covid," Lucy said.

She added: "We hope he returns to work soon as Christmas is coming and living off SSP just isn't doable. From a money standpoint, things have become increasingly tight."

Speaking about their wedding day, she added: "After the diagnosis, I was determined to have the wedding reception and just make it one big last party before treatment started.

"The hospital I was under at the time told me the reception and at one point even the wedding wasn't doable as I would be in treatment. Which in the end wasn't the case – I feel like it was stolen from us.

"Finally marrying my partner of 19 years was the best day ever, [I] never thought we'd ever get married it was just amazing despite everything."

She added: "Once you get a stage four diagnosis it's difficult to even pinpoint a feeling.

"You're consumed by all the feelings. My main concern since day one was my children, so we try to keep things as normal as possible.

"I have good days and bad days. Days where I tell myself I've got this and days where all the worst-case scenarios play over and over again in my head."

But the brave healthcare worker says she has managed to balance her appointments with her home life.

"On treatment days I drop the children off at school, go to the hospital for chemotherapy, and done in time to go and pick them up," she said.

"When I can I'm still working, working part-time for NHS 119 covid booking service the further on in treatment I go it is becoming more difficult.

"Not only physically but mentally as well. But for as long as I'm capable to work I will. I like helping people, I enjoy my job and I've never not worked, I couldn't imagine not working."

The mum-of-three has since launched a fundraising page to help create "some memories" with her family which she says would mean "everything" to them.

She said: "We've both always worked and while we might not have a lot, everything we have we've worked for.

"My prognosis with stage four is two to three years but people are living longer so I'm hopeful."

She added: "I want to leave them with something when I'm gone and not leave my husband with the mess of a funeral.

"At 36 years old I shouldn't be thinking about my funeral. I should be enjoying life and my little family.

"Even if people don't donate, we'll get by, you have to, but what I want people to take from my story is that cancer doesn't wait until 50 to strike.

"Women and men need to be checking themselves regularly.

"My doctor gave me antibiotics and told me it was nothing to worry about, which clearly is not the case ."