NFL evaluators will tell you that pro days are not to be overlooked, and Pitt QB Kenny Pickett offered scouts something to think about before he even began throwing on Monday.

Pickett has been dinged for his hand size during the NFL draft process. First he declined to have it measured at the Senior Bowl, which was odd. The reason given: Pickett is double-jointed.

Then once that silliness was over, Pickett's hands — after he underwent weeks of stretching exercises in the run-up — measured 8 1/2 inches at the NFL scouting combine. (NFL scouts had measured them at 8 1/4 inches last spring, and nine inches is generally considered the floor for some teams at quarterback.)

And now? Pickett was even bigger at the pro day, coming in at a whopping 8 5/8.

Like the old Brady Bunch episode where Bobby Brady thinks he can get taller by hanging from his swing set for extended period, we're a bit skeptical of Pickett's hand-size growth.

If he succeeds in the NFL, will that eighth of an inch really make the difference? Likely not.

It's true that smaller hands typically leads to more fumbles, especially with an NFL ball that's larger than its college cousin. And we can't overlook the fact that Pickett did fumble 38 times in his five college seasons, with six coming in his breakout 2021 season.

But Pickett, who also plays with gloves on both hands, appears to be fatigued by the subject.

[email protected] catches up with @AKinkhabwala to discuss how he thinks his Pro Day went, QB comparisons he got today, and his leadership.

Thankfully, Pickett has done enough throwing with his shrimp digits — 4,319 yards, 42 TDs, seven INTs as a Heisman Trophy finalist — to be considered one of the best QB prospects in the 2022 NFL draft. The number of big-name evaluators attending his pro day suggests he'll have several teams consider him in Round 1 this April.

Officials from every team reportedly attended the event, but it's notable to see who from which teams attended — especially those clubs still in need of QB help.

It's quite notable that four GMs attended: the Steelers' Kevin Colbert, the Panthers' Scott Fitterer, the Falcons' Terry Fontenot and the Commanders' Martin Mayhew. The Panthers also were supported by head coach Matt Rhule and offensive coordinator Ben McAdoo, and they and Fitterer each got an up-close look at the magic growing hand.

By most accounts, Pickett's 56-throw script went off without a hitch, save for a few overthrows.

It feels like the quartet of teams that sent their GMs and offensive coordinators — the Falcons, Panthers, Steelers and Commanders — have to be at or near the top of the list of the ones that could consider drafting him in Round 1. Another team with reported interest in Pickett, the Saints, sent only its QB coach.

The quarterback with whom Pickett likely is dueling for QB1 honors, Liberty's Malik Willis, has his pro day on Tuesday. Many of the same folks likely will attend that event, too.

So how much do these pro days mean in terms of splitting hairs? And will that eighth of an inch change any minds?

Let's hope not, but this is a league where strange factors can have outsized impacts. Especially when it comes to something as frivolous as the hand-size debate that few want to engage in but many feel compelled to.

The true measurement will come on April 28, when Round 1 kicks off. It can't come fast enough. 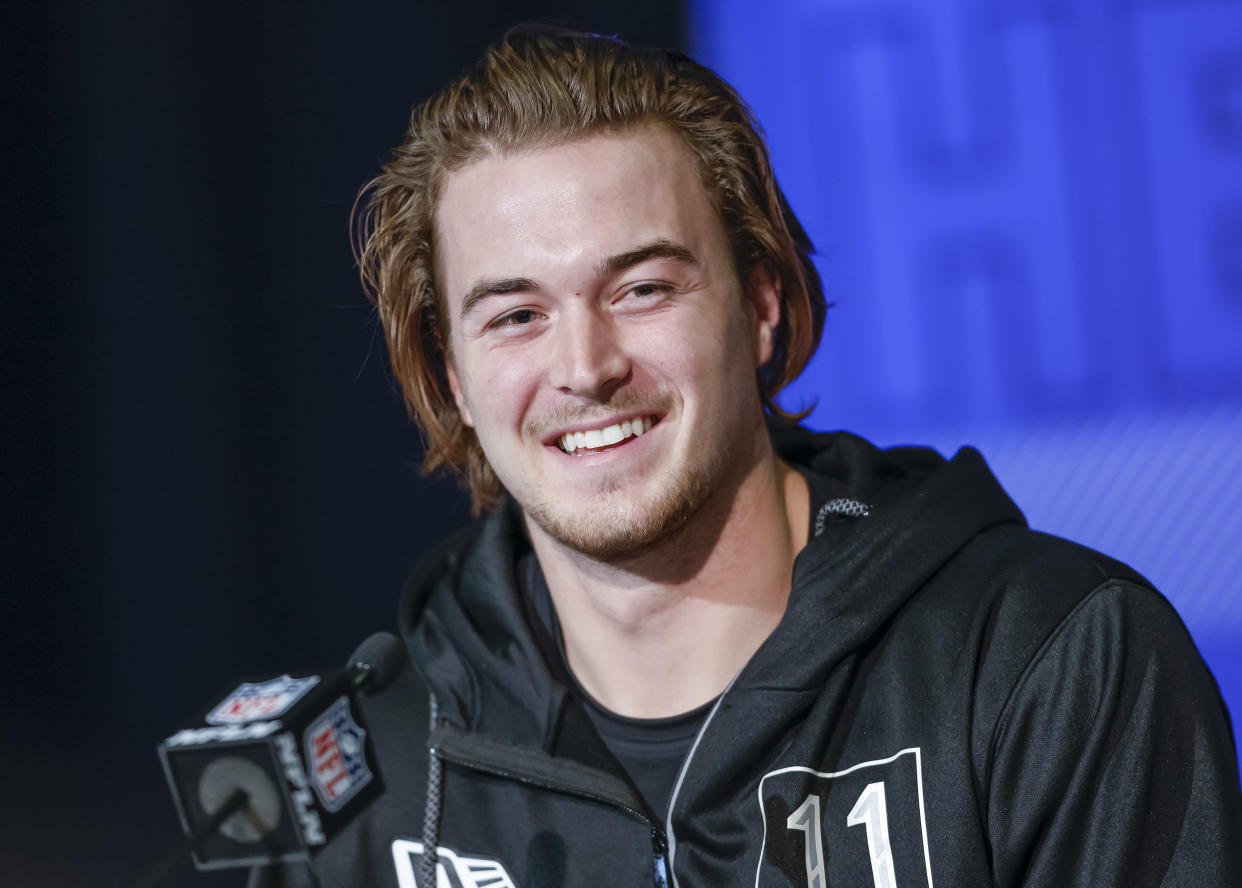