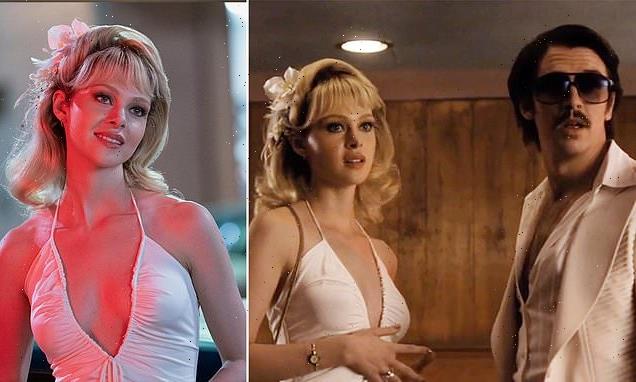 Nicola nails her six minutes of fame! There’s hope yet for Peltz-Beckham brand as Brooklyn’s better half pulls off Playboy arm candy role with aplomb… before being shot dead in Hulu mini-series

Hats are off to Brooklyn Beckham and Nicola Peltz, two mediocre nepotism babies who refuse to let anything get in the way of their dreams.

After a string of career failures and lame endeavors—first football, then modeling, photography and cookery— it seems that the Peltz-Beckham brand might survive after all, thanks in large part to Peltz’s blossoming career as sexy window dressing in Hollywood cameos.

In a blink-and-you’ll-miss-it role, Brooklyn’s better half channels Dorothy Stratten— the doomed Playboy Playmate of the Year who was murdered by her jealous husband in the Hulu mini series ‘Welcome to Chippendales.’

‘Welcome To Chippendales’ is currently airing in America, is due for release in the UK on Disney+ next month.

The eight-part docudrama charts the violent story of the famously raunchy male striptease act and its Indian founder, Steve Banerjee, another ruthless low-life who would later be convicted of paying a hitman to kill a business rival.

It might not be the most compelling of Hollywood performances, but Peltz plays the part exactly as it needs to be: sexy, wholesome, doe-eyed, girl next door.

By the end of the pilot episode, Peltz’s character is dead, but she’s left her mark on one of the most sordid stories to rock Tinseltown. 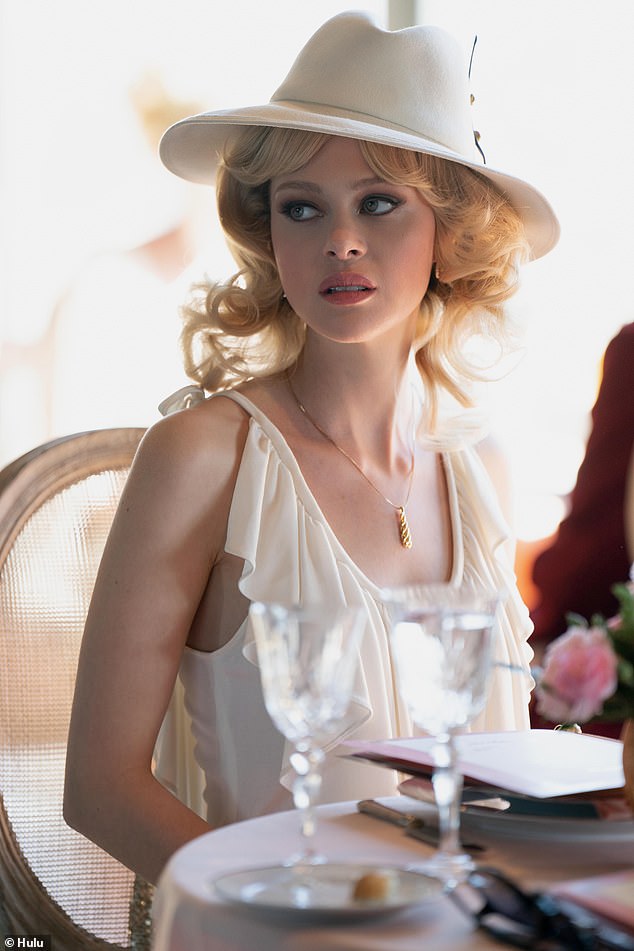 Nicola Peltz Beckham nails her role as Dorothy Stratten, the doomed Playboy Playmate of the Year who was murdered by her jealous husband in the new Hulu miniseries ‘Welcome to Chippendales’ 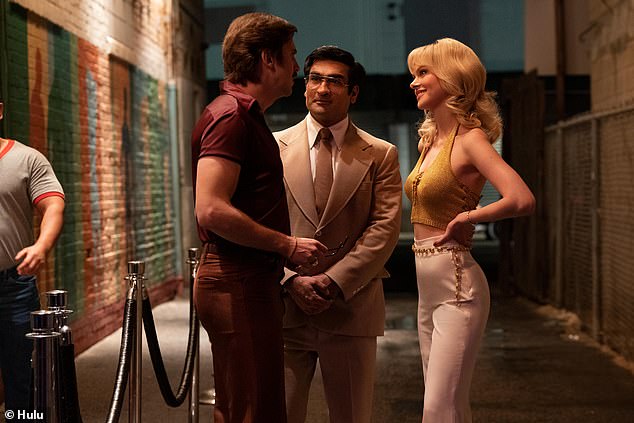 The eight part docudrama charts the violent story of the famously raunchy male striptease act and its Indian founder, Steve Banerjee, another ruthless low-life who would later be convicted of paying a hitman to kill a business rival It is 27-year-old Peltz Beckham’s first acting role since marrying Brooklyn, son of David and Victoria Beckham, in April this year 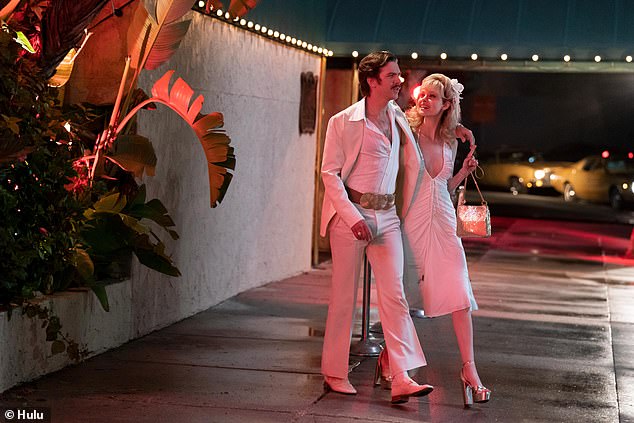 The pilot episode of ‘Welcome to Chippendales’ tells the sordid Hollywood story of how Dorothy Stratten, a Playboy model, was shot dead at the age of 20 in a jealous rage by her husband Paul Snider (played by Downton Abbey’s Dan Stevens) 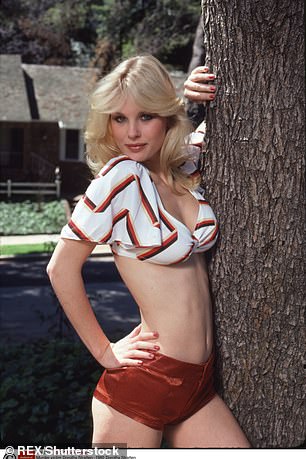 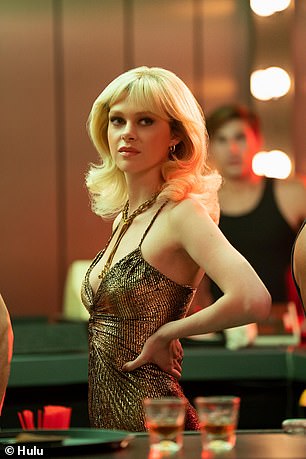 Though her talking part is small, Peltz shares an uncanny resemblance to the doomed star. She told POPSUGAR: ‘I really did every bit of research I could find, whether that be physical or just the way she spoke, the way she sounded, how she looked, just everything’

Audiences are first introduced to the billionaire heiress as Dorothy when she arrives at a mirrored West Hollywood nightclub wearing an all-white jumpsuit with brushed out blonde waves while ordering a pink squirrel cocktail alongside her boyfriend Paul Snider (played by Downton Abbey star Dan Stevens).

She doesn’t speak much, but her striking resemblance to the real Dorothy Stratten is uncanny.

And unlike her husband’s seemingly flippant attempts at finding a suitable career path, Peltz told POPSUGAR that she went to great lengths to audition for the role. ‘I really did every bit of research I could find, whether that be physical or just the way she spoke, the way she sounded, how she looked, just everything.’

Indeed, it doesn’t take much acting chops but Peltz plays her part well – smiling, hooting and hollering and looking like someone who (at the very least) is capable of appearing carefree unlike her mother-in-law whose entire modus operandi as Posh Spice was built around one steely expression.

A few scenes into the first episode, Stratten and Paul are cutting loose on the dance floor of a gay club where they first get the idea to start Chippendales.

‘Take it off!’ she shouts at one of the half-nude go-go dancers.

Immediately after the nightclub scene, Peltz delivers a few poignant lines – albeit lifelessly – while trying to convince her husband Paul and Steve Banerjee of starting a ‘strip club for women.’

She proceeds to school them in feminism: ‘Now with the whole sexual revolution thing it’s all coming out: Erica Jong, Deep Throat, the pill…’ Peltz languidly recites with the same with the same enthusiasm one would rattle off a shopping list.

As one film critic noted, ‘Based on this line reading, you can tell she [Peltz] knows exactly what 1.5 of those things are.’

Snider was Banerjee’s business partner and actually dreamt up the male strippers idea while Stratten suggested they wore the same skimpy outfits — collars, cuffs and bow ties — that she’d worn as a Playboy Bunny (pictured above) 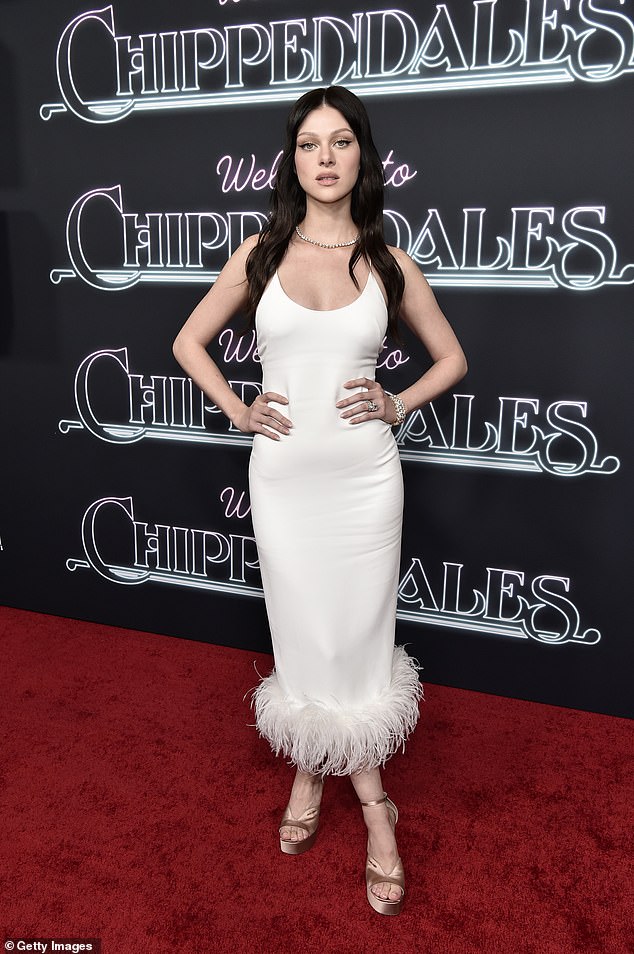 Peltz’s cameo in the Hulu docudrama follows a short series of iconic roles in films like ‘Transformers: Age of Extinction’ and the 2020 Netflix Christmas flick ‘Holidate.’ Pictured above on the red carpet for ‘Welcome to Chippendales’

Again, it is not the most inspired performance but Peltz gets the job done.

And can you blame her? The billionaire heiress and her husband have become the poster children for the next generation of famous offspring playing dress up with careers in everything from artist to actor. In addition to the safety net of enormous wealth, they are also gifted with unmerited confidence.

Lest we forget some of Brooklyn’s more notable flops. Like his short-lived career as a photographer that was slammed as a pointless ‘vanity project’ when he published a glossy book of snapshots. One infamous picture was the blurry silhouette of an elephant alongside the words: ‘Elephants in Kenya — so hard to photograph, but incredible to see.’ (Depth has never been his strong suit).

Most recently, he’s declared himself to be a chef, which was also round mocked when it was made public that it cost $100,000 and 62 people to produce one eight-minute episode of him cooking a sandwich where he asked for assistance in cooking hash browns.

In her penultimate scene as Dorothy Stratten, Peltz gets approached by the legendary Hollywood director, Peter Bogdanovich, to audition for his upcoming movie.

‘I would love to read,’ she responds in a line that feels like it was written to make her purposely sound dimwitted.

Upon returning to the table, Dorothy should be eager to tell Paul the good news, but instead Peltz deadpans with the same lackluster conviction: ‘Oh my god. Oh my god. He just asked me to read for a part in his new movie.’

Coming off Academy Award winning success of ‘The Last Picture Show’ – one would hope that an actor approached by Peter Bogdanovich in the late 1970s would have shown a little more enthusiasm.

Needless to say, when it comes to playing the role of arm candy for a possessive husband, Peltz nails the part but also fails in understanding the historical context of her lines.

The episode ends with the lurid blood soaked crime scene of Dorothy Stratten’s slaying in a grisly murder-suicide plot perpetrated by her husband Paul Snider.

In the end, Peltz shows up for the part and explained to POPSUGAR that she felt a connection to Stratten: ‘I think that people may have looked at Dorothy a certain way because of the way she talked or looked or what she wore and maybe not taken her seriously, so I can relate to that.

‘I am so honored that I got the chance to play Dorothy, and I really hope that people like my performance because I love her so much,’ she adds. ‘I hope I did her justice…There’s just certain people who walk in a room and they bring light, they have an inner light to them, and I really hope that I got that across because I just want people to know how lovely she was.’ 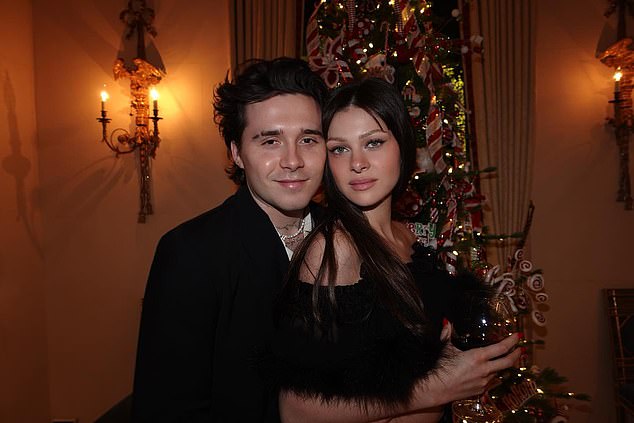 Lovebirds: Brooklyn took to Instagram to share a slew of loved up snaps with wife Nicola as they enjoyed a lavish meal together on Christmas Eve. It was the first year that Brooklyn spent the holiday season away from his family in London, after the alleged fallout with his mother 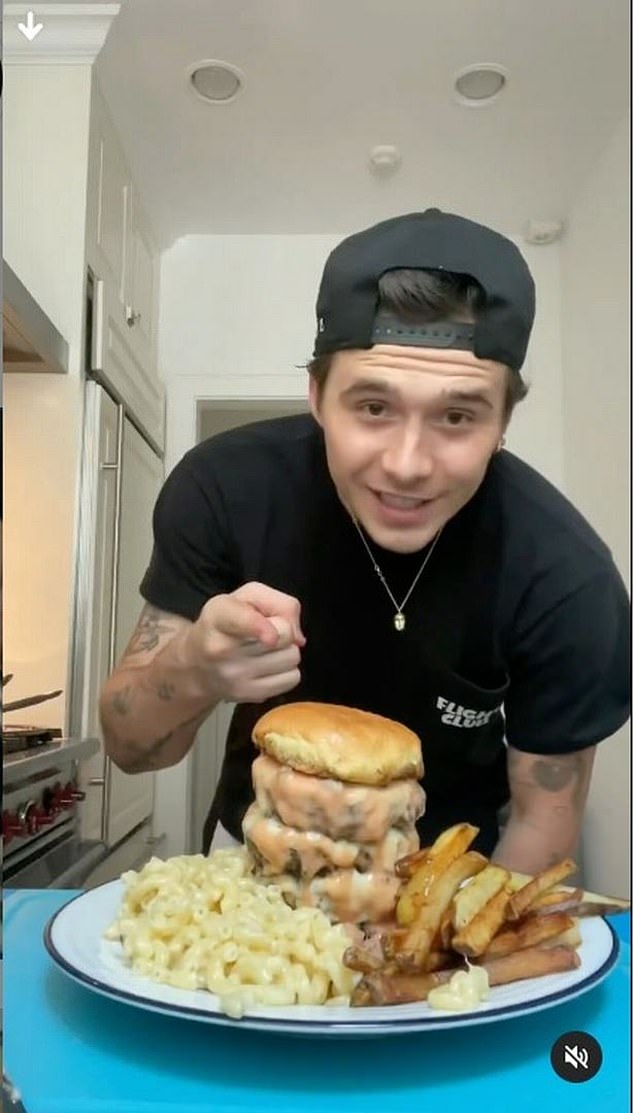 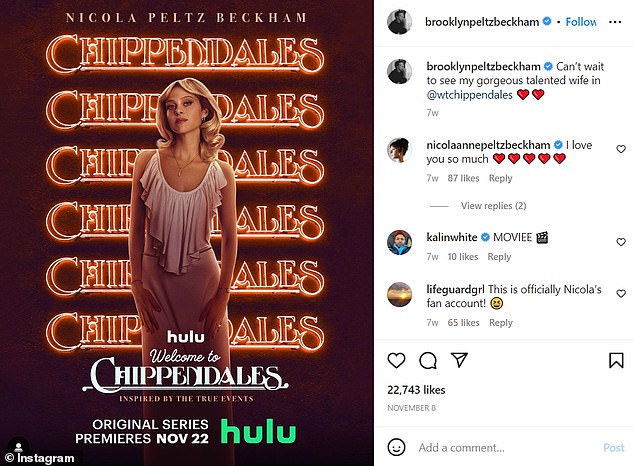 Beckham showed support for his wife’s bourgeoning Hollywood career on Instagram with a snap from the Chippendales red carpet premiere, ‘I could not be more proud of you…my talented girl.’

Meanwhile the couple was spotted in good spirits arriving in Mexico today, alongside Selena Gomez to ring in the New Year after spending Christmas away from his family.

This year was the first that Brooklyn didn’t spend the festive period with the rest of the Beckham brood, who were at home in London.

Reaching out to her eldest son via social media, Victoria penned that she missed him while sharing a picture of the rest of the family. At the same time, Brooklyn shared a slew of loved up snaps with Nicola as they enjoyed a lavish meal together on Christmas Eve.

The budding chef was celebrating the season with the actress’ billionaire parents in Palm Beach, Florida.

Beckham captioned the snaps: ‘Merry Christmas Eve from me and my baby.’

The heiress is the one of Nelson Peltz’s 10 children. Her mother, Claudia, a former fashion model, is his third wife.

The couple reside in a 27-bedroom mansion in Bedford, New York, which is a favorite among celebrities such as Ryan Reynolds, Blake Lively and Bruce Willis. 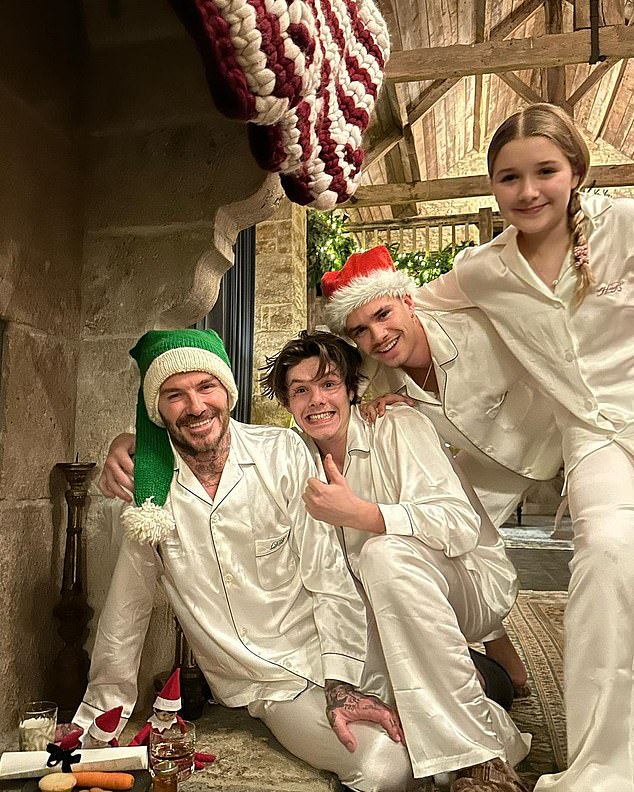 Someone’s missing: Back in London, Brooklyn’s mother Victoria shared a series of Instagram snaps of the rest of the Beckham brood celebrating Christmas, adding she ‘missed’ her son 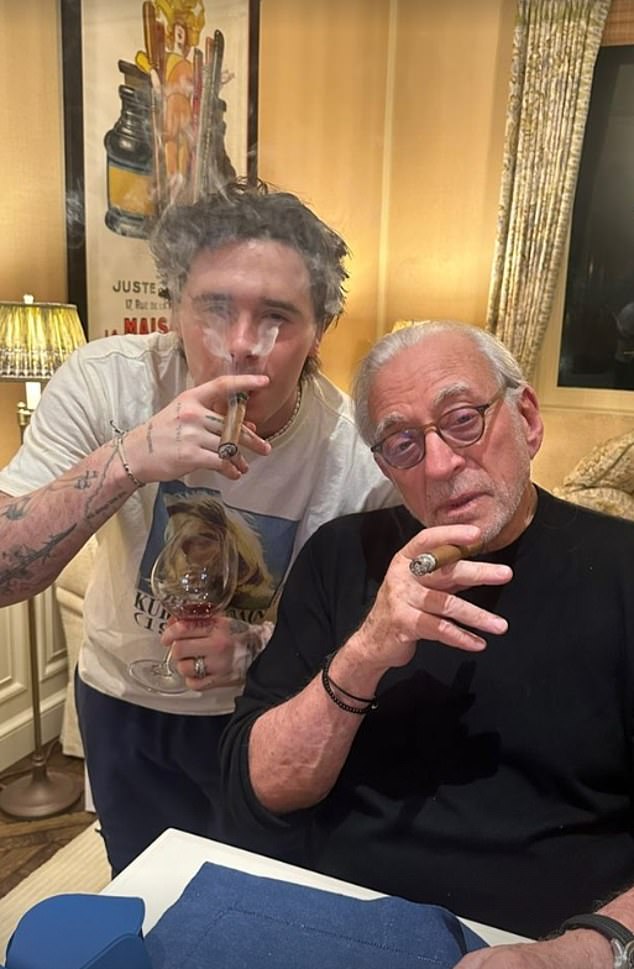 Brooklyn Beckham enjoyed a cigar with his wife Nicola Peltz’s billionaire investor father Nelson as they celebrated Hanukkah together, in the first year apart from his family amid fallout 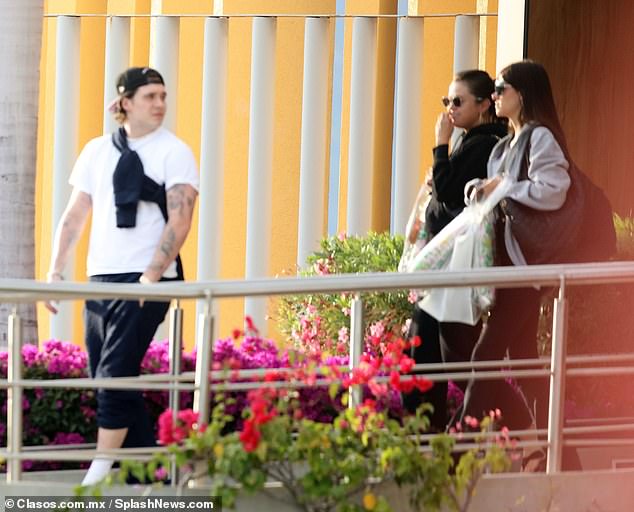 Brooklyn Beckham, his wife Nicola Peltz, and Selena Gomez arrived at a private airport in Los Cabos, Mexico today to ring in the New Year together. The group has recently become close friends and even celebrated Thanksgiving dinner together in November

It comes after months of alleged frosty tension between the Peltzs and the Beckhams following reports that claimed Nicola and Victoria, 48, ‘can’t stand each other and don’t talk.’

Back in October, Nicola once again addressed her rumored ‘feud’ with mother-in-law Victoria in an interview with The Times.

The star, who previously confirmed that the rumors had begun after she didn’t wear Victoria’s wedding dress design when she tied the knot with Brooklyn, doubled down on the claims.

But she denied that the frosty tensions were a ‘feud’ and explained that the Victoria’s atelier simply hadn’t had time to make the dress, as she insisted: ‘No family is perfect.’