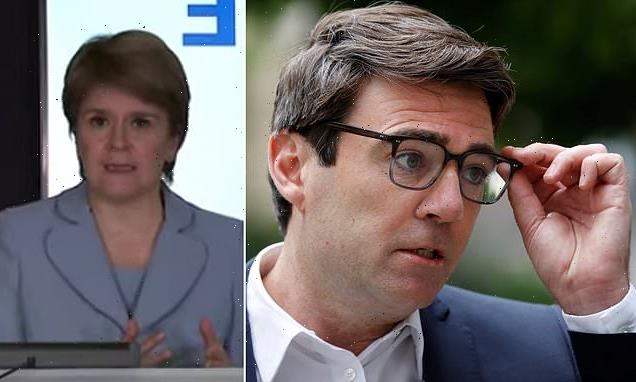 Nicola Sturgeon today ended her war with Andy Burnham as she lifted a ban on non-essential travel between Scotland and Manchester.

The ban came into force earlier this month and it sparked furious clashes between the Scottish First Minister and the Mayor of Greater Manchester.

But Ms Sturgeon told a coronavirus briefing in Edinburgh this afternoon that the rules will now be relaxed. 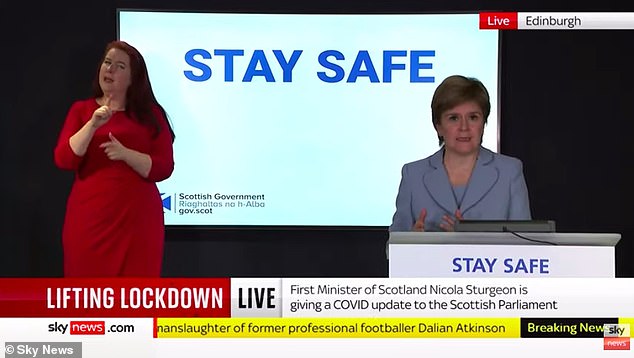 Ms Sturgeon told the briefing: ‘The number of new cases now is still a cause for concern and it is obviously the main issue I want to talk about today.

‘Before I come onto do that though in a bit more detail, I just want to confirm a change that we have indicated this morning in relation to travel.

‘Because there is no longer a significant difference in case rates between Scotland and the following places I can confirm that the travel restrictions relating to Manchester, Salford and Bolton are being lifted.

‘However, restrictions will remain in place for now between Scotland and Blackburn with Darwen where case levels remain higher than in these other three areas.

‘But we will undertake a further review of those restrictions over the course of this week.’

Mr Burnham had previously branded Ms Sturgeon a ‘hypocrite’ for allowing thousands of Scots to head to London for the Euro 2020 football tournament while blocking arrivals from Manchester.

The SNP leader had responded by accusing Mr Burnham of posturing as part of his apparent desire to replace Sir Keir Starmer as Labour leader.

The pair had engaged in talks last week to try to resolve the row but that only caused more acrimony as sources close to Ms Sturgeon labelled Mr Burnham ‘incoherent and absurd’ after they met.

The comments by sources prompted a backlash from Mr Burnham, who accused the SNP of leaking the details of what was meant to be a private head-to-head. 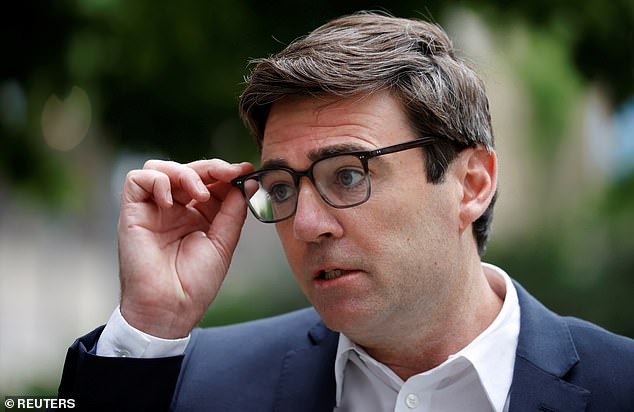 A source close to Ms Sturgeon said Mr Burnham had been unable to respond at the meeting when she pointed out that Greater Manchester’s official website tells visitors to ‘minimise travel in and out of affected areas’.

‘The first minister pointed out the stark contradiction between what Andy Burnham has been saying in recent days and his own authority’s clear advice to ”minimise travel’,’ they said.

‘Burnham had no proper answer to that. His attempted explanation was incoherent and absurd.’

But Mr Burnham publicly attacked the leak, tweeting: ‘And there was me thinking they (the talks) were confidential…’