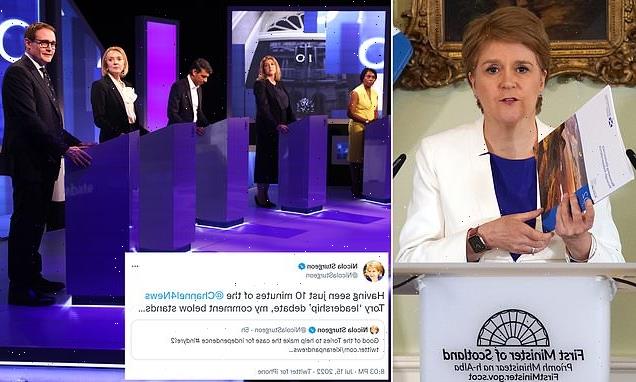 Nicola Sturgeon took another swipe at the Tory leadership hopefuls today as she continued to push her case for a second Scottish independence referendum.

In two separate tweets on Friday, the First Minister claimed the prospective successors to Prime Minister Boris Johnson were helping her to make the ‘case for independence’ with their policies and last night’s televised leadership debate.

First, she reacted to a news story from The Times that reported that Rishi Sunak – former chancellor and current front-runner in the leadership race – would ‘circumvent Holyrood to implement key policies’ if he becomes Prime Minister.

The story quoted Scottish Conservative Party MP Andrew Bowie – a supporter of Mr Sunak – as saying: ‘we cannot trust the SNP (Ms Sturgeon’s Scottish Nationalist Party) to act in the best interests of the Scottish people.’

In response to the story, Ms Sturgeon wrote sarcastically: ‘Good of the Tories to help make the case for independence #indyref2.’

An hour later, the First Minister followed up her initial tweet by saying that the Tory leadership debate, hosted on Channel 4, was having the same effect.

‘Having seen just 10 minutes of the @Channel4News Tory “leadership” debate, my comment below stands…’ she wrote, as Mr Sunak faced off against the other four Tory competitors – Penny Mordaunt, Liz Truss, Kemi Badenoch and Tom Tugendhat. 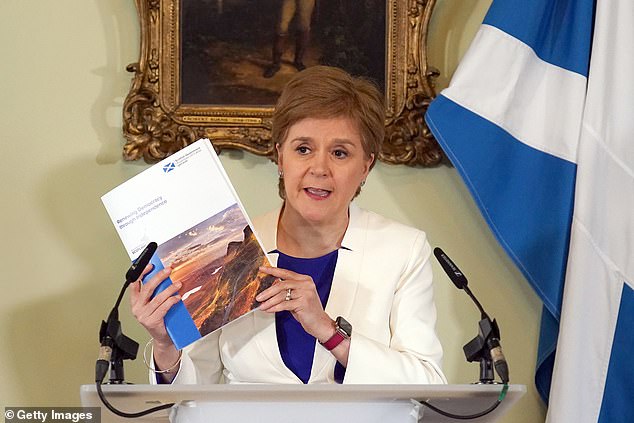 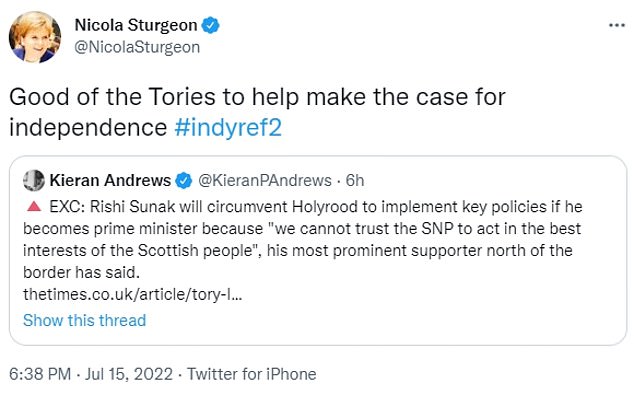 In two separate tweets on Friday, the First Minister claimed the prospective successors to Prime Minister Boris Johnson were helping her to make the ‘case for independence’

‘Having seen just 10 minutes of the @Channel4News Tory “leadership” debate, my comment below stands…’ she wrote, as Mr Sunak faced off against the other four Tory competitors – Penny Mordaunt, Liz Truss, Kemi Badenoch and Tom Tugendhat

Ms Sturgeon’s comments came after she yesterday tore into the Tory leadership hopefuls, claiming that whoever won the protracted race to replace Mr Johnson would be ‘another prime minister Scotland hasn’t voted for’.

It came as she launched the second in a series of papers designed to put forward a ‘refreshed’ case for independence.

The leader of the SNP is demanding a new vote next year, just nine years after Scotland voted to remain in the UK in a once-in-a-generation plebiscite, but Mr Johnson has refused to grant it.

Speaking in Edinburgh, Ms Sturgeon said: ‘We may be just a few days into this Tory leadership contest but it is already crystal clear the issues Scotland is focused on – tackling child poverty, supporting NHS recovery, building a fairer economy and making a just transition to net zero -will be hindered not helped by who ever becomes prime minister in the weeks ahead.’

Voters in Scotland have ‘repeatedly’ returned a majority of MSPs who support independence, Ms Sturgeon added, saying this was ‘treated as immaterial’ by Westminster.

‘You don’t have to be a supporter of independence to know that that is not democracy,’ she added.

The new paper published by the Scottish Government, as part of the Building a Better Scotland series, focuses on democracy, Ms Sturgeon said.

But Ms Sturgeon was on Friday accused of ‘self-indulgence and distraction’ after publishing the new paper.

The document, which detailed what the Scottish Government called a ‘democratic deficit’ at the heart of the union, is the second in a series of papers expected over the coming months which will refresh the prospectus for independence. 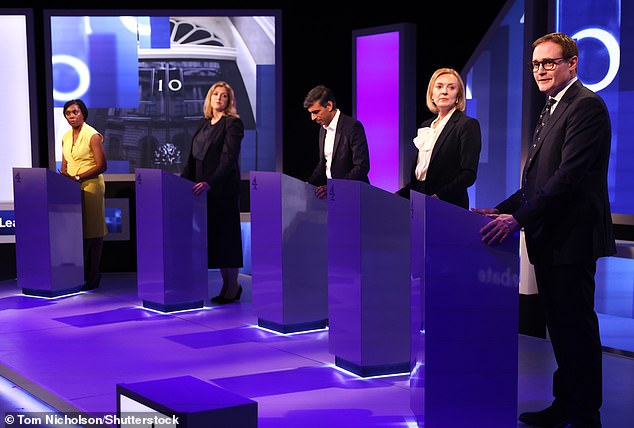 Last month, the First Minister laid out plans for a referendum to be held on October 19, 2023, with Boris Johnson rejecting a request for the powers to hold a referendum in one of his last acts before announcing he would step down as Prime Minister.

The Lord Advocate also referred a prospective Bill on independence to the UK Supreme Court to ascertain its legality.

The First Minister used her speech on Thursday to take aim at both the Tories and Labour, saying that the UK faced a ‘shift to the right’ under a new prime minister, while accusing Labour of ‘giving the proverbial two fingers’ by saying the party would refuse a push for another referendum if it won back Downing Street.

‘Nicola Sturgeon is all too happy to shamefully use her podium at Bute House to push her political obsession and have valuable civil servants’ time and resources wasted on working on the SNP’s only priority.

‘She knows the vast majority of people in Scotland don’t want another divisive independence referendum next year.

‘They want her Government focused on tackling the global cost-of-living crisis, helping our NHS to get through the ever-increasing backlogs in treatment and supporting our post-pandemic recovery.

‘Yet, instead of getting on with the job at hand, she is using her official residence to spout SNP propaganda, which will only paralyse Scotland with years of bitter division and distraction.’

Scottish Labour deputy leader Jackie Baillie said the papers so far had been a ‘cocktail of wishful thinking and fearmongering’.

‘While the SNP reheat their one and only solution to all Scotland’s problems, Scottish Labour have set out real, credible plans to renew democracy in every part of the UK by establishing a Senate of Nations and Regions and prioritising co-operation.’

Lib Dem deputy leader Wendy Chamberlain said businesses ‘shudder’ when the First Minister talks about independence, adding: ‘We should not repeat the mistakes of Brexit by putting up new borders and breaking up the UK.’

On Friday night, the campaign teams of the remaining Tory leadership contenders were assessing the impact of the first TV debate which saw Ms Mordaunt come under fire over her plans for tax cuts and her record on transgender issues.

Amid a series of bruising exchanges, the international trade minister said the attacks by her rivals showed she was the candidate to beat in the race.

‘I take it as a big fat compliment that no-one wants to run against me,’ she said after finishing an unexpectedly strong second in the first two rounds of voting by MPs.

One snap poll of viewers following the debate suggested Mr Tugendhat – who trailed in fifth place in the last ballot – came out on top on the night, with 36 percent saying he had been the strongest performer.

The survey of 1,159 UK adults by pollsters, Opinium, put Mr Sunak second on 24 percent, with Ms Mordaunt and Kemi Badenoch tied on third with 12 percent and Liz Truss fifth on 7 percent.