She often includes alcohol in her indulgent recipes.

But Nigella Lawson has revealed she has cut back on drinking as it tends to ‘exacerbate’ her anxiety.

The TV chef, 58, said although alcohol helps to ease her woes at first, it leaves her with a ‘horrible tight feeling of worry’. 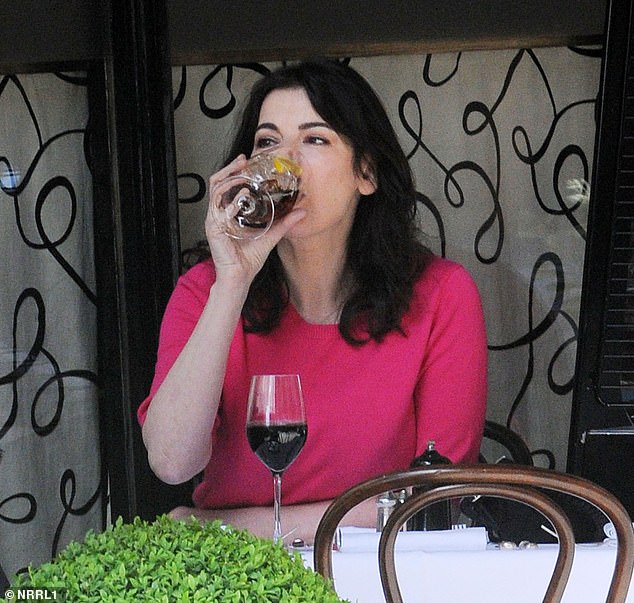 Nigella Lawson, pictured, has admitted she has cut back on her drinking as she is ‘not very good at alcohol’ and often ends up going for midnight feasts

Admitting she is ‘not very good at alcohol’, Miss Lawson said drinking raises her blood sugar levels, which often results in her going downstairs for midnight feasts.

Asked if she drinks alcohol, she said: ‘Yeah I do, but not very often. If I have even two glasses of wine it makes my blood sugar go up and then I need to have lots of food afterwards.

‘So I often will often go out for dinner and if I have wine I will have to eat something when I get back.’

Speaking on Jessie Ware’s Table Manners podcast, Miss Lawson said she now only occasionally drinks wine when she goes out for dinner.

She added: ‘I’ve never been a big drinker. I do like it. I do try to because sometimes I think if you don’t drink, it’s like, after the first hour of a party you’re in a different room to everyone else and that can be quite difficult. 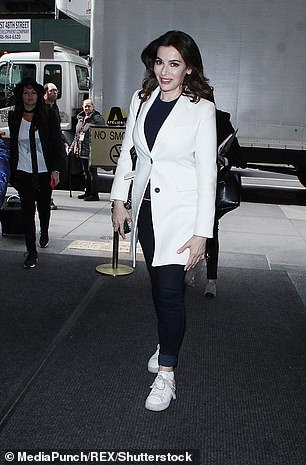 Nigella, pictured here in New York in April, said that now she’s approaching her 60th birthday she has become a ‘grumpy old woman’

‘I feel that I’m quite an anxious person and drink can really exacerbate that anxiety. It gets rid of it at first, but then afterwards, that horrible tight feeling of worry and just generally just not feeling quite right.

‘It’s just it [drinking alcohol] just does something to me, but I think maybe it’s an age thing too after a certain age. You know what it is, it’s being out of practice.

‘Last year I went into training a bit because I went to Italy for three days, so the two weeks before that I started having a glass of wine, a bit each week, to go into training to get myself used to it.’

Miss Lawson admitted recently that she has become a ‘grumpy old woman’ as she nears her 60th birthday, and often wishes to be in bed by 7.30pm.

The mother of two revealed she is feeling increasingly anxious about ageing, but is no longer embarrassed about turning in early.

She explained that she finds herself ‘tutting’ at modern afflictions, such as people constantly on their mobile phones.

‘I have turned into one of those people’, she told an audience at the Leicester Square Theatre.

‘One of the things that really annoys me is when people are watching videos on their phone behind me, and you can hear that noise, I’m really bad at noise. Other people’s noise pollution. I don’t like it.

‘And I do a lot of turning round and tutting. The sort of thing that my grandmother would’ve done and would’ve really embarrassed me, not minding about how “grumpy old woman” I seem.’ She explained that as she approaches her 60th birthday, she found herself yearning for an early night, and no longer felt ashamed of it.

‘What I do like a lot about getting older is that you don’t feel embarrassed about going to bed early,’ she told the event hosted by Standard Issue magazine.

‘I would very happily go to bed at 7:30. I don’t do much sleeping but I need to be lying down. And I think that’s a wonderful state to be in. When you’re younger people think you shouldn’t be that person, you shouldn’t do that, but now I really don’t mind about that.’

Dozens of bodies are left on the streets of Ecuadorian city