Thousands of brave women and girls who survived Boko Haram’s brutal rule while kept captive by the militant Islamist group have been raped by Nigerian soldiers who claim to be rescuing them, Amnesty International has revealed.

The human rights organisation has today urged Nigeria to act on claims that soldiers and members of the civilian militia have raped women and girls in remote camps for people displaced by Boko Haram.

Amnesty said it had gathered multiple testimonies about alleged abuse by the security forces, including claims that soldiers coerced vulnerable survivors into having sex in exchange for food. 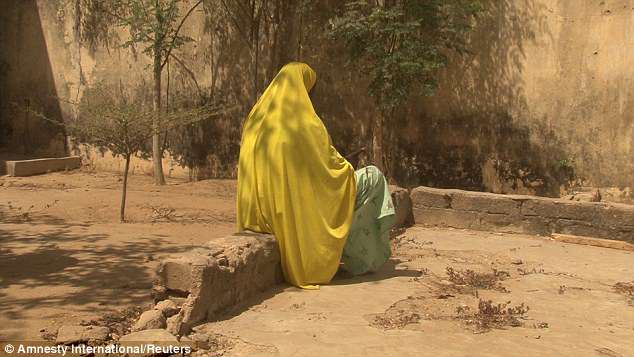 Pictured: Just one of the scores of women who told Amnesty International about her suffering, following the alleged abuse by the Nigerian army, during its fight against Boko Haram 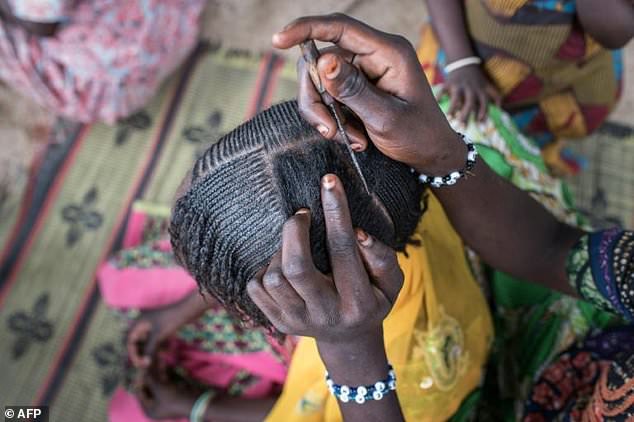 A woman braids a girl’s hair at a camp for the internally displaced in northeast Nigeria, where rights groups say women and girls are at serious risk of sexual abuse and rape

Its report, ‘They betrayed us’, is the result of a two-year investigation, based on interviews with more than 250 people affected by the situation in north-east Nigeria.

The findings explain what happened to the hundreds of thousands of people, particularly women, who fled or were forced from areas controlled by Boko Haram. The Nigerian military ordered those it was ‘freeing’ to satellite camps, where various abuses, and even deaths, are alleged to have occurred.

The Nigerian military and Civilian Joint Task Force, a militia working alongside it, have carried out systematic patterns of violence and abuse, according to the report. 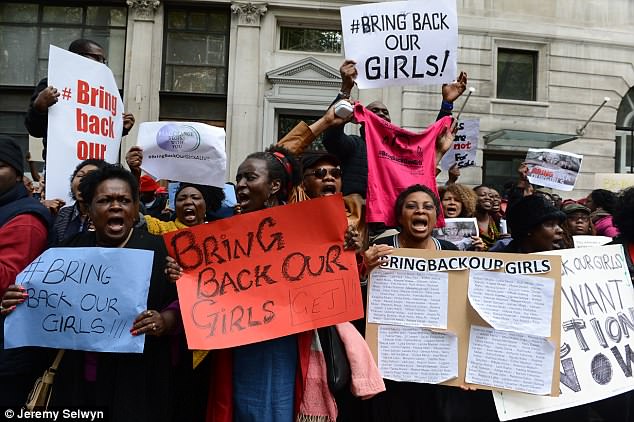 Back in 2014, people were protesting for the release of girls kidnapped by Boko Haram in Nigeria (file photo)

Children gather around a burnt-out car following an attack by Boko Haram on January 31, 2016. A survivor hidden in a tree said he saw extremists firebomb huts (file photo)

Women told Amnesty how they have been raped in exchange for food, and thousands of people, including children, have starved to death in the camps since 2015, it adds.

Security officials are alleged to have beaten women, and labelled them ‘Boko Haram wives’ when they complained about their treatment.

Women and girls, many of whom have been separated from their families, are vulnerable to sexual abuse and say rape is widespread both in and outside the camps, according to aid agencies.

‘Scores’ of women told Amnesty that soldiers and civilian militia members coerced them into becoming ‘girlfriends’, which meant them being available for sex.

Sexual exploitation was at an ‘alarming level, as women remain desperate to access sufficient food and livelihood opportunities’, the human rights watchdog added.

Amnesty’s Nigeria director, Osai Ojigho, said: ‘Sex in these highly coercive circumstances is always rape, even when physical force is not used, and Nigerian soldiers and (militia) members have been getting away with it.’

He said it was time for President Muhammadu Buhari ‘to demonstrate his frequently-expressed commitment to protect the human rights of displaced people in northeast Nigeria.

‘The only way to end these horrific violations is by ending the climate of impunity in the region and ensuring that no-one can get away with rape or murder,’ he added.

But the government said the organisation was repeating false accusations.

In November 2016, police vowed to look into allegations of sexual abuse and exploitation in the camps but several months later, the military rejected the allegations.

However, ‘it is not always clear if these investigations were carried out and no reports have been made public,’ the London-based human rights group said in a statement.

Nearly 1.8 million people have been displaced within Nigeria by the Boko Haram insurgency, which has killed at least 20,000 since 2009, according to the latest available figures to April 30.

When including statistics from neighbouring Cameroon, Chad and Niger, the number of people forced to flee their homes by the violence reaches nearly 2.25 million, says the UN refugee agency UNHCR.

Military gains have wrested back control of areas previously held by the Islamist militants, laying bare the extent of the damage to farming and fishing on which most locals depend.

By the end of March, 3.5 million people were in need of humanitarian assistance, the UN said. Malnutrition cases with medical complications are expected to rise in the upcoming rainy season.