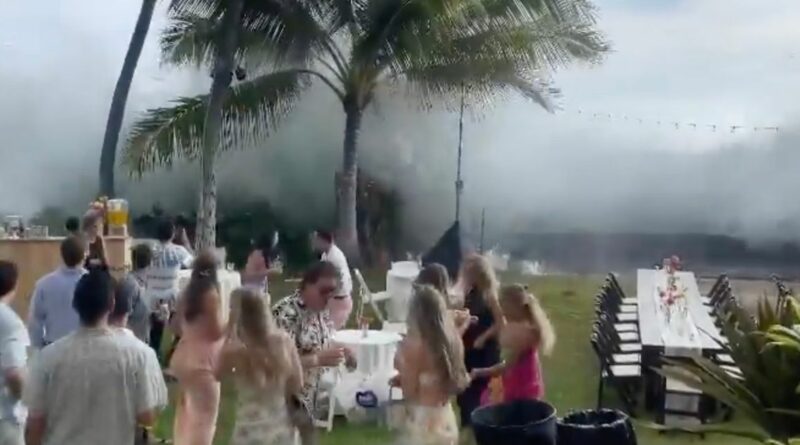 Guests at a wedding reception had to run for cover as a huge wave crashed over the permiter wall of the venue.

The dramatic scene took place at the Keauhou Kona Surf & Racquet club in the town of Kailua, Hawaii.

Footage shot at the beachside venue shows attendees, who appear to be mostly from mainland US, watch on as the wave swells in the distance.

READ MORE: OnlyFans model brags after arrest for possession of '100 doses of cannabis'

At the point where it becomes apparent that the wave might leap over the wall, people flee.

Seconds later the venue is covered in water, and the wedding set up was trashed.

Local reporter and meteorologist Malika Dudley said that guests told her "they weren’t expecting it to be this bad."

"Other local guests also wanted people to know that the wedding was still beautiful. No one was hurt," she added.

ABC News said also that no injuries were reported, but the wedding cake was destroyed.

According to a report by Weatherboy, tropical storm Darby off Mexico’s Pacific coast faded away on Sunday, but an unrelated swell from the Southern Hemisphere continued to hit Hawaii and officials extended the closure of beach parks in Hawaii.

In a separate clip from the venue, waves are seen crashing over two-storey houses.

According to Hawaii News Now, several condos were damaged by the waves, including the residence of Isabella Sloan, who filmed the waves shooting over the homes.

"My condo was hit the first time and flooded everything. Condos down the way from mine were completely wiped out and damaged really badly. Thankfully, everyone is safe," Sloan said.

Massive waves have hit along the island state's southern shores over the weekend.

According to the National Weather Service, south-facing shores were at risk of experiencing waves that could crest at heights of 15 to 22 feet through Monday.