Seoul: North Korea has fired "a barrage" of unidentified short-range missiles toward the ocean, according to the South Korean military.

The North "fired multiple rounds of unidentified missiles from its east coast town of Wonsan in the north-eastern direction between 9.06am [10.06am AEST] and 9.27am today," the JCS said in a statement according to the Yonhap news agency.

They flew for a range of about 70 to 100 kilometres, the JCS said, adding that South Korean and US authorities were analysing details of the missiles. 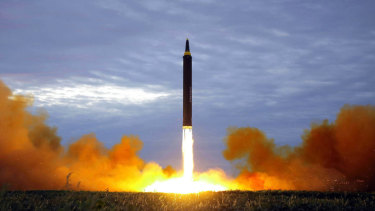 A Hwasong-12 intermediate-range missile is fired in North Korea, in 2017.Credit:AP

The South Korean Defence Ministry was not available for comment.

North Korea has not completely halted weapons testing, despite protracted on-again-off-again negotiations with the US government and diplomatic efforts by South Korea and China.

While the description suggests the weapon wasn't a nuclear device or intercontinental ballistic missile, the test sends a pointed message to the US and its allies in South Korea about the risk of allowing denuclearisation talks to fall apart.