Seoul: They are the simplest of dreams.

To see familiar streets once more. Or walk along a river at the centre of childhood memories. Or throw a big party with wine.

These dreams belong to people who risked everything to flee North Korea and then, as some of the most high-profile defectors, spoke out about the rights abuses and repression of Kim Jong-un's regime. 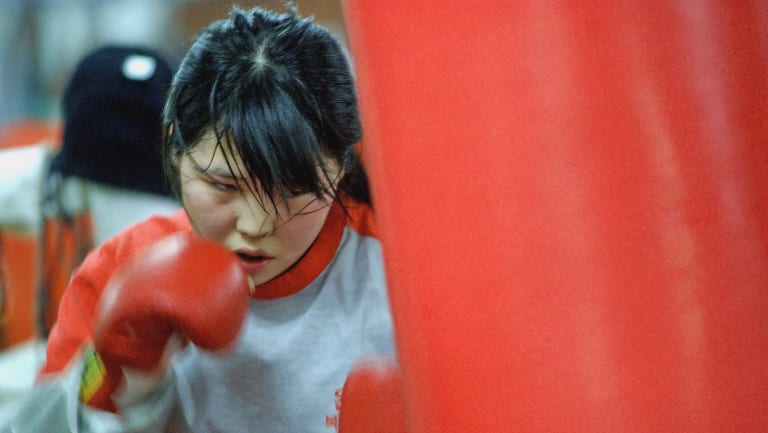 Former North Korean defector Choi Hyun Mi, 14, beats a sandbag during her training at the Dongbu Unsung Gymnasium in Seoul.

But now, ahead of Tuesday's summit between Kim and US President Donald Trump in Singapore, the defectors are considering a question that until recently seemed foolish to ask: Could they one day return home?

Such discussions have rippled through the community of some 30,000 North Korean defectors in Seoul and elsewhere across South Korea. But one group stands out. 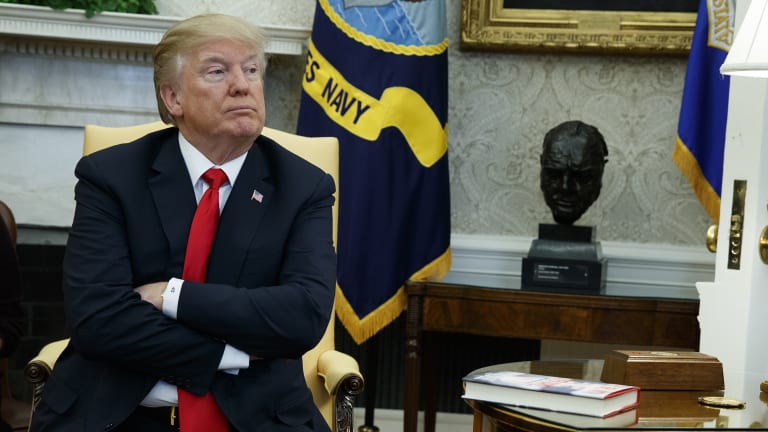 Donald Trump listens during a meeting with North Korean defectors at the WHit House in February.

Eight defectors – six living in South Korea and two in the United States – met Trump in February in the Oval Office, drawn into the very heart of the brinkmanship and political theatre that led to the summit. They shared their stories of imprisonment, torture and suffering at a time when military conflict with North Korea appeared more likely than diplomacy.

Four of those defectors reflect on this new moment: potentially history-shaping in scope, but also one that is deeply personal and possibly life-changing for each of them.

Jung Gwang-il is always trying to figure out how to cross the border. Not for himself. He is looking for new routes and methods to send across flash drives, memory sticks and other bits of technology packed with glimpses of what's outside: Hollywood films, South Korean shows and videotaped accounts from other North Korean defectors.

"Until the people in North Korea have a right for information, I will continue," said Jung, 55, whose group No Chain has used balloons and smugglers and has considered drones. 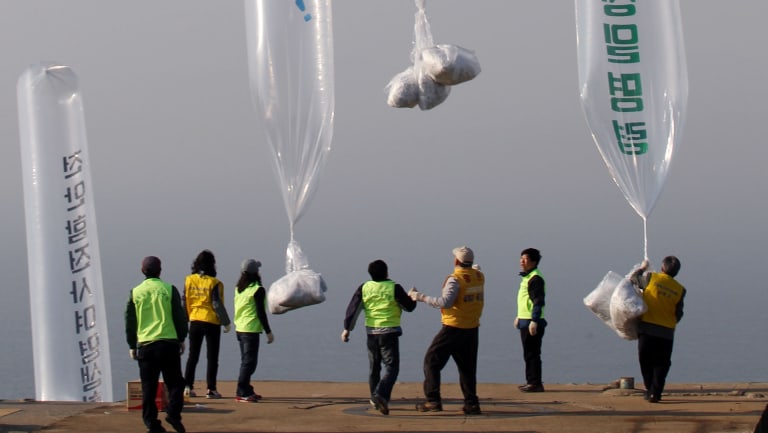 In 1999, he was arrested in North Korea on espionage charges, possibly because of indirect business dealings with South Koreans via China. He denies the charges but said he confessed under torture. Then came three years at the Yodok political prison camp. Drawings by a former Yodok detainee in a UNreport include images of starving prisoners eating rats.

A year after his release, still emaciated and weak, he swam across the Tumen River to China. He made his way to Thailand and, finally, to Seoul.

Jung is tirelessly upbeat about how his activism helps chip away at censorship and propaganda. But his optimism does not extend to the summit. "Zero expectations," he said.

"I would like to go home, but I know I can't as long as Kim Jong-un is in power," Jung said. The risks, he feels, are just too high. His return could bring new problems for his brother, a state overseer at a factory. His brother once concocted a story that Jung was not even a blood relative.

"I left this place with [a] broken heart, and whenever I see it I wish to go back. There were also times when I called my brother at the place," he said, referring to a spot in China near the border. "Since it was so close to where he's at, I told him, 'If I wave here, he might be able to see me.' " 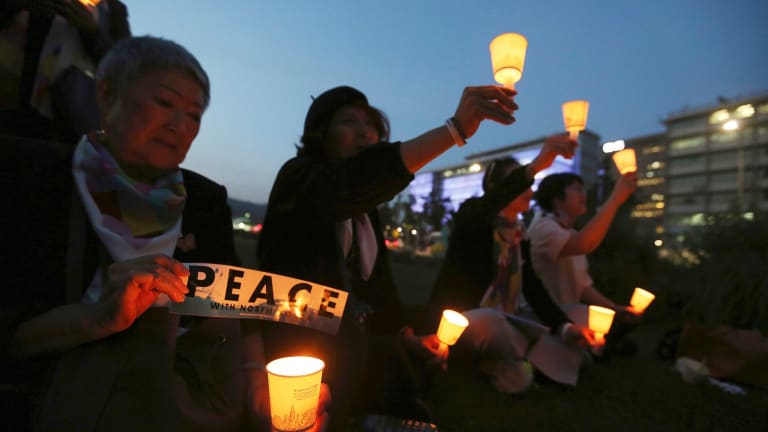 Protesters hold candle lights during a rally to denounce the United States’ policies against North Korea near the U.S. embassy in Seoul last month.

Lee Hyeon-seo, 38, was in London in April when she heard of plans for the first meeting between Kim and South Korean President Moon Jae-in, which helped open diplomatic doors for the Singapore summit.

"I was really stunned. I was looking up at the sky and thinking, 'If that really happens and – over time, maybe I can really visit by home country and see all my relatives and my friends," said Lee, who chronicled the story of her life in North Korea and her escape in a 2015 book, The Girl with Seven Names.

"I really had that hope," Lee said, speaking in English she learnt since arriving in South Korea in 2008 after a decade living under false identities in China. "But also, at the same time, I don't really want to have the dream about [returning] because, when it breaks, I will be hurt again."

Lee left the North in 1997, travelling over the frozen Yalu River into China. She moved to South Korea in 2008. She joined other defectors in urging the West to topple the Kim dynasty. Only then, she believed, could she again see her home town, the industrial city of Hyesan.

But she now wonders whether Kim could remain in power if he took steps to end decades of political repression and isolation.

"I don't know, maybe 10 years later or maybe 20 years later – even if Kim Jong-un controls the country, he can't really control it," she said. "So maybe this is the first option, first step."

Lee is mostly worried about her mother, who mourns seven brothers and sisters lost to famine and political crackdowns over the years. Her mother, who reached South Korea seven years ago, wants desperately to return home.

"I can't give her unification, but I can at least try," she said. "She is old right now, and she knows that certainly, in her life, time maybe is not there for her to see her relatives."

The man with crutches

The biggest photograph in Ji Seong-ho's office is a black-and-white image, grainy and slightly out of focus, of his class on an outing when he was 10 years old. The students assembled in neat rows under a statue of Kim Jong-suk, a North Korean guerrilla hero and the first wife of then-leader Kim Il-sung. 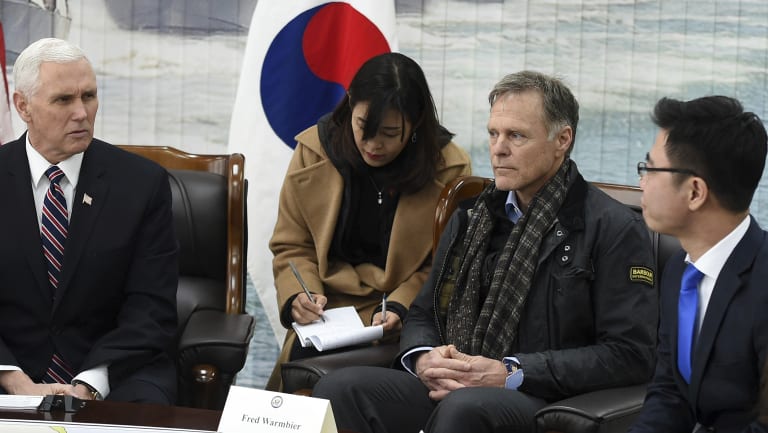 US. Vice President Mike Pence, left, talks with North Korean defector Ji Seong-ho, right, as Fred Warmbier, the father of Otto Warmbier, an American who died after being held in North Korea, listens at the Cheonan Memorial in Pyeongtaek, South Korea in February.

Ji now wonders if someday soon he might go back to that same spot and celebrate a turning point for North Korea with other defectors and former political prisoners.

"I still don't know what exactly I will be doing when [reunification] comes, but I will be helping North Korean people to settle well into democracy and freedom," said Ji, 36, who leads a Seoul-based group called Now Action and Unity for Human Rights, whose funding is covered by groups that include the National Endowment for Democracy.

Such a return would bring back one of the most renowned international faces of dissent against Kim's regime.

In 1996, amid crippling famine, Ji tried to steal a few pieces of coal from a rail yard to barter for food. He passed out from hunger and was hit by a train, forcing doctors to amputate his left arm and left leg without anaesthesia. A decade later, he slipped across the border to China, hobbling on rough-hewed wooden crutches and crude prosthetics. At Trump's State of the Union address in January, he stood in the VIP gallery and held up the same crutches.

"When I get to go back to my home town, I want to tell people that, even if I led a relatively better life here, I never forgot about you," he said.

Then comes some fun. "Above all, I want to throw a huge feast," he smiled. "'Look, I came with a truckload of rice and beef. Let's relieve our hunger with delicious food!' There will also be wine at the feast. 'Look, this is something called wine. Only the Kim family used to enjoy this, but now you can all savour it as well.' "

In his addresses around the world, Ji finds inspiration in the Reverend Martin Luther King jnrs 1963 "I Have a Dream" speech. He likes the message that change can come from the streets, from churches, from anything and anywhere that helps breaks fear. That includes the stirrings of free enterprise.

On his desk is a green plastic piggy bank with some coins inside. Written on the side: For reunification. 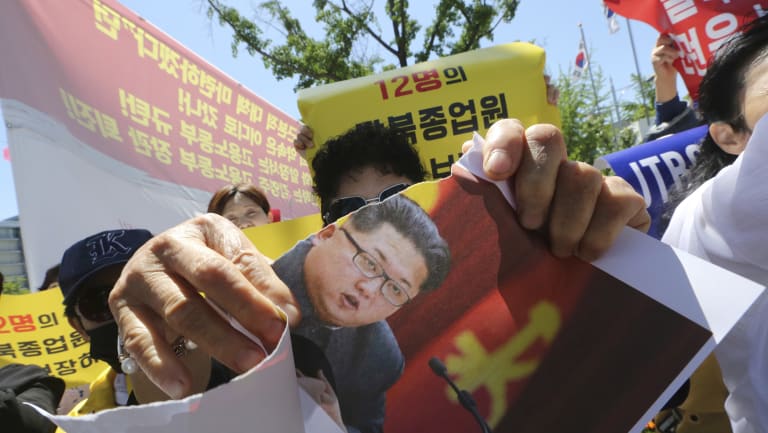 When Hyun In-ae allows herself to imagine a return to North Korea, she sees a classroom. She is giving a lecture on sociology and feminism. The students, she likes to think, will include many women discovering their political and civic voices in a changing North Korea.

"The biggest problem is that North Korean women don't even know they have rights to speak out, to change their own lives," said Hyun.

Hyun, 61, knows the workings of the regime better than most defectors. She and her husband led relatively privileged lives as academics. Hyun studied philosophy at Kim Il Sung University in Pyongyang and later taught Juche ideology – the guiding principles of the Kim dynastic rule – at two major universities.

That all changed when her husband was arrested for alleged anti-regime crimes. Hyun's two sons, then teenagers, fled the country after hiding for several years. Hyun followed in 2004. She is now studying for a doctorate in North Korean studies at Ewha Womans University in Seoul, where she also works with reunification groups. Her husband, she learned, died in state custody.

"I am cautiously anticipating to go back in five years or so. Other defectors tell me that even five years is unrealistic, and we'll have to wait for at least a decade, even if the upcoming summit goes well," she said. "Still, I'd say the summit is making me feel a little hopeful."

In the meantime, she has been tackling a bit of social reform on her own.

"I see male defectors who would not lift a finger to do the dishes or cooking. So I tell them to help out," she said. "They tell me, 'Dr Hyun is getting weird these days, talking women's rights and such. You're different.' "