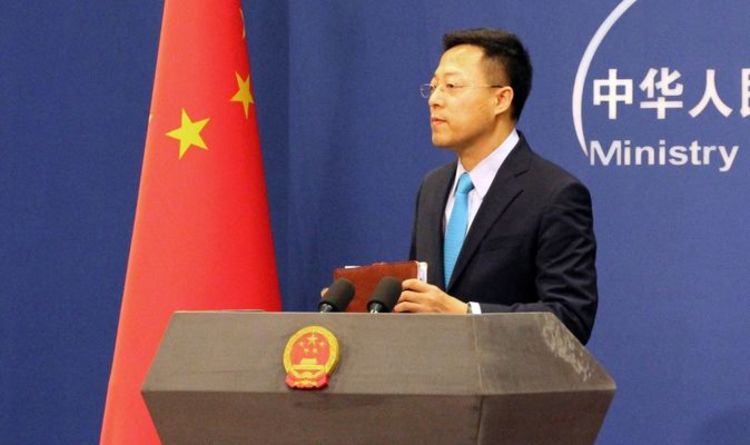 China and Russia slammed by Mark Dolan over COP26 snub

According to the BBC, Foreign Ministry spokesman Zhao Lijian told a press briefing on Monday that Beijing carried out a test on its spacecraft technology in July. He said: “This was not a missile, this was a spacecraft.

“This is of great significance for reducing the cost of spacecraft use.”

Zhao added: “China will work together with other countries in the world for the peaceful use of space and the benefit of mankind.”

The announcement comes following a report in the Financial Times which suggested the development of hypersonic missiles in China had caught the Americans off-guard.

The report, which included accounts from five unnamed sources, had claimed the low-orbit rocket was launched earlier this year.

During the reported test mission, the hypersonic missile is said to have narrowly missed its final target by around two dozen miles.

While the Beijing spokesman appeared to reject the FT’s report, a US news network has claimed the spacecraft’s launch was related to the development of hypersonic missiles.

ABC News reports the Chinese space program is “run by its military and is closely tied to its agenda of building hypersonic missiles and other technologies that could alter the balance of power with the United States”.

Washington’s disarmament ambassador Robert Wood responded to the reports of hypersonic missiles on Monday by saying he was “very concerned” by Beijing tests and added America “had held back from pursuing military applications for this technology”.

While in Geneva, Mr Wood also told reporters: “We just don’t know how we can defend against that technology, neither does China, neither does Russia.”

In Asia, Japan has also come out to blast Beijing.

According to ABC News, Tokyo’s Chief Cabinet Secretary Hirokazu Matsuno said Japan would ramp up its defences against “any aerial threat”.

“China’s rapidly expanding and increased military activity at sea and airspace has become a strong security concern for the region including Japan and the international society,” he said.

Although China has denied this launch was a hypersonic missile, it appeared to unveil a similar rocket at a recent military display.

This means China, the United States, Russia, North Korea, and around four other countries are currently working on such technology.