German Chancellor Mrs Merkel at an EU summit earlier today: “I will lobby for a more co-ordinated approach, particularly with regard to entries from regions where virus variants abound.”

French President echoed those comments, and said: “We must all be vigilant because the much-talked-about Delta variant is coming, which spreads much more rapidly than the other variants and affects people who are not vaccinated or who only have had one dose.

“For me, one of the issues of discussion is to be really taking co-ordinated decisions in terms of opening of borders to third countries and on recognising vaccines because at this stage we have to limit this to the vaccines that have been approved by the European medical authority.”

But the UK has hit back at the joint stance from France and Germany, with Environment Secretary George Eustice questioning whether such a move is “justified”.

“I don’t think such a move would be justified but obviously it’s for individual countries to make these judgments.”

The increasing hard line stance from the EU against the Delta strain comes as the UK prepared to add the Balearics and Malta to the ‘green list’ of destinations – meaning they will not have to isolate when they return home. 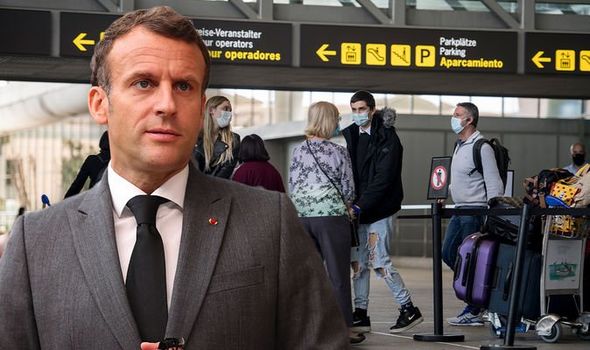 Plans to scrap ‘amber list’ restrictions for those who have received both vaccines doses are also being considered Downing Street, and could come into effect within the next few weeks.

Earlier today, Mr Johnson would not be drawn on the toughened stance from within the EU.

During a visit to Aldershot, the Prime Minister said: “Let’s see where we get to with all this.

“I think that the real opportunity we all have now is to open up travel through the double jab.

“We’ve got more than 60 per cent of our population have now had two jabs, 83 per cent have had one jab, we’re really getting through it now.

“I’m not going to claim that this summer, for travel purposes, is going to be like any other summer.

“I don’t want to cast a pall over things but, as I said the other day, it will be different.”

On Wednesday, Mrs Merkel had pushed for a crackdown on Britain by insisting visitors from the UK arriving in the should isolate.

The EU figurehead wants better coordination to fight the spread of the highly transmissible Delta variant that is quickly sweeping throughout the UK and is now making its way through the bloc.

She told the Bundestag lower house of parliament: “In our country, if you come from Great Britain, you have to go into quarantine – and that’s not the case in every European country, and that’s what I would like to see.”

That warning from the German Chancellor came after she raged at Portugal – a country that is allowing British tourists entry without the need to quarantine.

Speaking alongside European Commission President Ursula von der Leyen at a press conference, she warned the bloc’s failure to agree to a joint travel policy on coronavirus was starting to “backfire”.

Mrs Merkel said: “What I regret is that we have not yet been able to achieve a uniform behaviour among the member states in terms of travel restrictions.

“We now have a situation in Portugal that could perhaps have been avoided, and that’s why we have to work even harder on this.

“We’ve made pretty good progress in recent months, but we’re not yet where I would like the European Union to be.”