EL PASO, Texas – Hundreds of trucks lined up Tuesday at the Zaragoza International Bridge connecting El Paso and Ciudad Juárez, Mexico. Some truckers slept in their cabs. Others stood outside for fresh air. One skipped rope to pass the time.

Truckers began blocking traffic across the Zaragoza bridge on Monday, the only way they said they knew how to get attention to their ordeal. By Wednesday, the protests had spread and threatened supply chain delays and even produce carried in unrefrigerated trucks, Bloomberg reported.

Supply chain: Supply chain issues are slowing deliveries, but the real problem is all your shopping

Peak inflation: After a string of 40-year highs, will inflation slow down? Some economists think so. 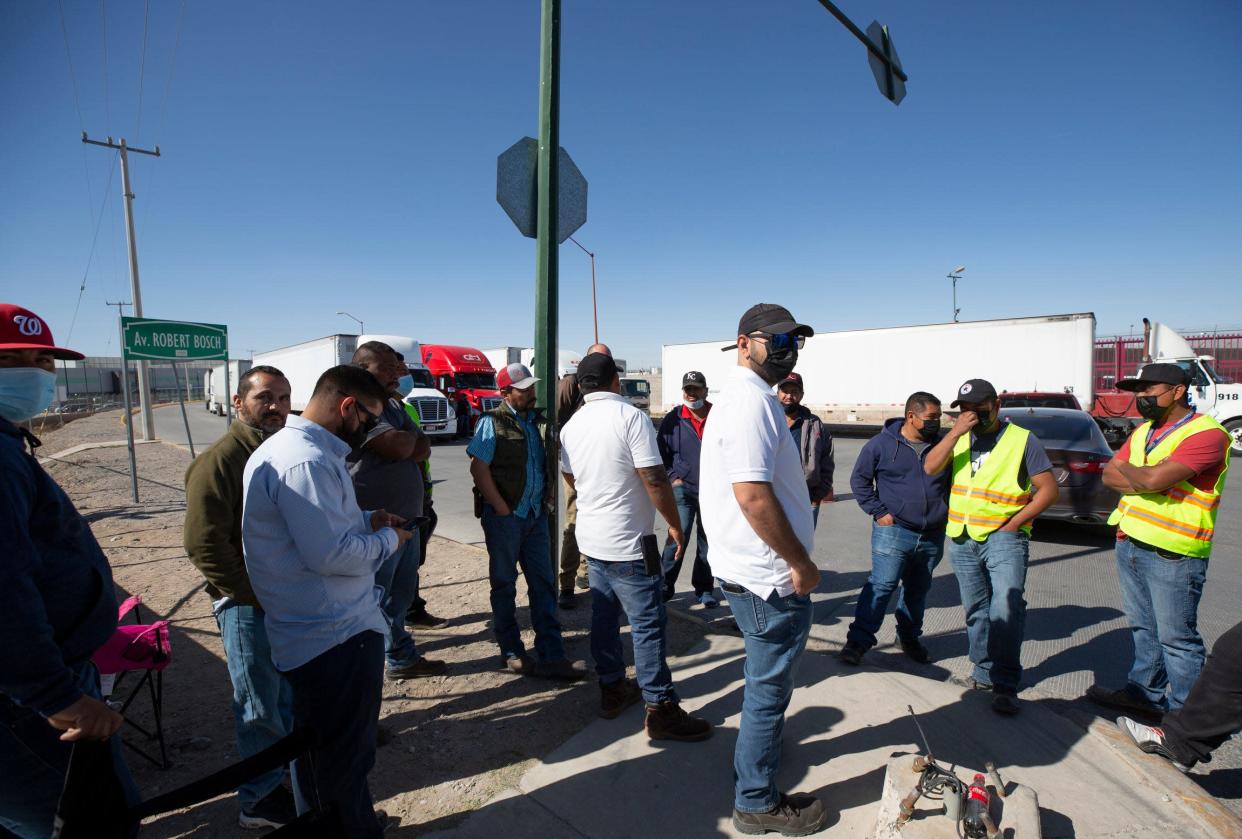 By noon Tuesday, truck drivers had also blocked the commercial lanes at the port of entry in Santa Teresa, New Mexico. Companies had routed truckers to Santa Teresa to avoid the Texas inspections.

The inspections, and now blockades, stymied commercial truck traffic in much of the borderland, with no end in sight.

"The longer than average wait times – and the subsequent supply chain disruptions – are unrelated to CBP screening activities and are due to additional and unnecessary inspections," the statement read.

CBP reported peak wait times at the Ysleta bridge of 335 minutes and 300 minutes at the Bridge of the Americas, which are other El Paso crossings.

White House press secretary Jen Psaki on Wednesday called for Abbott to halt the "unnecessary and redundant inspections," saying they are "causing significant disruptions to the food and automobile supply chains, delaying manufacturing, impacting jobs, and raising prices for families in Texas and across the country." 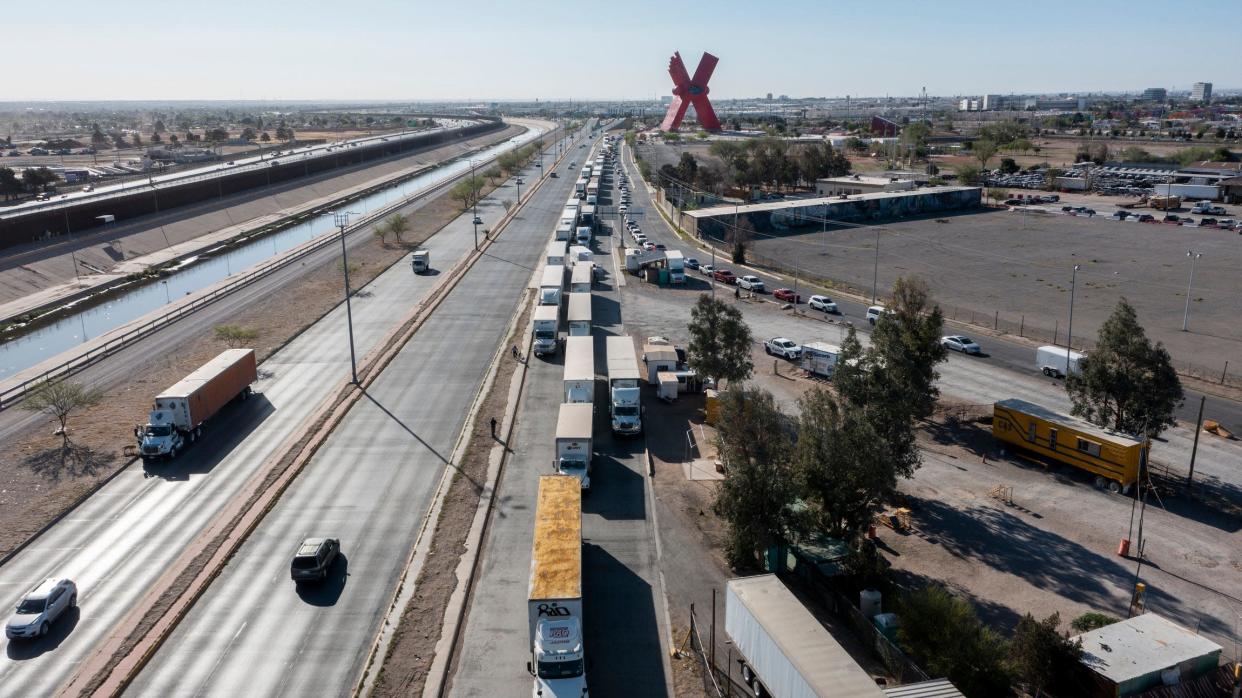 Mexico's Department of Foreign Affairs on Tuesday condemned the new measures and said the Mexican government has raised the issue with Abbott's office and the U.S. government.

“The Department of Foreign Affairs rejects these state measures, which are seriously jeopardizing the commercial flow between our countries," the statement read. "As an inevitable consequence of these provisions, businesses in Mexico and the United States are losing competitiveness and revenues." 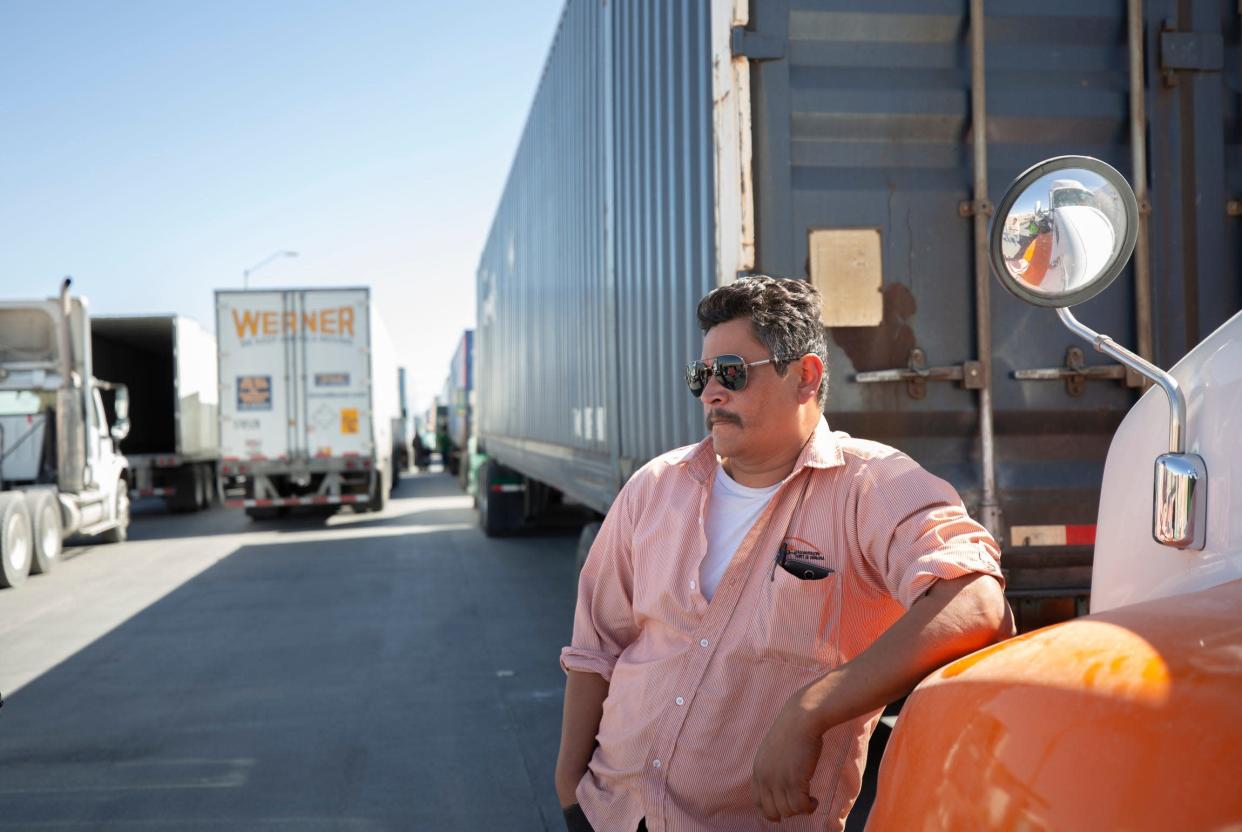 Abbott last week ordered state police to inspect shipments into Texas to “ensure that Texans are not endangered by unsafe vehicles and their unsafe drivers.” His order also cited “cartels that smuggle illicit contraband and people across our southern border.”

In the first six days of Abbott’s decree, Bloomberg reported, almost 12,000 violations were cited, many for things such as defective lighting and brakes, and 79 drivers were “placed out of service.”

Truckers interviewed said they already face strict inspections and questioned why Abbott singled them out. Most of the truckers cross back and forth between Juárez and El Paso multiple times a day, delivering goods to warehouses where they are transferred onto long-haul trucks.

"The warehouses in El Paso are going to start running low," said Cristian Muñoz, also waiting at the Ysleta Bridge. "I don't think the U.S. government will listen to us if we complain but maybe they will listen to those companies."

Muñoz, 25, was one of the truckers who crossed at Santa Teresa on April 11 to avoid the Texas inspections. He got home at 11 p.m. after waiting more than 10 hours to cross. Tuesday he lined up to cross the Zaragoza bridge at 3 a.m., bringing more food for the wait.

“No one knows what’s going on,” he said. “We were caught off guard.”

"If we don't cross the merchandise, the companies don't get paid," Muñoz said. "This is unnecessary. I understand they have to be strict in the inspections, but this is over the top." 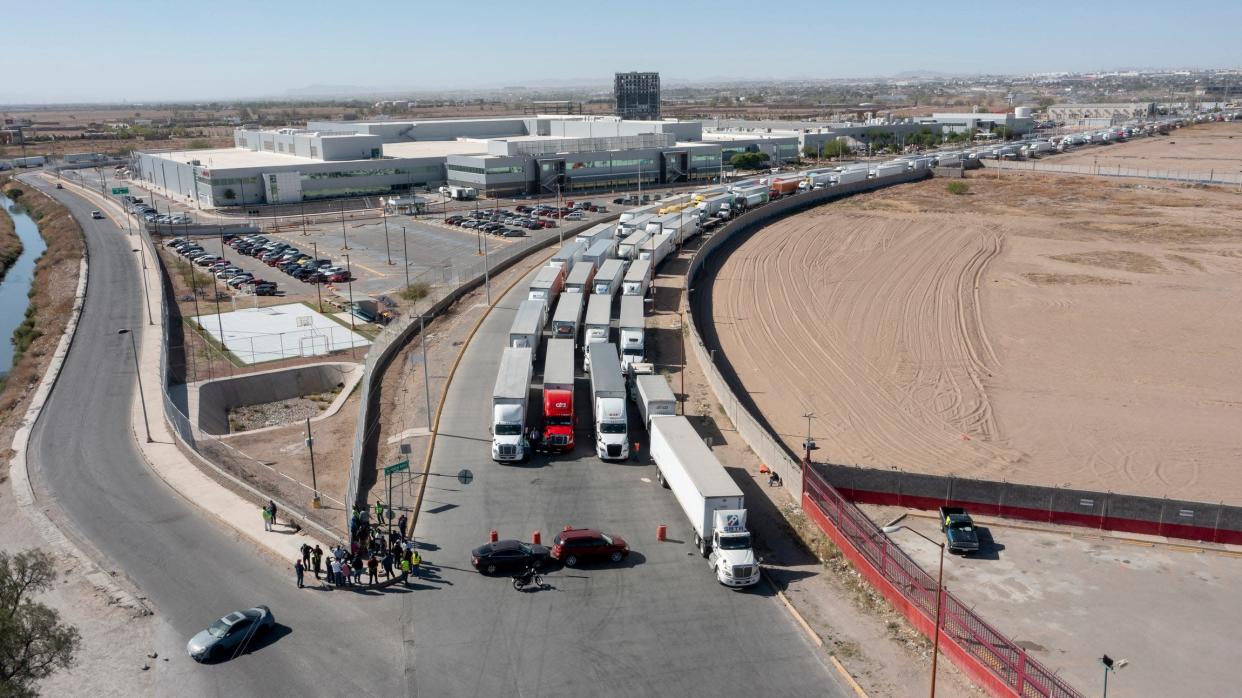 Some truckers came from the capital city of Chihuahua, a four-hour drive, and had no choice but to sleep in their trucks overnight when they were unable to cross.

Trucks carrying medical equipment, hospital linens and auto parts were lined up at Zaragoza and Santa Teresa, representative of the many industries in Juárez that U.S. consumers depend on. 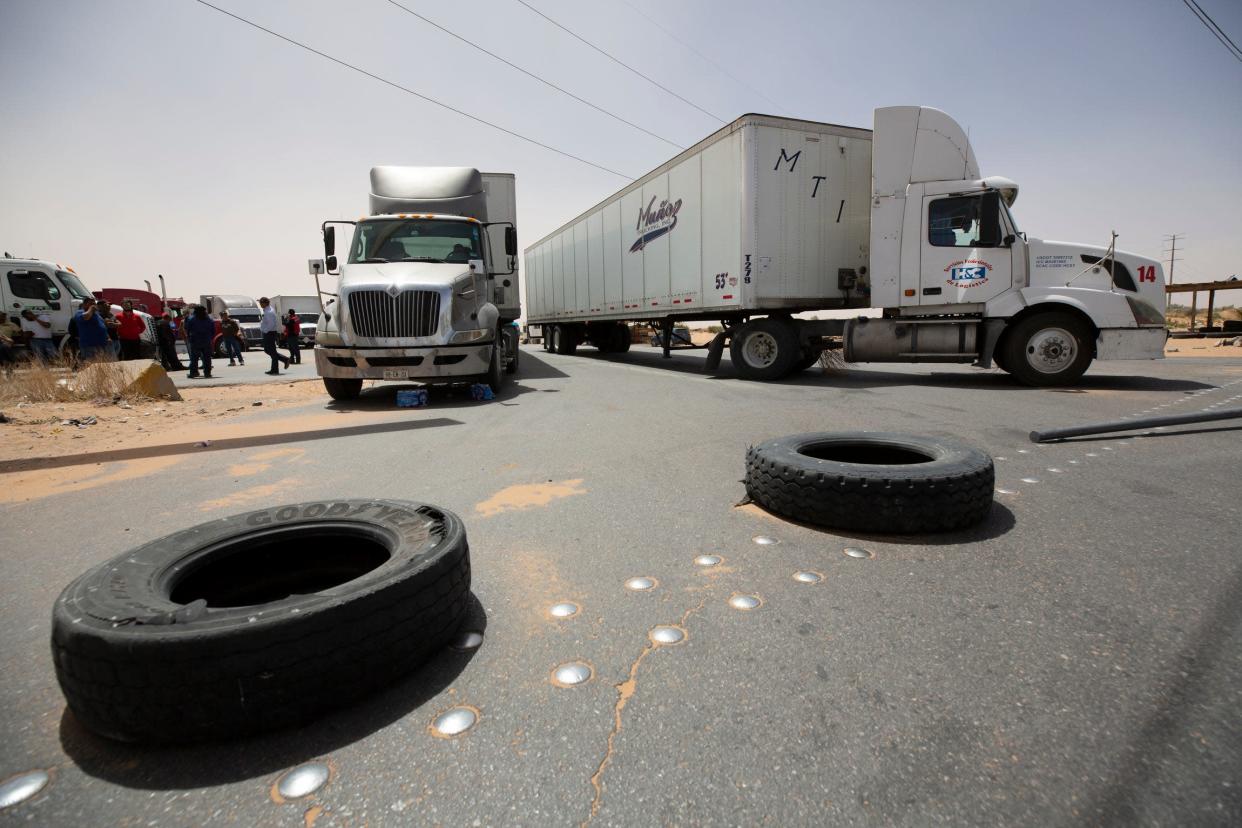 Nick Delgado, president and owner of Quality Food and Veg, one of El Paso’s largest produce distributors, said trucks hauling produce from Mexico for his company have seen delays of 10 hours to two days in the McAllen and Hidalgo areas because of the extra Texas inspections.

“We have truckloads every day crossing” from Mexico into Texas with avocados, tomatoes, and other produce that are sold to grocery stores, restaurants, schools, and other institutions, he said.

“If this goes on, it will dry up supplies and we won’t be able to get it in,” Delgado said. “This will hurt the food chain. Consumers will start seeing shortages,” and that also will cause prices to increase, Delgado said. 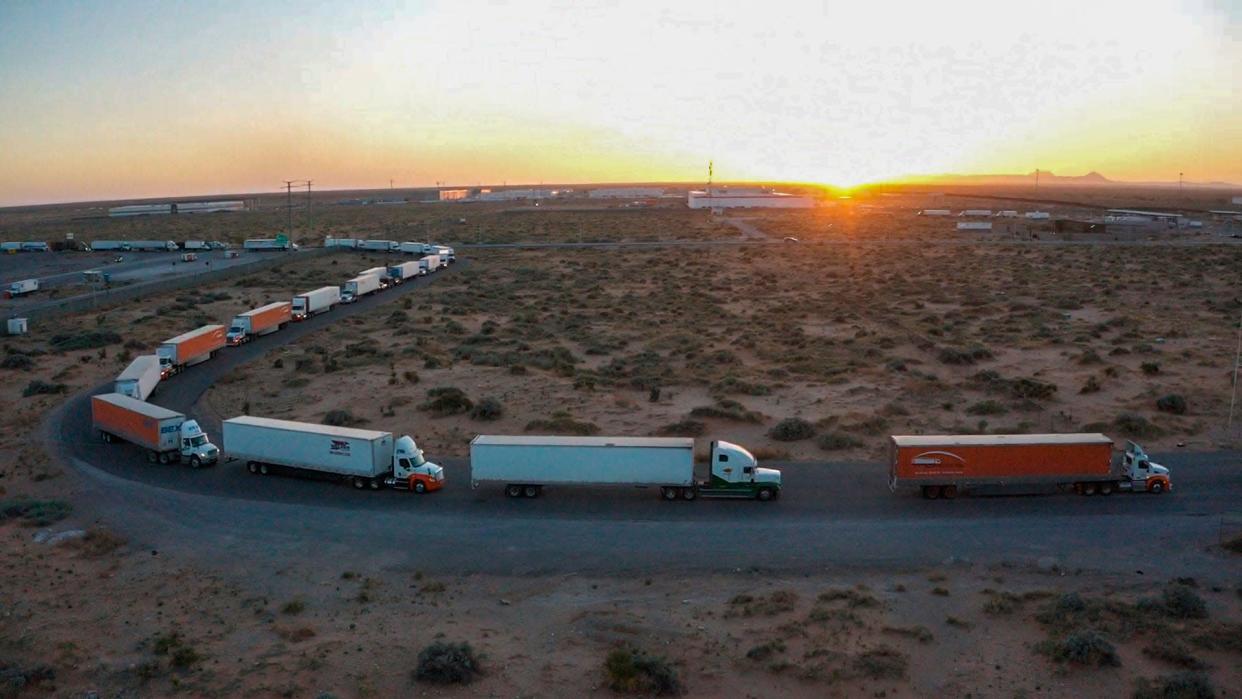 Alan Russell, CEO of El Paso’s Tecma Group of Companies, which operates about 35 maquiladoras, or factories, in Ciudad Juárez, and operates a trucking company, said the Texas inspections “definitely slowed commerce down, but did not stop it” as, he said, the protest blockades have done.

“It’s hard to tell how long this will last. Our supply chain has been interrupted enough (by pandemic-related problems), and this is just another straw on the camel’s back,” Russell said.

“This will impact consumer goods” if products and manufacturing components can’t get out of Mexico into the United States, Russell said.

Staff writer Martha Pskowski may be reached at [email protected] and @psskow on Twitter.