NPR has fired their film critic contributor David Edelstein after he inappropriately joked about a scene from Last Tango in Paris where the actress said she ‘felt raped’.

In a scene from the 1972 film, Late actress Maria Schneider revealed decades later  that during the infamous ‘butter scene’ in the 1972 movie – in which the product is used as a lubricant – she was genuinely crying.

She disclosed that director Bernardo Bertolucci conspired with actor Marlon Brando to spring the unscripted non-consensual sex scene on her at the last moment.

After Bertolucci died aged 77 Monday, Edelstein shocked fans by posting an image from that moment between Brando, 48, and Schneider, 19, on Facebook and captioned it: ‘Even grief is better with butter.’ 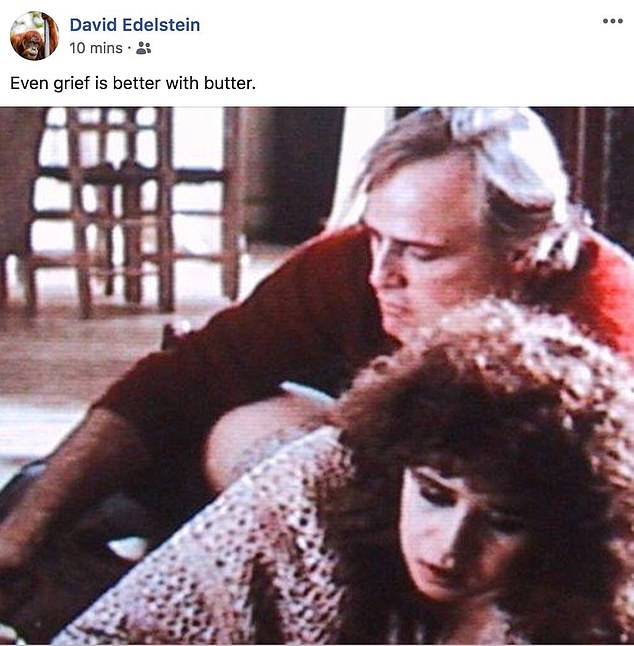 David Edelstein posted a still from a non-consensual sex scene from Last Tango in Paris on his Facebook page Monday and received a backlash for his caption. Marlon Brando, then 48, appeared with Maria Schneider, then 19 David Edelstein was axed after he said following director Bernardo Bertolucci’s death Monday: ‘Even grief is better with butter’ 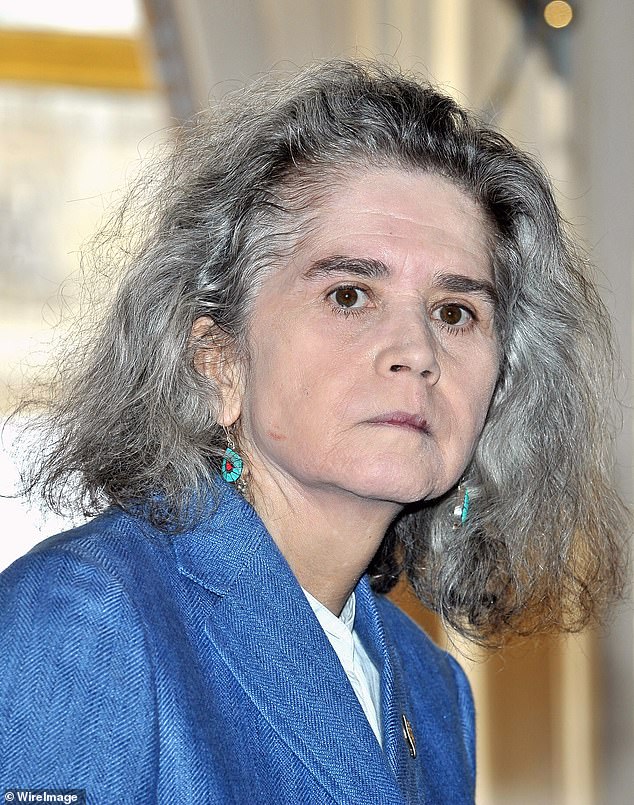 NPR, the network behind the WHYY-produced Fresh Air radio show Edelstein appears on, said Tuesday that the post regarding the character’s rape was ‘offensive and unacceptable’.

The statement continued: ‘Today we learned about film critic David Edelstein’s Facebook post in response to the death of film director Bernardo Bertolucci.

‘The post does not meet the standards that we expect from Fresh Air contributors, or from journalists associated with WHYY or NPR. We appreciate the apology David posted, but we have decided to end Fresh Air’s association with him, and have informed David accordingly.’

Among the backlash before he was axed, actress Martha Plimpton called for Edelstein to be fired.

She tweeted alongside a grab of his original post: ‘*warning: rape JFC, David Edelstein. All day I’ve avoided noting this mans death precisely because of this moment in which a sexual assault of an actress was intentionally captured on film. And this a**hole makes it into this joke. Fire him. Immediately.’

Edelstein said he was unaware of Schneider’s earlier comments about what she went through while portraying Parisian girl Jeanne and apologized, saying he now realized the joke was ‘grotesque’.

Others said that he should be forgiven for the mistake 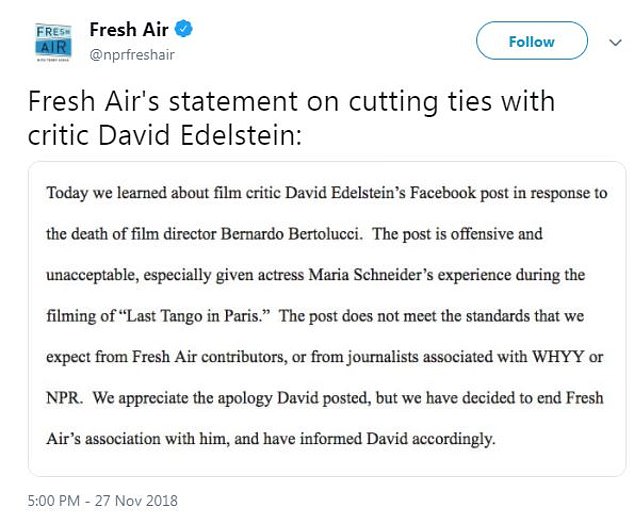 He removed the post and said: ‘I didn’t remember (the scene) as a rape and I didn’t know the real-life story about Maria Schneider.

‘The line was callous and wrong even if it had been consensual, but given that it wasn’t I’m sick at the thought of how it read and what people logically conclude about me. I have never and would never make light of rape, in fiction or in reality.’

While NPR has opted to let him go, New York Magazine where he is a member of staff, is taking more time to think about the next step.

‘We take David at his word that he was not aware of Maria Schneider’s comments about the making of Last Tango in Paris but we’re reviewing the matter internally,’ a magazine spokesperson told The Hill in a statement.

Bertolucci won notoriety due to its lurid depictions of sex in the controversial movie. 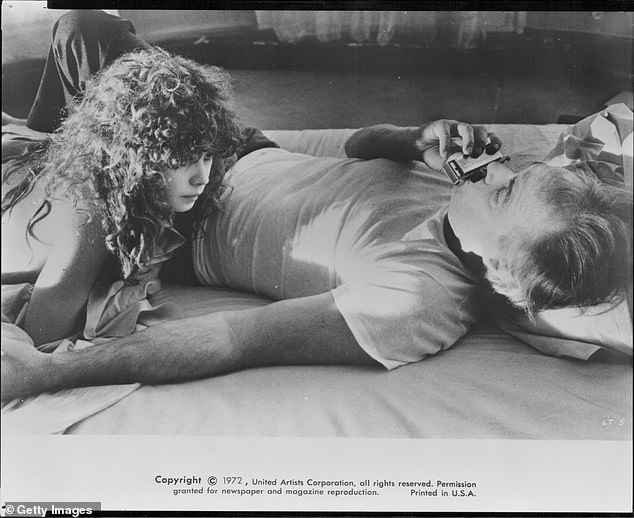 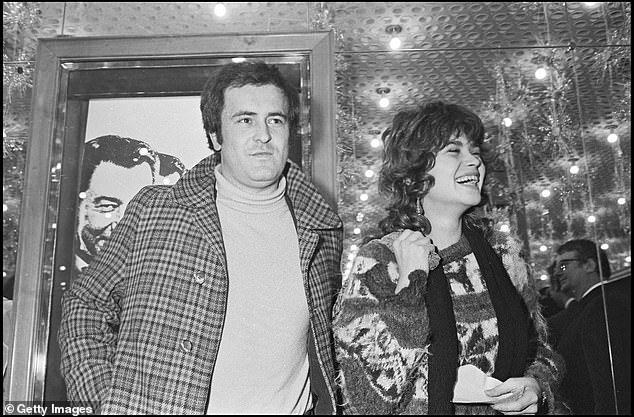 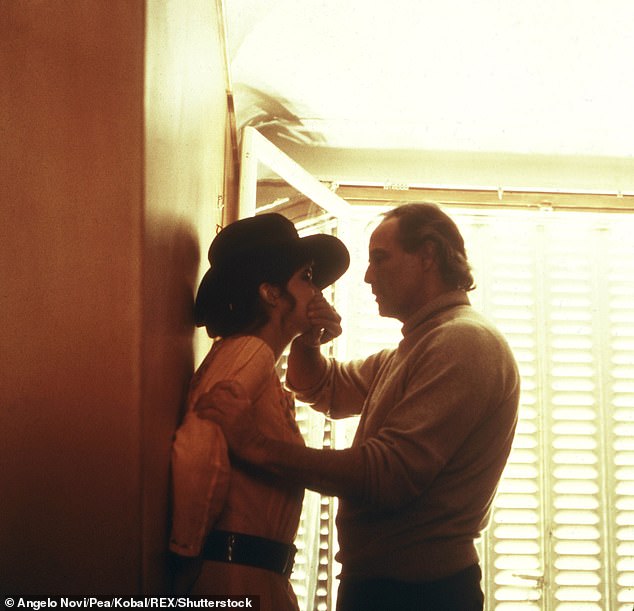 Outrage: Last Tango In Paris was banned in Italy just after its release in 1972, and was not released again until 1987

The movie was banned in Italy just after its release in 1972, and was not released again until 1987. The case went back and forth in the courts until the high criminal court banned the film in 1976 and ordered all copies confiscated and destroyed.

Bertolucci, Brando and Schneider, as well as the producer Alberto Grimaldi, were sentenced to two months in jail and a fine of $40 each – although the jail terms were suspended.

Schneider told the Daily Mail in 2007 interview that the simulated sex scene was unscripted, that she felt bullied by Bertolucci and unsupported by her co-star Brando.

Throughout the film they engage in some steamy clinches, the most famous involving Schneider face down on the apartment floor while Brando applies butter to her nether regions and performs a sex act on her. 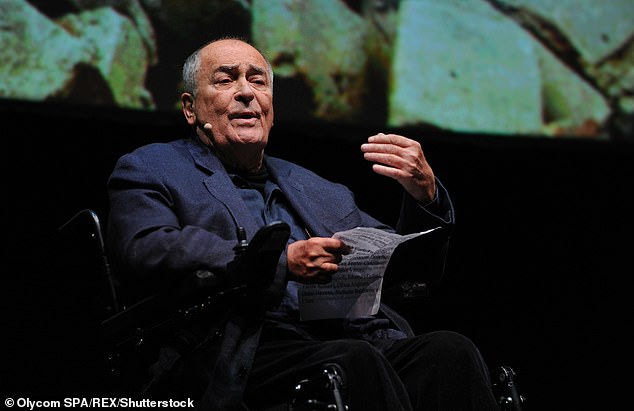 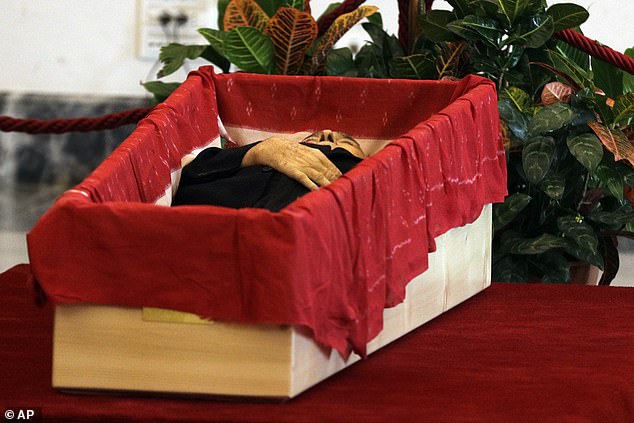 ‘That scene wasn’t in the original script. The truth is it was Marlon who came up with the idea,’ she revealed when she was 55-years old. ‘They only told me about it before we had to film the scene and I was so angry.

‘I should have called my agent or had my lawyer come to the set because you can’t force someone to do something that isn’t in the script, but at the time, I didn’t know that.’

Schneider added that she had always had a bad feeling about the motion picture because of its sexual content and her being too young to understand it.

She told the Daily Mail that after the movie she tried to take her own life and spiraled into drug abuse.

Due to the film’s nature, it was banned in many places all over the world but also received Academy Award nominations.

‘Marlon said to me: “Maria, don’t worry, it’s just a movie,” but during the scene, even though what Marlon was doing wasn’t real, I was crying real tears.

‘I felt humiliated and to be honest, I felt a little raped, both by Marlon and by Bertolucci. After the scene, Marlon didn’t console me or apologize. Thankfully, there was just one take.’

Schneider died of breast cancer in 2011. Two years later, Bertolucci admitted the scene had been sprung on her. He said he ‘wanted her reaction as a girl, not as an actress’.

He added: ‘I think she hated me and also Marlon because we didn’t tell her that there was that detail of the butter.’

Bertolucci admitted that not telling Schneider the plan was ‘horrible’. But he had no regrets though Schneider ‘hated me for her whole life’ as a result.

When a video of this interview came to light in 2016, there was outrage. There were calls for Bertolucci to be prosecuted and both he and Brando to have their film awards rescinded.

The director retorted there had been a ‘ridiculous misunderstanding’, claiming: ‘We wanted her spontaneous reaction to that improper use [of butter].

‘Someone thinks Maria had not been informed about the violence on her. That is false!’

He added: ‘Maria knew everything because she had read the script, in which it was all described. The only new thing was the idea of the butter.

‘It was this, I learned many years later, that upset Maria, and not the violence.’