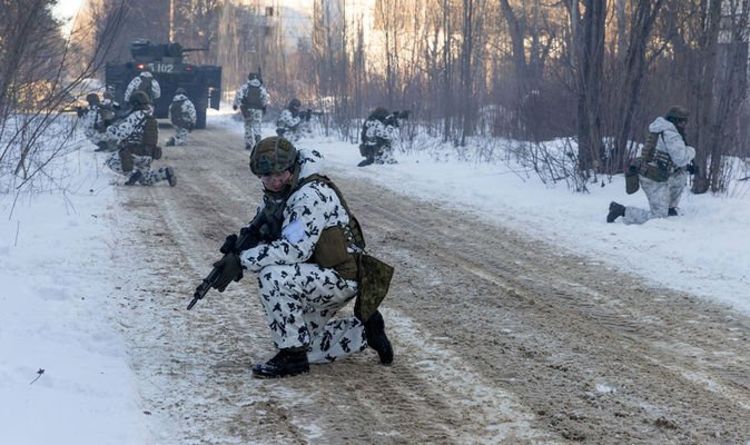 Ukraine military forces held urban combat drills on the deserted streets of Pripyat, a ghost town near the site of the 1986 Chernobyl nuclear disaster. The eerie exercises saw troops in winter camouflage gear fire at abandoned buildings and launch grenades and mortars into the sky. This comes as a leading Ukraine think tank expert named the date that Vladimir Putin could launch his anticipated invasion.

Alina Frolova, from the Centre for Defence Strategies, told the BBC that the 20th February could be the date of Russia’s invasion.

“On that day they will be ready and they will have maximum forces on the borders. The land will be frozen as well.”

Prior to Ukraine’s deployment to Chernobyl, a special radiation control unit made checks on radioactivity to ensure the area was safe.

Parts of the area are still highly radioactive, 36 years after the nuclear disaster

It is feared that Vladimir Putin could use the deserted town as a launchpad for a surprise invasion.

A direct highway running from Chernobyl to Kiev means Russian tanks could potentially storm the Ukrainian capital within just a few hours after crossing into the country.

One source said: “It’s the obvious way in for Russia if they have their eyes on a quick armoured strike against the capital.

“If the Russians pass through here, they’ll be in Kiev in two hours.”

Pripyat, once home to 50,000 people, has been deserted since the 1986 Chernobyl nuclear disaster which caused thousands to flee.

Most of the area around the abandoned nuclear plant is a wilderness of empty buildings and wildlife.

The meltdown was the world’s worst nuclear accident and sent clouds of radiation across much of Europe.

On Thursday, the Pentagon revealed intelligence about a Russian plan to release a video of a faked Ukrainian attack either on Russian territory or against Russian-speaking people in eastern Ukraine.

Coinciding with the Pentagon’s assessment, three of Russia’s largest state TV channels warned a Ukrainian attack on Russia was “imminent”.

TV reports in Russia claimed that Ukraine has amassed 120,000 troops along the border and were plotting artillery attacks.

Despite the US claims, Russia has repeatedly denied planning to attack its neighbour.