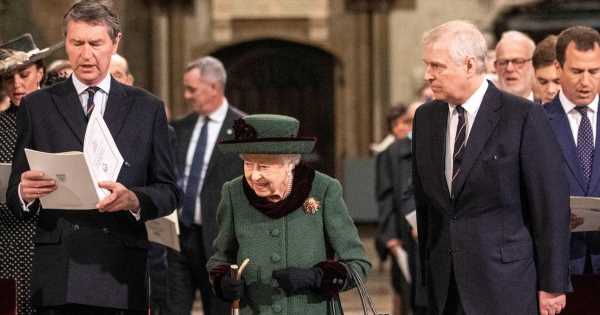 Palace officials are worried Prince Andrew has a "creep plan" to bounce back to royal life after aiding the Queen at Prince Philip's memorial service, a columnist has claimed.

The Queen walking hand-in-hand with her disgraced son at Westminster Abbey yesterday (Tuesday, March 29) shocked the public with many sharing their horror at the decision on social media.

The event was the Duke of York's first public appearance since he forked out £12million to settle a civil sex case with accuser Virginia Giuffre, who he claimed he never met.

It is also the first time he has made an appearance since he lost his military titles at the start of this year.

Andrew has always strongly denied the allegations against him and the settlement is not an admission of guilt.

Some royal watchers say the united front for Prince Philip's memorial showed that the monarch has made peace with her son for his controversial connection to convicted sex offender Jeffrey Epstein.

Daily Mail columnist Richard Kay went as far as suggesting taking the plunge to walk with Andrew may have been the "most challenging decision she has had to make as Queen".

Rather than quietly accept him as part of the congregation, Andrew who has never been found guilty of any legal wrongdoing, was at the thick of the action in front of TV cameras.

Kay wrote on Wednesday that the public are not alone in looking beyond the memorial service and wondering what is next to come from the monarch's third child.

He said: "Officials are wary of any softening of the position of no return to royal duties for the Duke of York.

"One insider spoke of a fear of ‘mission creep’ – that having taken so prominent a position at the memorial, Andrew might start appearing at other national events such as June’s Jubilee celebrations."

As royal writers weigh in on the divisive move by the Queen, Kay believes it could have been a rare occasion of the Queen publicly putting her family before her country.

He added: "Perhaps this was the Queen putting motherhood ahead of monarchy. Over the years she has been criticised for placing her duties to the Crown ahead of her family. Here then was the most powerful of reminders that, for all her devotion to service, being a mother is a higher purpose.

"Naturally some wonder if this shows a road to a future redemption for Andrew. If, at her request, people can accept the idea of Camilla as Queen, was this the monarch’s way of asking people to show a measure of forgiveness for her son?"