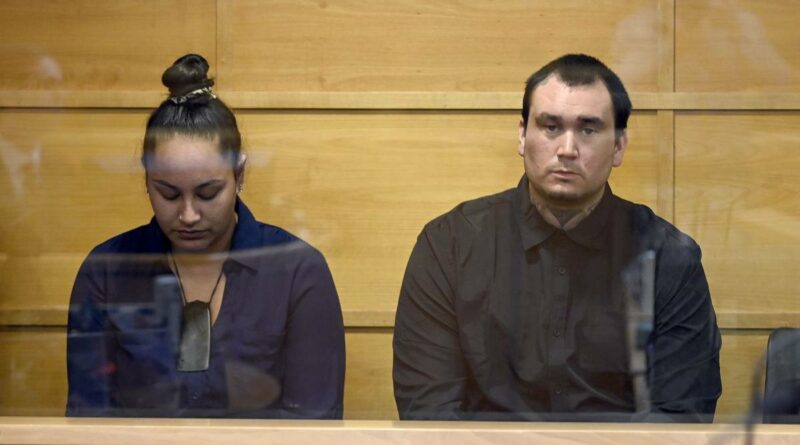 The jury also found his partner Sarah Lee Tare, 25,guilty of being an accessory after the fact to the murders in the Tauranga High Court this morning.

The jury’s verdict was unanimous.

The Crown evidence was that Samuel Fane and his late brother, Anthony Fane, killed the two men after Anthony Fane was convinced Lasslett had been having an affair with his partner Jessie Lee Booth.

Booth, a mother of two, was found dead at her Brookfield home on February 14, 2020, the day after Anthony Fane was shot dead by the police.

Simon Lance, the defence lawyer for a double murder-accused argued that the jury must find his client not guilty because the person actually responsible is his “deranged” brother who is now “six feet under”.

During her closing address to the jury, Crown solicitor Anna Pollett said Lasslett’s death was “fairly and squarely a premeditated killing” by the brothers.

She said Samuel Fane was “no mere bystander” and was either one of the principal offenders, a party to the murder by actively helping his brother or they formed a “common enterprise” to kill Lasslett and anyone else who got in their way.

She said Samuel Fane, armed with a sawn-off pump-action shotgun, clearly knew the plan and was also guilty of murdering Littlewood.

She said Littlewood had not been a specific target but it was a known likelihood anyone in the way of Lasslett’s death would be killed.

Pollett told the jury Lasslett and Littlewood were fatally wounded with the shotgun Samuel Fane sourced and took with him when he and Tarei fled to Christchurch to “evade arrest”.

Pollett argued Samuel Fane provided the blue Ford Territory used as transport and there was other “inescapable evidence” of Samuel’s involvement in the murders, including from several Crown witnesses, texts, phone calls and CCTV footage.

He messaged his cousin Rerepo Nicholas asking for ammunition, and told Tarei in a phone call on February 11 he was there to “support the bro” and “could not let him do it alone”, Pollett reminded the jury.

She said he also supported and encouraged Anthony in a prison call the pair made to brother Cody Fane on February 13.

In that call, Samuel Fane told Cody, who was in prison, that after Anthony revealed he had already done the “first one” Samuel said, “let’s go”.

Pollett said this was evidence Samuel knew his brother had killed Booth and was on a mission to also kill Lasslett.

In the prison call there was a “round of high-fives” between the three brothers, she said.

In the same prison call, Samuel told Cody Fane – “This was f***ing crunch time … This was judgment day for the slimy little c***”.

Both Anthony Fane and Samuel Fane’s fingerprints were on the shotgun, the jury heard.

Pollett said Tarei actively assisted her partner in several ways to evade arrest knowing he had been involved in the two alleged murders.

This included picking him and Anthony up after the shootings and buying razor blades so Samuel Fane could shave his head.

Pollett urged the jury to return guilty verdicts to the two murder charges Samuel Fane faces and the charge of being an accessory after the fact Tarei faces.

He told the jury they “could be forgiven for being confused” after the Crown presented “so many different theories” about the shootings.

Lance said if Anthony Fane was still alive he was sure the Crown would have charged him with the two murders.

The Crown evidence Samuel Fane, a family man with no previous convictions, would have “cold-bloodedly killed two men he did not know” did not make sense, he said.

There was no direct evidence linking Samuel Fane to the homicides, but a “stack of compelling evidence” Anthony was responsible, he argued.

“It was not a two-man job. It did not need to be because Anthony Fane was perfectly capable of doing the shootings alone.

“Samuel Fane’s mere presence at Ormsby Lane, I suggest was not because of a mindset of killing anybody, his purpose was to ‘support his bro’ if things went bad.”

“If Samuel knew what Anthony was going to do he would not have gone with him.

“I suggest it was Anthony Fane alone because we heard him say that in the prison call.

“It is also what Donna Fane says her son Anthony told her … he had carried out both the homicides at Ōmanawa and he did not want to get Samuel involved.

“If you haven’t already made up your mind, it is clear Anthony Fane was deranged. He was acting paranoid and psychotic … He had just killed his partner with a cross-bow.

“At no time during the prison call does Samuel Fane say he was involved in the shootings inside the dwelling but he does accept that he fired a pot shot at Daniel De Martin.”

De Martin was working at Lasslett’s property when shots rang out.

Lance said De Martin’s evidence was “unreliable” and “should be put to one side” especially his assertion there were two shooters firing 10 to 15 or even up to 17 shots.

Only eight cartridges were found at the property, he said.

“There is not a shred of evidence to support the Crown’s theory and you can quickly kick that notion into touch. Samuel Fane had no idea his brother was going to shoot those men.

“The person who is responsible is six feet under.”

Lance said the only “just and safe verdict” for his client was not guilty.

Dufty said when Tarei helped drive her partner to Christchurch she did not know he was an alleged party to the homicides.

“Yes, she knew something serious had happened, but her purpose was not to help Samuel to avoid arrest but merely to support him as anybody’s life partner would do.”

There was no direct evidence Tarei was told or had read someone had been murdered, nor of her being a party to the Fane brothers’ prison call, he said.

“The inferences the Crown suggests are just not there … It is absolute guesswork.

“If you apply your common sense, the only safe reliable verdict is not guilty.”

After more than five hours of deliberations on riday and resuming discussions this morning the jury returned their verdicts mid-morning.