Home » World News » On the edge: the psychology of the COVID rulebreakers

Recently, Victoria has become the pariah state. COVID-19’s ability to alienate is succeeding. Full of good intentions the government has assumed a punitive approach to enforce compliance. Each day Premier Daniel Andrews provides facts and figures. But COVID-19 is foxy. It sneaks and hides for a while, resurfacing when and where it is least expected. Public health management has assumed that people are reasonable team players who, faced with adversity, will co-operate for the common good. Rule beakers should be punished. 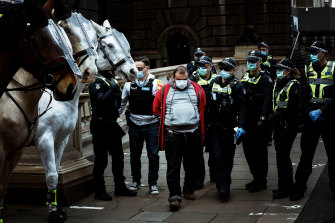 A man is detained by Victoria Police last month in Melbourne for breaching the Chief Health Officer’s directives under stage 4 lockdown restrictions.Credit:Getty Images

There are daily signs of rebellion. A woman goes walking, her mask neatly stashed under her chin. A man warns of loss of human rights. A new grandmother who can see neither her daughter or baby skids just within the rules to do so. A woman, arrested for not wearing a mask assaults a police officer. No one has heard their stories. But as case numbers fall and there is a prospect of lockdown easing, cracks in the system are deepening into fissures. There are suspicions about vaccination; COVID is not real, but a plot to seize control of people’s lives.

Policy on the run made by terrified government officials is scary. During the first lockdown the government did not help itself with its inconsistent messaging. People focussed on the rules, sought loopholes, losing sight of the reason they were asked to stay home. Society divided into those who "do the right thing" and the others "who do not". At its most extreme was public chastisement.

The mathematician John Nash showed us that the optimal global solution will not be the optimum solution for every group. Andrews’ method of leadership, bringing the people into the team under his captaincy, does not account for those who will never join. We have not heard about the consultations behind the scenes, or whether psychology specialists, religious and cultural leaders, and social workers have contributed to the government’s response. Their daily work brings them into contact with people whose day-to-day life can be on an emotional and psychological knife edge.

Psychoanalytic theory and practice goes far beyond the consulting room, into organisational and social analysis. It recognises the existence of unconscious processes. The analyst's consultative work can help develop an effective bridge between people and government.

Psychoanalyst Wilfrid Bion identified characteristics of people in groups: the dependency group – seeking a leader to make all decisions; the fight-flight group where the leader is attacked and or avoided; and the pairing group where the members of a group look to a couple within the group to produce a new leader. Earl Hopper’s fourth Basic Assumption addresses the helplessness and the fear of annihilation experienced in the face of trauma, resulting in inhibition of thought and attacks on knowledge and curiosity. Traumatised groups may act with incohesion, responding inconsistently, or in a fragmented way, using images intended to unite the team, or suppressing discussion.

Such traumatised groups can "personify aggregation and massification processes respectively’ Hopper explains. Within government a group might become ultra-bureaucratic, adopting forms of in-group-speak or succumb to apparently logical but binary thinking. Excluded from the conversation, people fear for their liberties. A second feature is the formation of sub groups – cults, or single idea groups. These include conspiracy theorists: such as the types who refuse testing because they believe COVID is a fascist plot. Others, feeling overlooked, unheard and frightened respond with mockery, derision, and violence.

The Premier’s task is to manage a multitude of differences. People must be listened to, consensus reached. Andrews has not shirked from his leadership. For that he is to be applauded. But if he pauses he will discover the resources he needs, including knowledge networks whose embrace, potentially, encircles marginalised and frightened people. He must listen to them.

Christine Vickers is a historian, accredited mental health social worker, and works as a psychoanalytic psychotherapist.