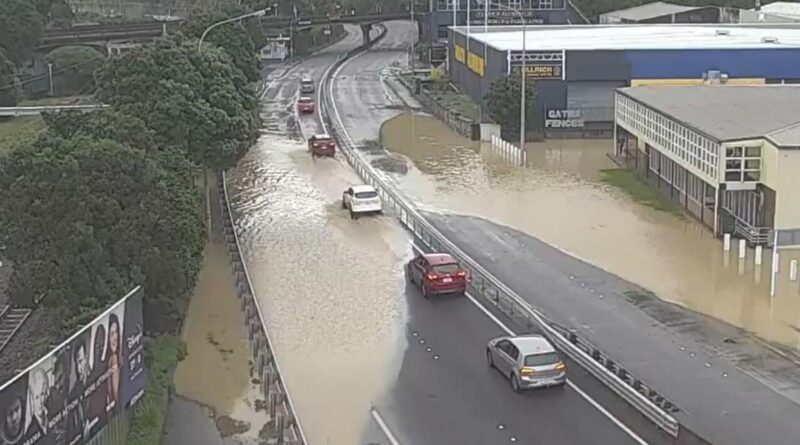 Wellington has been drenched with one-in-10-year rainfall and flooding that closed motorways.

MetService meteorologist Rob Kerr said the region got about 100mm of rain in 15 hoursending with a downpour yesterday afternoon.

“Heavy-ish rain fell on and off for most of the day and then bang, that really super-heavy blast came through right at the end.”

Kerr said it was a once-in-a-decade rainfall.

A strong wind warning for Wellington and Wairarapa south of Featherston has now been lifted.

However, a strong wind watch remains in force for the rest of Wairarapa, the Tararua District, and Hawke’s Bay south of Hastings until early this afternoon.

Yesterday gusts of 120km/h were recorded in Kelburn and 135km/h on top of the Remutaka Hill.

NZTA advised one northbound lane on State Highway 2 from Ngauranga to Petone reopened at 1am.

However the temporary speed limit is50 km/h because of flooding and debris.

Kaine Thompson spent four hours stuck on the motorway yesterday and another two and a half hours navigating diversions before finally getting home to Eastbourne at 10.30pm.

“We were diverted to Ngauranga Gorge and then made our way to State Highway 58 from Plimmerton, but with other road closures and heavy traffic, it was slow going across the Haywards Hill for all of us.”

Thompson said when it became clear they would be stuck on the motorway for a while, they decided to watch Netflix.

As the rain eased, some children joined together and played football on the slip road while other stranded passengers took the chance to chat to one another, Thompson said.

Thompson was frustrated by what he said was a lack of information about whether there would be a diversion or an estimated time for the road to reopen.

“When a police officer says ‘sorry, I don’t know anything’, you begin to think – well, does anybody?”

The left lane of State Highway 2 before the Petone overbridge is still blocked by flooding.

Motorists have been urged to take extra care, drive to the conditions and expect delays while crews restore the state highway network.