COVID-19 cases could initially double every two days as a result of the new Omicron variant, but authorities are confident Christmas plans are safe from last-minute domestic border closures and gathering restrictions.

Chief Health Officer Brett Sutton expects the state to follow a similar trajectory to NSW, where new modelling suggests Omicron could send case numbers soaring to 25,000 a day by the end of January, as both states push ahead with plans to ease restrictions, including the scrapping of vaccine mandates in some low-risk settings in Victoria from Thursday. 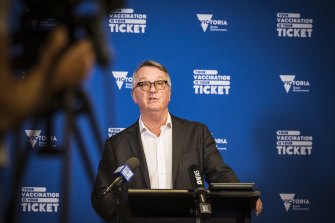 However, shoppers will still need to wear masks indoors after fears that hundreds of people were exposed to the Omicron variant at Fitzroy and Collingwood nightclubs on Friday night, prompting warnings of a possible superspreader event.

Early data suggests Omicron is highly transmissible but less likely to cause serious illness than the Delta variant. Victoria is one of the world’s most inoculated jurisdictions, with 92.2 per cent of people over 12 double vaccinated. Authorities remain confident booster shots will significantly reduce the spread of Omicron.

The WA government on Wednesday tightened border restrictions to NSW and urged their residents to come home immediately as the state’s daily cases surged back past 1300. Victorians are already banned from entering WA except in extraordinary circumstances.

Professor Sutton said on Wednesday there were 10 confirmed cases of Omicron in Victoria and experts had seen globally that infections were doubling every two to three days.

“I think it’s pretty clear that it’s a very steep trajectory wherever we’ve looked, but where it tops out is unclear,” he said.

Professor Sutton said there was no need for Victoria to close the border with NSW.

“There’s no proportionality to closing borders with NSW. We’re going to see numbers here that will follow a similar trajectory [to NSW predictions], I suspect,” he said.

“It’s another punch that none of us wanted, but we’ve always rolled with the punches.”

Mask rules were expected to be wound back this week but Health Minister Martin Foley confirmed they would remain to ensure existing arrangements could be locked in through Christmas and into the new year.

“One word – Omicron – has changed the landscape,” Mr Foley said.

People under 18 will no longer need to prove their vaccination status in a move that has been welcomed by industry groups after retail staff reported being assaulted and abused in the workplace.

Prominent epidemiologists Catherine Bennett and Tony Blakely supported the requirement for shoppers to wear masks indoors, saying it was a small price to pay for the freedoms Victorians were enjoying. 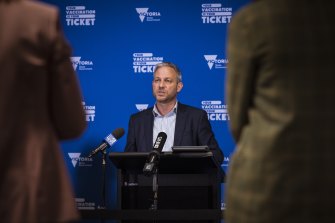 Professor Blakely said Omicron could still test the healthcare system if cases exploded, but masks reduced the potential for transmission by half.

“We’re going to have waning immunity [because it has been a few months since people have been fully vaccinated with limited booster shots rolled out] so I’m expecting to see cases go up a lot by Christmas.

“The effects of Omicron won’t play out for another month. It may be good or bad, we don’t know, but it means case numbers will go up … you may still see enough hospitalisation to put stress in the system.”

Professor Bennett said there was no point fretting about a superspreading event over Christmas, said decisions such as retaining masks in retail and vaccine requirements in high-risk settings such as nightclubs were sensible.

“Worrying? No. Surprised if it happens? No,” she said. “Don’t let it stop you having your Christmas event, but think about how you have it as safely as possible.”

People could meet outside and take rapid antigen tests before visiting vulnerable family members, she said.

Professor Bennett believes there is probably more Delta in the community than testing has shown because hospitalisation rates have grown. The number of people with COVID-19 in intensive care has jumped to 84, 91 per cent of whom are not fully vaccinated. Ten days ago, there were just 40 people in ICU.

Faith groups and industry groups including the Franchise Council of Australia, Australian Retailers Association and the Victorian Chamber of Commerce also welcomed the government’s decision to scrap vaccine mandates in a range of settings, saying the “onerous” entry requirements were putting a huge burden on staff.

“[Franchise Council of Australia] members have been abused on a daily basis when enforcing the rule, which they are not resourced or trained to deal with,” chief executive Mary Aldred said. “Given the high vaccination rates, there’s no need to continue with the onerous entry obligation for retail premises.”

VCCI chief executive Paul Guerra said the mask rules would remain a “significant disincentive” for people to go to work and support businesses.

He also urged businesses to continue deep cleaning their premises if a COVID-positive person visited the facility despite government guidelines softening cleaning requirements.

“[Wednesday’s] announcement continues to pull the handbrake on our recovery when we should be hitting the accelerator,” Mr Guerra said.

The Islamic Council of Victoria’s Adel Salman said mandates were placing burdens on mosques, and leading to unnecessary tension, while Archbishop Peter Comensoli said the Catholic Church looked forward to a time when everyone could participate in all aspects of society, regardless of their vaccination status.

Vaccine and public health experts have been calling for state officials to end the lockout of unvaccinated people when immunisation rates topped 90 per cent, arguing that level of high coverage would be enough to protect the state from any increased transmission risks.

Vaccine mandates have been one of the flashpoints in pandemic hostilities that pitted Victorians against authorities, leading to mass rallies over the past few months, and at times violent threats directed at politicians, public servants and retail staff enforcing the rules.

A worker at a Dymocks bookstore in Melbourne’s CBD who was checking the vaccination status of customers was allegedly pushed down the escalators by a shopper who refused to check in using a QR code.

In another incident, a cup of hot coffee was thrown over a worker, while retailers reported staff being beaten up and shopping trolleys thrown at them.

Professor Blakely said the difference between unvaccinated and vaccinated people transmitting the virus was now negligible, given it has been about two or three months since a vast majority of the population were fully immunised, and the data around the world has shown immunity levels begin to wane at that mark.

“At such a high population coverage, you can’t keep the unvaccinated out of everything forever, there has to be a turning point somewhere and we achieved that,” he said.